A Distinguished Collection: Letters from the Great Composers

A lthough I have been associated with Sotheby’s for nearly forty years, I have never been involved with a collection where none of the items has been on the market for at least seventy years. Every item in this extraordinary Music sale is fresh, largely unknown and unpublished. The owners were connoisseurs, rich, discerning, discreet, highly-cultured and private. As the atmosphere darkened in the 1930s they moved to Switzerland and then to the United States. The collection was largely preserved by their heirs and three generations later it is returning to the market.

Music is at the heart of the collection and the first sale (of three) is devoted entirely to the subject. There is an astonishing number of discoveries: new letters by Bellini, Berlioz, Brahms, Donizetti, Dvorak, Liszt, Mahler and Puccini, all of which shed new light on their biographies and musical activities. Schumann writes to Spohr about the composition of his First Symphony; Donizetti reveals his pathetic, addled state in the final stages of syphilis; Berlioz discusses the composition of an opera with the greatest librettist of the day, Scribe.

The great coup de théátre is the 36 letters of Verdi to his librettist Salvatore Cammarano about the composition of 5 operas including Il trovatore. They also contain Verdi’s unwritten Shakespeare project: King Lear, an opera on his mind for 40 years, with scarcely a note set on paper. Almost all these letters are unknown and unpublished. It is an unparalleled Verdi discovery, one to set scholarship ablaze with interest in the 21st century.

While most of the items in the first sale are letters, there are stellar music manuscripts: a canon by Beethoven “Ewig dein” and the lost autograph of one of Brahms’s greatest songs: the “Geistliches Wiegenlied” Op.91 no.2 written for one of the composer’s greatest friends, Joseph Joachim. The version in this manuscript is extremely interesting in that it contains new and unheard music by Brahms. There are also wonderful manuscripts by Chopin, Mendelssohn and Schumann and operatic music by Verdi and Rossini, both almost unattainable now on the market.

The final element of the sale is an extraordinary collection of photographs of composers set forth in an imaginative parade on the endpapers of the catalogue. Connoisseurs of moustaches will marvel at the examples of Leoncavallo, Puccini, Massenet and Boito. Brahms is represented clean shaven and with full white beard in a marvellous photograph which shows the composer as bibliophile, surrounded by books.

Perhaps the most surprising item is the invitation to the wedding of Wagner and Cosima von Bülow sent to Boito, later librettist of Verdi’s Otello and Falstaff, one of the few links between the two greatest opera composers of the nineteenth century. 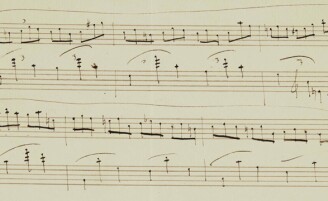