A Delightful Parrot – With a Secret

One of the pleasures of working at Sotheby's is the large array of unusual and beautiful objects that find their way through our doors. Just recently an exquisite and charming little gold, polychrome enamelled and gem-set parrot flask came to us from India.  Not literally of course - the object was produced in nineteenth century India - but to see this delightful parrot perched on a forked branch, decorated with translucent emerald green and red enamel, with faceted gems and a lotus blossom in its beak and featuring a delicate seed-pearl stopper, does indeed transport us to an exotic setting. It is hard to imagine this level of craftsmanship and elaborate detail devoted to a modern object - one which even hides a secret function.

Alexandra Roy, Deputy Director in the Islamic Department in charge of the upcoming October 19 Arts of the Islamic World sale, says: "These objects were used decoratively on a table, and this parrot belongs to a group of three, though the unusual feature is that the bird is in fact a 'hidden flask'. The bird appears to be a purely decorative enamelled bird, but it is actually a flask or chuski.  It can be filled through the head which opens by turning the crest and drunk from the lotus bulb which it holds in its beak by removing the stopper, attached to a delicate seed pearl chain. The drink would be something like wine or liquid opium or bhang. A chuski would be placed discreetly amongst other purely ornamental enamelled birds as was fashionable at the end of the nineteenth and even twentieth centuries. This particular one is admirably crafted, and I love its playfulness."


Set within the group to which it belongs, it speaks of elaborate and exquisite salons, of appreciation of fine detail and the ambiance of a by-gone era. That said, it would also look ravishing in a study-library where the tedium of bookishness could be occasionally broken by a surreptitious sip from an unobtrusive flask. Now that would be a savvy acquisition! 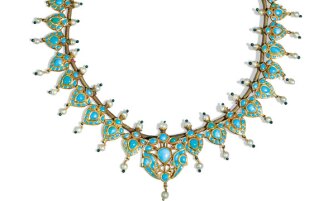 Past Auction
Arts of the Islamic World
19 October 2016 | 11:30 AM BST | London
Stay informed with Sotheby’s top stories, videos & news.
Receive the best from Sotheby’s delivered to your inbox.