A Cultural History of Old English Spoons Since the 17th Century

O ld English silver spoons of the type represented in the upcoming The Neil & Gina Smith Collection sale by the unique Campbell 'lion sejant' set and the Apostle spoons, were obsolete by the time they came to the attention of collectors. References to such spoons are littered throughout wills and inventories as well as literature of the 16th and 17th centuries; and the spoons themselves survived among various collections. Lancelot Bathurst (1628?-1677/78), an uncle of the 1st Earl Bathurst, had '12 Apostles Spoones' until they were stolen from his house at Wilmington, Kent in 1665. Surviving sets of twelve today are mouth-wateringly rare.

There is a story concerning spoons, passed down from the 1650s, in a collection of jokes and anecdotes formed by Sir Nicholas L'Estrange (1604-1655). It finds William Shakespeare, as godfather to Ben Johnson's son, wondering what he should give the child as a Christening present. Says Ben to Will: 'Why so melancholy?' The latter responds that he is not at all sombre, quite the reverse because he has just hit upon the idea that the gift should be 'a douzen good Lattin [latten = cheap metal alloy] spoones,' so that he (Ben) can 'translate them' (i.e. turn them by alchemy into silver).


A dozen spoons for a new-born child, we are told, was an opulent gift; four with figures of the Evangelists as finials were given by those who could afford a little less; and a single spoon, with the figure of the child's patron saint, by the least affluent. Such spoons, with their distinctive fig-shaped bowls, narrow faceted stems and cast, often gilt, terminals disappeared from goldsmiths' stock-in-trade during the third quarter of the 17th century. The new patterns and forms which took their place, eagerly adopted in England from Europe, are the prototypes for spoons made today.

In 1773, a single Apostle spoon was sent by the enthusiastic antiquary, the Rev. William Cole (1714-1782) to his friend Horace Walpole (1717-1797) of Strawberry Hill. These were well-educated men of the sort who, in 1707, established The Society of Antiquaries in London. They busied themselves examining old documents and searching for anything which might shed light on our collective manners and customs of the past. One such was a Mr. Row of Derbyshire, who in 1768, informed the editor of The Gentleman's Magazine that he had seen in his time, 'two or three sets [of Apostle spoons], but at present they are scarce, being generally exchanged for spoons of a more modern form, and consequently melted down.' Another of the magazine's correspondents, in 1785, wrote to say that such spoons 'are not all yet melted down.'

Indeed, they were not. In fact, there was the beginnings of a lively trade in old, out-of-fashion silver at this time. On 1 June 1776 Walpole wrote to Cole, 'I have lately purchased three apostle-spoons to add to the one you was so kind as to give me.' When the contents of Strawberry Hill was sold at auction in 1842 and Walpole's collection laid out for general inspection, his four Apostle spoons joined many others emerging onto the market for a new generation of collectors.

By 1890 and the Exhibition of the Royal House of Tudor at The New Gallery, Regent Street, London, the study of old spoons, their patterns, marks and histories had attracted a number of serious researchers. On that occasion, rare examples were lent by Charles James Jackson (1849-1923) who went on to publish outstanding books on the history of old English silver. He led the way for later authorities, chief whom in the field of pre-1660 spoons were Commander and Mrs. How. 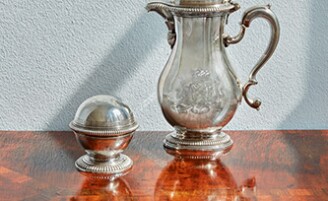