7 Things to Know About Stamp Collecting

By Sotheby's
Stamps Online (from 2-11 April) offers an unprecedented opportunity to acquire some of the most historically significant stamps ever issued in the United States. The single-owner, online-only sale includes exceptional Postmasters’ Provisionals as well as rare Federal Hunting Permits.

1. The origin of stamps:

The first stamp in history is believed to be the One Penny Black of Great Britain from 1840. It was created at the beginning of Queen Victoria’s reign, bearing the likeness of the young monarch. Stamps were originally introduced as labels, so that mail could be pre-paid by the sender.

Prior to this innovation, the recipient paid for all mail, which made for an expensive and inefficient system. Almost ten years later, stamp usage had become ubiquitous throughout the world, with almost every major country issuing its own stamps.

Since the introduction of labels in 1840, stamp collecting has consistently ranked as one of the world’s most popular hobbies. In the United States, stamp collecting reached its peak in the mid-20th century; at the time, one in seven families owned a collection.

President Franklin Delano Roosevelt, an avid stamp collector and member of the American Philatelic Society, works on his collection in the Oval Office. Photo: Hulton-Deutsch/Hulton-Deutsch Collection/Corbis via Getty Images.

In comparison to other collecting fields, there are two major advantages to acquiring stamps: initial cost and memory association. Frequently, precocious collectors gather their first stamps at no cost – the collectibles are delivered via post to their homes and mailboxes.

In addition to low cost, many collectors associate stamps with joyful childhood memories, as stamps are regularly attached to gifts or postcards. These small, skillfully executed prints are not only aesthetically pleasing, but they additionally have the ability to transport a collector to the past. Each stamp illuminates a story – whether it is its designer, printer, edition, or function. It is no surprise that the earliest recorded stamp collection was a Geography instructor’s teaching tool.

There are almost unlimited options when acquiring a stamp collection. One can collect mint stamps, used stamps, stamps attached to envelopes, singles, pairs, or even full sheets. It is commonplace for a novice to focus their efforts on the stamp selection available in their home country, and then later narrowing or expanding their collecting confines to an individual specialty.

A collector may hone in on a specific theme; in recent years, collecting themed stamps has increased in popularity – today almost every subject has appeared on a stamp – from animals, coins, and cars to fine art, famous figures, sports, sciences, or even stamps printed on stamps.

Once a collector accumulates a reputable collection, the individual often centers their future procurements to stamps that are more difficult to obtain. In the United States, a collector may search for a few of the country’s original issued stamps, which date to 1847. If one hunts even further, they may find stamps that were produced in 1845 and 1847, as certain Postmasters distributed their own stamps or so-called Provisionals. As with most collectibles, early stamp issues are more valuable due to their delicate nature and rarity.

5. How to identify stamps:

For almost every country in the world, publishing houses release catalogues that survey stamps issued in their respective nations. For Britain, Stanley Gibbons is responsible and in the United States, Scott is the publisher; in France, the catalogue is from Yvert and Tellier and within Germany, the company is known as Michel.

The Specialized Catalogue of United States Stamps is published annually and lists every stamp issued to date. It is both informative and well illustrated; the catalogue serves as a tool to help identify and grade every stamp. It offers information on Provisionals, Regular Stamps, Air-Post Stamps, Possessions and Territories, Civil War Confederate Stamps, Official Stamps and Revenue Stamps, as well as Essays, Proofs and various other areas. Significantly, the catalogue provides a retail price for each stamp – an invaluable asset to any collector.

6. What are the most famous stamps:

The most well known stamp in history is widely considered to be the storied, used 1856 IC Black on Magenta from British Guiana, which was discovered by a school boy in 1872. It most recently sold at Sotheby’s in 2015 for $9.4 million. 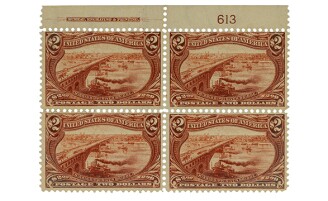 A substantial amount of resources are available to any prospective stamp collectors. Once a collector selects an area of desired stamp specialty, reading materials are especially beneficial, such as past auction catalogues, as they outline the availability and value of specific stamps.

Many stamps and covers (envelopes) have marks and notations from their previous owners, which may serve as invaluable information on the piece’s provenance.

It is additionally useful to locate an established auction house or trusted dealer, preferably a professional who is a member of the American Stamp Dealer’s Association, which is an organization that sets high standards for its membership.

Finally, one can always scour the mail – where it all began.