7 Things to Know About Coin and Medal Collecting

1. Who collects.  Coins have been collected almost since they were first made more than two and a half millennia ago.  During the Renaissance, the Medici and Este families had renowned collections.  Today, coins are collected by movie stars, business tycoons, bankers, Silicon Valley titans, fashion designers, sports stars, as well as librarians, teachers, and kids.  In other words, coin collecting attracts individuals from across the economic, age, and professional spectrum.

2. Why collect.  Coins and medals reflect the artistic, economic, and political history of the world.  For example, President Theodore Roosevelt commissioned America’s greatest sculptor, Augustus Saint-Gaudens, to redesign some of the nation’s coins;  Brutus struck a coin to ‘celebrate’ his murder of Julius Caesar; and the infamous 1933 double eagle, sold at Sotheby’s in 2002 for a world record $7,590,020, embodied the depths of the depression, criminal intrigue, and the end of gold coins as a part of the American monetary system.

3. What to Collect.  The world and thousands of years are at your feet.  But United States coins and medals are one of the most actively collected areas.  Collectors can focus on a single denomination; for example Morgan silver dollars, made between 1878 and 1921, are the most popular of all US denominations.   Or one can collect examples of all the differing designs produced, a particular metal, or period; and with medals, for example, Indian Peace medals provide a glimpse into the interaction of two disparate cultures.

4. Grading.  How well a coin has survived the ravages of time can not only have an affect on its aesthetic properties, but can play an integral role in establishing its value.  For many years, grading was adjectival, with, for example, ‘poor’ condition and ‘brilliant uncirculated’ being two terms that are self-explanatory.  Definitions such as these are still utilized in the speciality areas of ancient and most foreign coins.  Within the past few decades, grading United States coins has been on a scale of 1-70.  The numbers from ‘60' and above representing Mint State coins, anything MS 65 or above is considered to be of ‘gem’ quality.

5. Third-party grading.  In 1986, in an effort to protect collectors from unscrupulous or erratic grading standards, a company called the Professional Coin Grading Service (PCGS), was formed by a group of concerned coin dealers.  Coins would be submitted to PCGS for an unbiased, third-party opinion as to a coin’s level of preservation and authenticity.  Graded on a scale of 1-70 (70 representing perfection), coins were assigned a number, and sealed into a tamper-proof plastic holder.  The concept was revolutionary, and quickly became an essential part of collecting United States coins.  A few years later a firm called Numismatic Guaranty Corporation (NGC) was founded and the two companies today represent the standard.  A decade ago, in an effort to further ensure the purity of the grading system, a company called Certified Acceptance Corporation (CAC) was established to assign its imprimatur on already encapsulated coins as exemplars of their respective grades.

6. Grade and Price.  In no area is the quality of preservation more important than United States coins.  For example, a heavily worn Morgan silver dollar made in San Francisco in 1884, can be had for under $50; but the example in the Ralph Stone Collection is in virtually perfect condition (MS 67); probably the finest to ever appear at auction, and estimated to bring $300,000-500,000.

7. How to collect: As with all collecting areas, it is best to find reputable dealers and auction houses from which to buy.  When deciding on an area to specialize in, it is always advisable to read a book or two on the subject; and the internet offers many open-access price data-bases and informational sites.  Using these resources will enhance the collecting experience by adding new dimensions, and make you a more knowledgeable and savvy collector. 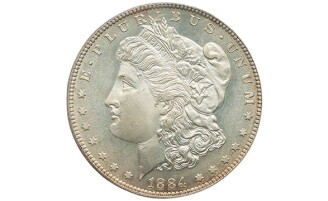