F rom Parisian streets to country peasants and regal sporting scenes, the most prolific themes of 19th century European art range tremendously in subject matter. A curated sampling of five exceptional paintings from the genre will be on exhibition in Hong Kong from 28 September to 3 October. The works will be offered in various sales and exhibitions at Sotheby’s Hong Kong and New York in 2018 and 2019, with the exception of a tender portrait by William Bouguereau which is available for private sale. Below, discover more about each of the paintings on view.

The intense sensuality of The Girl from the Sabine Mountains is immediately felt. With her eyes blissfully closed and mouth open, the viewer becomes a voyeur. She incites us to feel the heat on her back, the cool brass earring resting on her cheek, and the rustle of her blouse cinched tight by the ribbons of her corset.

William Bouguereau’s Livre de prix has remained in the same private collection since 1916, unseen by the public for over a century. In its original frame and essentially untouched condition, it is an extraordinary example of brilliant technique applied to the artist’s most celebrated subject.

Going Out at Epsom was the centerpiece of a trio of racing pictures that Alfred Munnings exhibited at the Royal Academy in 1931, the culmination of two seasons of painting at Epsom Downs, site of the famed Derby Stakes. It is among Munnings’ very best paintings of a racing subject. In it, two thoroughbreds, their jockeys up, are led from the saddling enclosure to the start line of the world famous track, while the betting public, a jockey or two, and a top-hatted owner look on.

Previously unknown to collectors and scholars, Jean Béraud’s Un Grand Boulevard, Jour de Pluie presents an amazing discovery for the artist. The painting has remained in the same family’s collection for generations, and this iconic composition is filled with the artist’s distinctive characters on a bustling Parisian boulevard.

By the end of the nineteenth century, William Bouguereau had enjoyed decades of success as one of the most celebrated painters in both Europe and North America. Dated 1898, La révérence [The Curtsey] is set in Bouguereau’s private garden in La Rochelle, a port city on the western coast of France, where he spent summers with his family. He captures a sweet moment of play as the little girl greets the viewer with a curtsey. 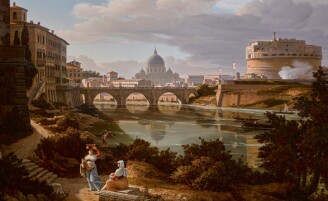 Selling Exhibition
A Selection from Old Masters / A Brush With Nature
Stay informed with Sotheby’s top stories, videos & news.
Receive the best from Sotheby’s delivered to your inbox.