By James Reginato
J Tomilson Hill is unveiling the Hill Art Foundation: a curatorially playful Manhattan space for his collection of museum-quality works.

Hill is referring to the annual number of passers-by on the adjacent High Line, the elevated linear park, who will be able to peer into the large windows of Hill Art Foundation, which is located on the third and fourth floors of the Getty, a 12-storey Peter Marino-designed development that was recently completed in Manhattan’s Chelsea neighbourhood. 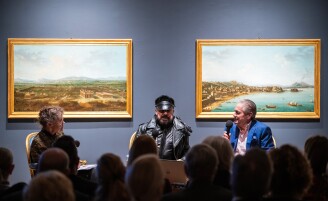 “Everybody will be able to see right in,” says Hill enthusiastically. “Everyone can come right in off the street and be part of it. That’s the idea. ”For Hill – best known as Tom – and his wife, Janine, the Foundation is the culmination of four decades of passionate collecting and connoisseurship. The Hills have acquired stellar works in three distinct areas: Renaissance bronzes, Old Master paintings and post-Second World War art. “It has to be of the highest quality,” explains Tom, “an example of an artist’s work that is as good as it gets.”

Inside the couple’s magnificent Manhattan apartment – also designed by Peter Marino – Hill has long enjoyed setting up dialogues between his collected masterpieces. “We want the works of art to have a conversation. I will, for example, place a Venus figure by Giambologna in front of a Twombly blackboard piece because the curves of the Venus match the curves on the blackboard,” says the Manhattan-born, Harvard-educated Hill, who serves on the boards of the Metropolitan Museum of Art and Friends of the High Line, among many other philanthropies.

Opening his own foundation has been a long-time aspiration. “I decided about 10 years ago that I would do it if I could find the right space and come up with the right model. In the art foundation world there are all these different models – from Eli Broad to Peter Brant and Mitch Rales at Glenstone. I had to come up with a model that was going to work for my interests.

“I thought it would be great, in New York City, where I was first exposed to art, to share my collection with the public, to allow visitors to see how I think about art, how I juxtapose pieces, as I do in my homes. While the foundation is totally personal, it is about sharing.”

A few years ago, as soon as he heard about the plans for the Marino-designed Getty – a 12-storey steel and glass geometric tower – he knew it would be the right location. “It really has the perfect feel for New York,” says Hill.

His next challenge was to hire an executive director who would help make his vision a reality. “I had a very clear idea of the person I wanted – someone experienced in the culture of an organisation I respect, as well as someone who is entrepreneurial. A can-do person.”

“Then one day I got a call from Kara Barnett, executive director of American Ballet Theater, who I know because I was on the board of Lincoln Center Theater. She said, ‘I’ve got your director.’”

Barnett was referring to Sarah Needham, who had worked in various roles at Lincoln Center before she became a programme officer at the Stavros Niarchos Foundation. During her tenure there, the New York-born Needham, who holds a BA in Art History from Williams College and an MBA from New York University’s Stern School of Business, distinguished herself through her successes overseeing grant-giving to arts and education nonprofits across the globe, with a specific focus on making the arts more accessible, particularly to young people.

“As soon as I met Sarah, it was instantaneous. I knew I’d found the right person,” says Hill. “I cannot imagine a more capable person to partner with me in organising our exhibitions, in presiding over our permanent collection and in developing a truly innovative programme in education.”

Needham’s old boss Barnett is similarly enthusiastic. “Sarah has a rare combination of aesthetic intelligence, emotional intelligence and business acumen. She is wired to build strong and lasting partnerships.”

For Needham, the opportunity to help build a foundation from scratch was irresistible. “I love the challenge of getting it up and running,” she says. “Every day is different.”

I have a theory that great art is produced when culture and economies are going through major game-changing, often technological, breakthroughs.

Creating an education programme and providing accessibility to young people is a key goal for Hill and Needham. “Breaking down barriers is very important to us,” she says. “For many people, walking up the steps of the Metropolitan Museum of Art can be intimidating. We want everybody to feel they are welcome.”

Along with Hill’s daughter, Astrid, Needham is helping to broaden the scope of the collection. The foundation has begun to acquire contemporary works by mid-career artists as well as by Chinese makers. Thus Hill has found himself on a whirlwind of studio visits, from Brooklyn to Beijing.

“I have a theory that great art is produced when culture and economies are going through major game-changing, often technological, breakthroughs. This is China’s moment. You can’t be a businessman today without thinking about China and coming to terms with it.”

In mid-January, Hill Foundation will open its doors with an inaugural exhibition featuring 21 works by Christopher Wool. “As Richard Armstrong said, ‘what Jackson Pollock started with abstract expressionism, Wool is ending with an exclamation point’,” Hill says. Following the Wool show, Hill envisions a variety of exhibitions, including one exploring portraiture and another pairing Francis Bacon and Andy Warhol.

Following his 70th birthday, Hill recently stepped down from his longtime position as vice chairman of the Blackstone Group, though he is hardly retiring. “I built a business there that went from $1 billion to $80 billion in assets. I will now team up with another platform, using technology to make decisions on how to invest better.”

As he enters what he refers to as his “final chapter”, he is intensely focused on the present. His new foundation, he emphasises, is not a museum.

“A museum implies permanence and some kind of hierarchy of scholarship. When my wife and I are no longer here, this foundation won’t be here. Our collection is highly personal, and I want the space to express how I feel about art, as opposed to some kind of framework that a museum would say I have to follow.

“Here, if I want to juxtapose a Pontormo with a Warhol, I get to do that!”