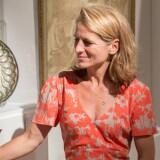 A graduate from the Sorbonne and Ecole des Hautes Etudes, Ulrike Goetz joined Sotheby's in 1997 from the Sculpture department of the Louvre, after working for three years with the Alain Moatti Gallery. As Head of the Sculpture department in Paris, Ms Goetz has developed many close international connections to private collectors, museum professionals and dealers. She has contributed to many important sculpture sales in Paris, such as the legendary Chateau Groussay sale in, our first international auction in 1999.

She was in charge of the Dormeuil Collection of important Medieval Enamels and Ivories in 2007, where a 14th-century ivory diptych achieved a record price of €4 million, as well as the sales of the collections of Nicolas Landau, Talleyrand and Ribolzi. In 2011, she was responsible for the sale of the famous Fabius Collection comprising more than 300 lots of French 18th- and 19th-century sculpture and paintings. Amongst the most important works sold under her direction is a pair of Italian 16th-century bronzes of Heros riding panthers which were recently exhibited in the Royal Academy in London (£1.6 million). Just recently, she achieved the record price for an 18th-century Florentine pietra dura marquetry panel by Giuseppe Zocchi, at €1.45 million. Ms Goetz has published on medieval art as well as on 18th-century French sculpture, and has written the chapter on Sculpture in the catalogue of the Villa Ephrussi and contributed to the 2007 From Houdon to Rodin exhibition catalogue.