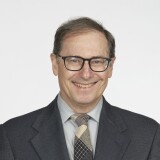 Jonathan Greenberg is Vice President, Senior Specialist in the Valuations department at Sotheby’s and is the liaison in the United States for the Modern and Post-War British Art department, based in London.

After 23 years working in museums and in the New York art market, he joined Sotheby’s in 1999 working in the online Fine Art sales on Sothebys.com. From 2003, he then managed the midseason auctions of Contemporary Art in what was then the Fine Arts department, in addition to being actively involved in that department’s other auctions, especially the Israeli & International Art auctions. In 2013, he joined the Valuations department for the newly-created position of dedicated Fine Arts specialist. This role draws on Jonathan’s broad knowledge of art, spanning many categories and many centuries. Although he initially specialized in the field of Prints, more than 30 years as a dealer and auction cataloguer have given him the generalist’s knowledge that his work at Sotheby’s demands.

In recent years, Jonathan has been actively involved in philanthropic ventures concerned with the arts. In 2006 he was instrumental in organizing a national conference for the Washington DC-based Society of Art and Healthcare (SAH), held at Sotheby’s, New York and sponsored by Vanderbilt University Medical Center, Nashville. He was a speaker at their 2006 and 2007 conferences. He participates in the New York Professional Outreach Program (NYPOP) which brings art students to New York to learn about the professional aspects of making a career as an artist.

Originally from Liverpool, England, Jonathan received his Bachelor of Arts degree with Honours in the History and Theory of Art from the University of Sussex in 1975, his Master of Arts degree in Art History from the University of Massachusetts at Amherst in 1979 and was a member of the International Fine Print Dealers’ Association and the Private Art Dealers’ Association. He has successfully completed the coursework and examination in the Uniform Standards of Professional Appraisal Practice.