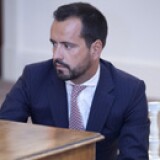 João Magalhães joined Sotheby’s in 2013 and now oversees all French and Continental furniture sold in London. He oversees the Royal & Noble sales and has led a number of successful single-owner sales such as Bernheimer (2015), Vittorio and Caterina Di Capua Collection (2016) and A Venetian Legacy (2017). He has a Masters in Fine and Decorative Arts from Sotheby’s Institute of Arts, where he focused his studies on japanned furniture and material cultural migrations between England and the south of Europe. Prior to joining the company in 2013, he worked as specialist for the international antiques firm Mallett Antiques, both in London and New York. João is also Sotheby’s Representative for Portugal.