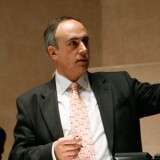 Gregory Rubinstein, Senior Director and Head of the Old Master Drawings Department Worldwide, joined Sotheby’s in 1990 after working at the National Gallery of Art, Washington, D.C., and at the Royal Collection, Windsor Castle.

Mr Rubinstein's particular area of expertise is 17th-century Dutch and Flemish art, on which he has lectured and published extensively. In 2008/9, he co-organised an important monographic exhibition on the paintings, drawings and prints of Jan Lievens, shown in Washington, Milwaukee and Amsterdam. The following year was a keynote speaker at the Getty Museum symposium “Rembrandt and his Pupils: Telling the Difference.”

Mr Rubinstein choreographed the 10-year research programme that led to the reacceptance of Vermeer’s Young Woman Seated at the Virginals as an autograph work and the painting’s subsequent sale in London in 2004. More recently, he was responsible for the sale of Raphael’s Head of a Young Apostle from the Devonshire Collection at Chatsworth, which realized £29.7m/$47.9m – the highest price for any drawing ever sold at auction.