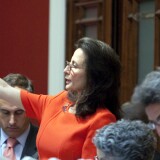 Cristiana Romalli, Senior Director Sotheby’s London, joined Sotheby’s in 1985. In 1984, she contributed to the drawings section of the exhibition catalogue Civiltà del Seicento a Napoli (National Gallery, London, Museo di Capodimonte, Naples). She curated the 1992 exhibition Drawing in Bologna 1550–1600 (Courtauld Institute of Art, London) and contributed to other scholarly publications and several drawings exhibitions. She is currently preparing a book titled Roman Mannerism: Artists active in Rome from 1550–1605, Frescoes, Paintings and related drawings from Pope Giulio III, Ciocchi del Monte, to Pope Clemente VIII, Aldobrandini. She is responsible for the drawings section of Bernardo Cavallino in the forthcoming monograph on the artist to be published in 2013. Most recently, she curated the Drawings section of the exhibition Napoli: Ritorno al barocco. Da Caravaggio a Vanvitelli (1606–1750) at the Museo di Capodimonte, Naples.

At Sotheby’s, she has worldwide responsibility for all Italian drawings and has organised a large number of major sales, beginning with the 1986 sale in New York of the Gaines Collection and the 1989 London sale of Sir Timothy Clifford's Collection and the Drawings by Taddeo and Federico Zuccaro and Other Artists (New York 1990).

She has had numerous opportunities to contribute to scholarship with new discoveries, including drawings by Leonardo da Vinci and Raphael, now respectively in the Metropolitan Museum of Art, New York, and in a Private Collectionin the United States. In 2018, she published a catalogue raisonné on Francesco Solimena’s drawings, as part of a publication curated by Nicola Spinosa on the artist.