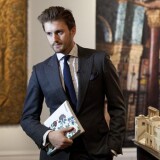 Benedict Carter gained his BA Honours degree in Theology and Religious Studies from Bristol University in 2005, specialising in Islamic studies and Arabic. He achieved an MA with distinction in Near and Middle Eastern Studies from The School of Oriental and African Studies, London, in 2007. Benedict has travelled widely in North Africa, the Middle East, and further afield in the Islamic World, studying Arabic at both the Universities of Jordan and Alexandria. Since joining Sotheby's Middle East Department in 2008, he has specifically been involved in sourcing and selling Islamic works of art in the biannual auctions of Arts of the Islamic World as well as through private sales.