Conjuring a world of pure color, Yves Klein’s incandescent ultramarine pigment – International Klein Blue – forms the cornerstone of the artist’s revolutionary oeuvre. Comprised of layer upon layer of finely applied powder-like pigment, the IKB paintings collectively embody the purest vehicle for Klein’s pursuit of the immaterial. Beautifully textured, exceptionally early and enveloped in the artist’s patented color, Untitled Blue Monochrome (IKB 108) is a truly enchanting and undiluted example of the artist’s formative monochrome corpus. The present work is a compelling testament to the highly conceptual, sternly philosophical, yet deeply spiritual artistic inquiry which drove Klein’s practice as he sought to create the ultimate plastic expression of, as the artist describes, pure “pictorial sensibility” through celestial color alone. (Yves Klein, 'Lecture at the Sorbonne' (1959) in: Klaus Ottmann, tr., Overcoming the Problematics of Art: The Writings of Yves Klein, New York 2007, p. 72) Further distinguished by the fact that the present work was once in the collection of Klein’s friend and fellow artist, Arman, Untitled Blue Monochrome (IKB 108) thwarts dimensional boundaries as though weightlessly hovering in front of us, freely radiating into ambient space.

In the early 1950s, Klein approached the Parisian paint dealer Édouard Adam to develop a blend of chemicals that could adhere pure pigment directly to a board or canvas, having found that traditional fixative and binding mediums dulled the vitality of raw color. This approach resulted in the development of the color that is literally synonymous with Klein – International Klein Blue – which succeeded in preserving the exuberant spectral quality of radiant color. As outlined in his famous 1958 thesis, The Monochrome Adventure, Klein looked to transpose the incandescence of pure pigment onto a classical pictorial format to communicate color as an unrestrained and resonating presence totally liberated from the traditional supremacy of line and form: “What I desired, at the time, was to present, in a perhaps somewhat artificial style, an opening onto the world of presented color, a window opened onto the freedom to become impregnated with the immeasurable state of color in a limitless, infinite manner.” (Yves Klein, 'The Monochrome Adventure' (1958) in: ibid., p. 155) 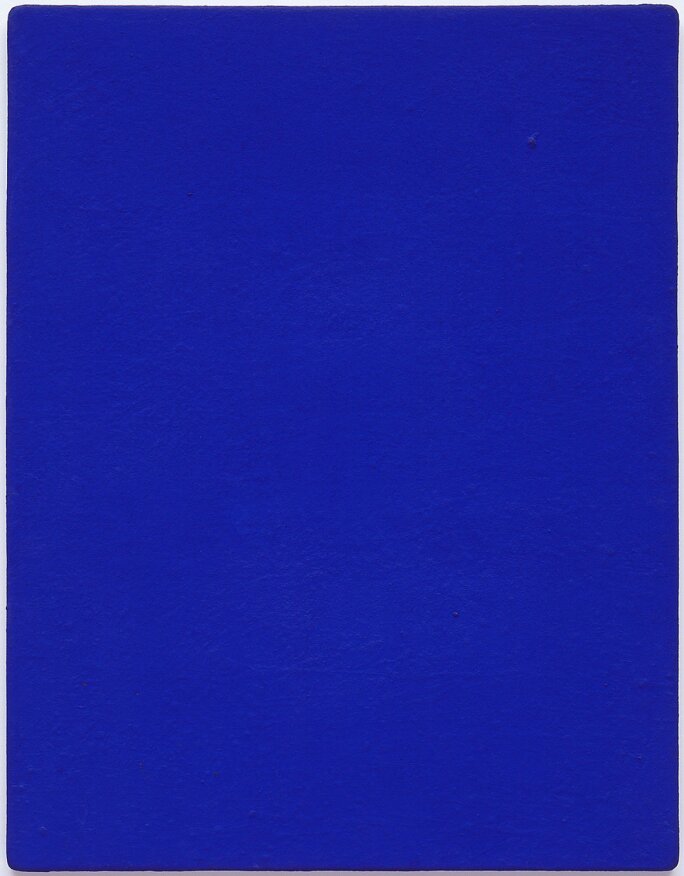 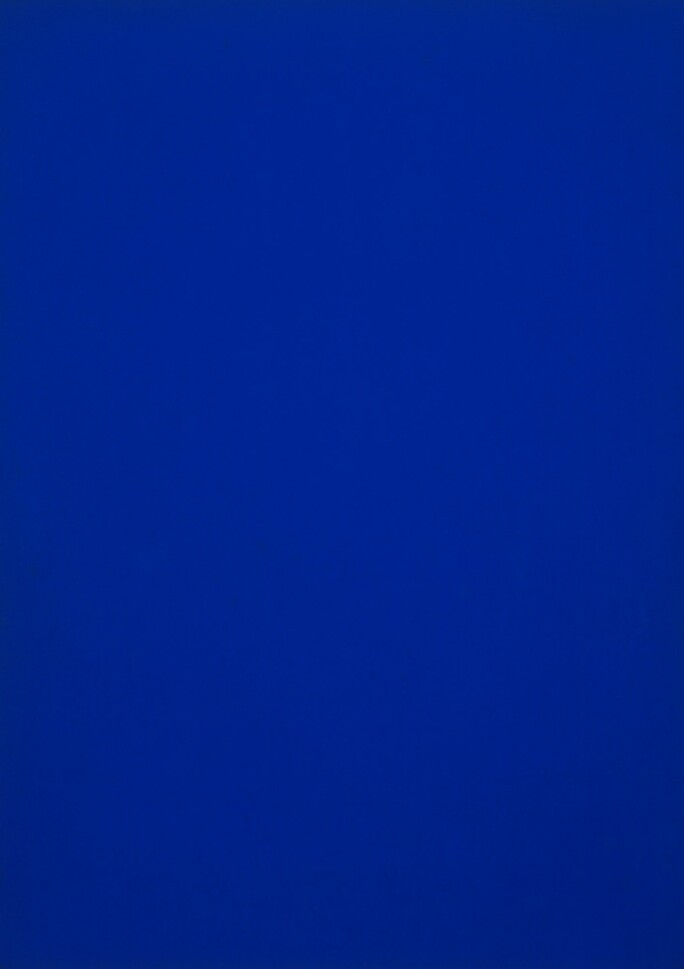 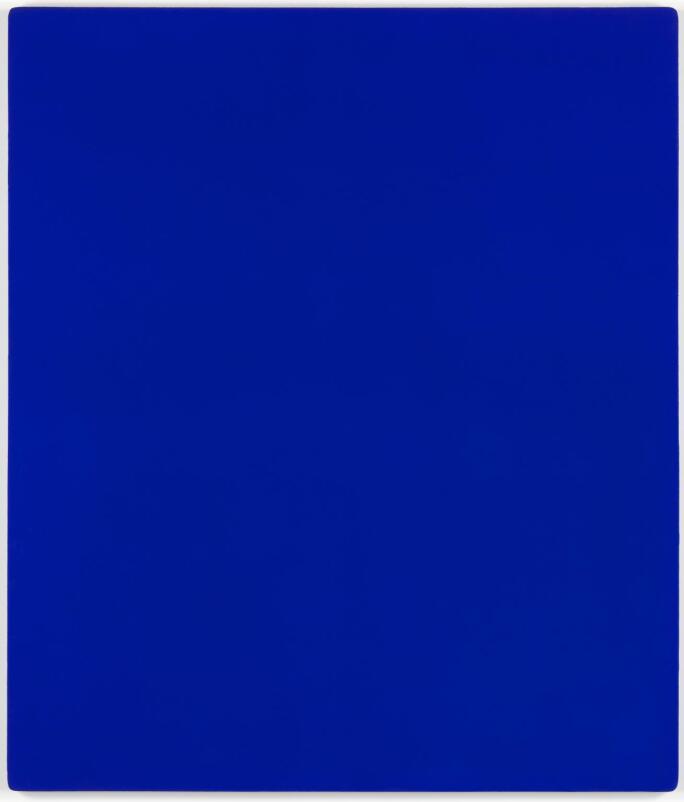 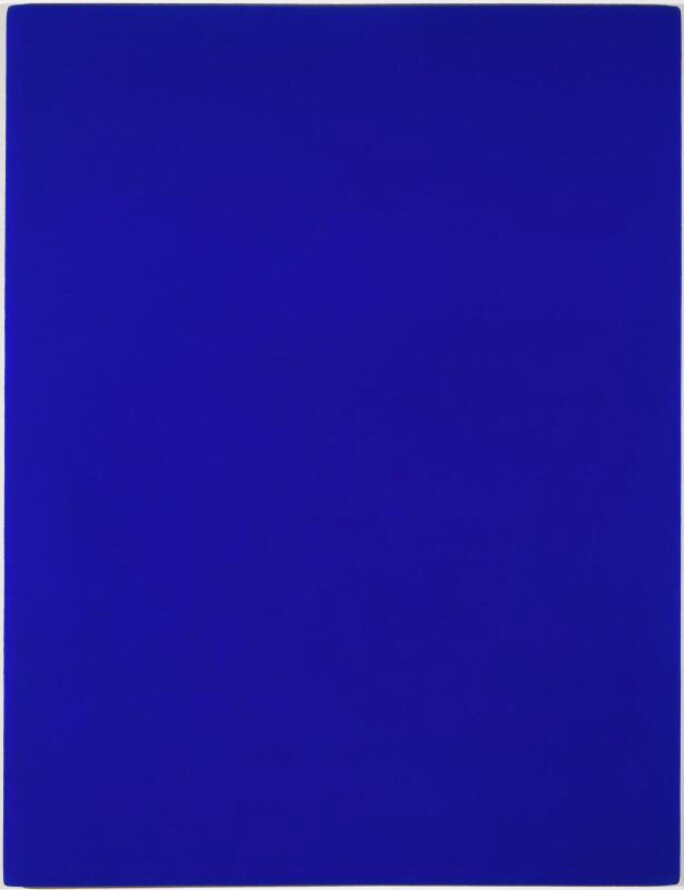 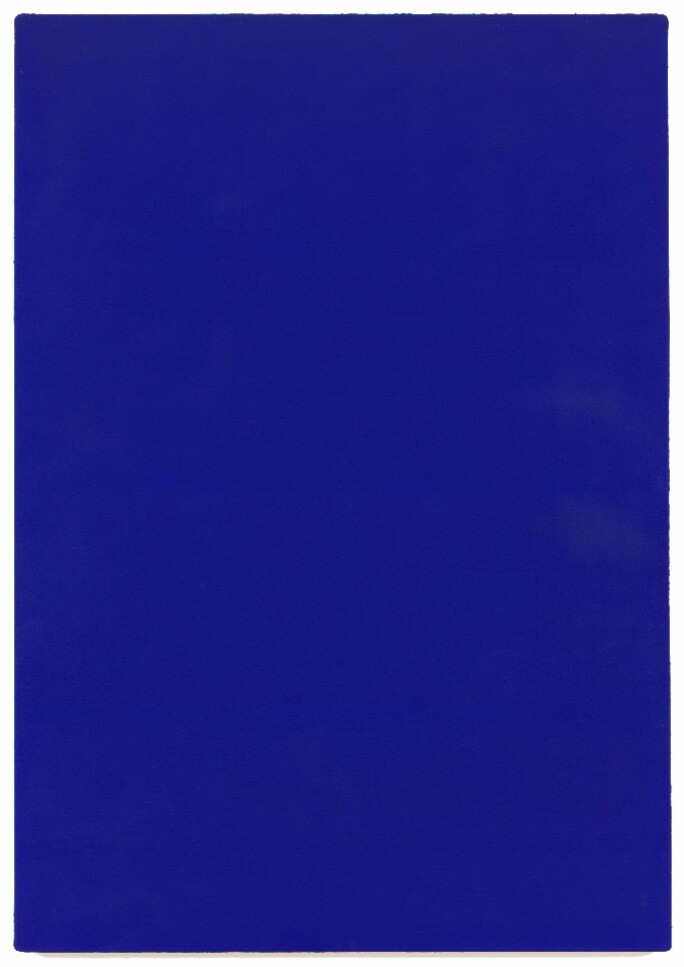 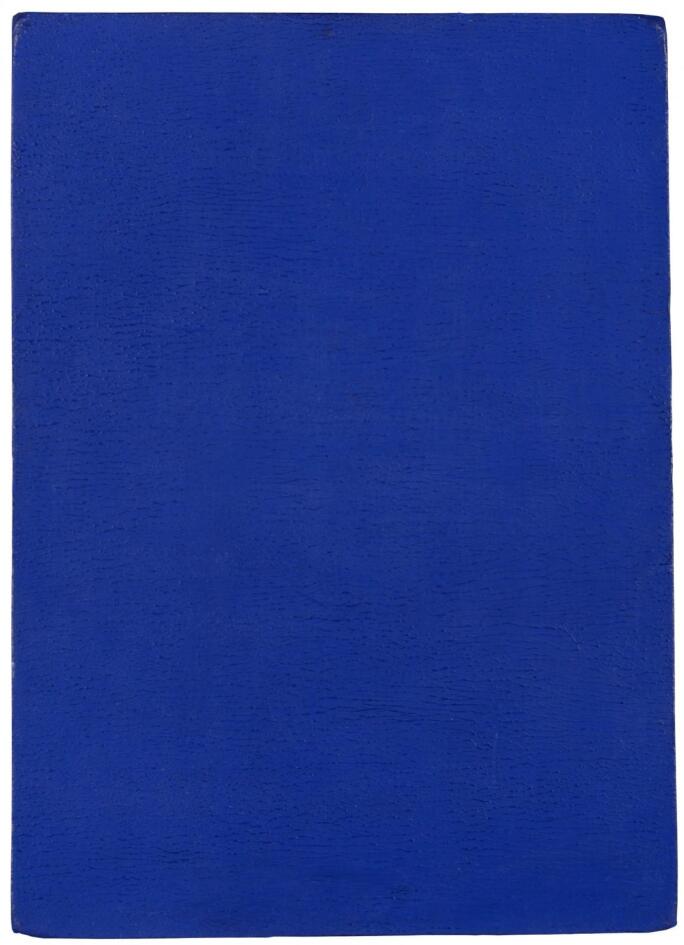 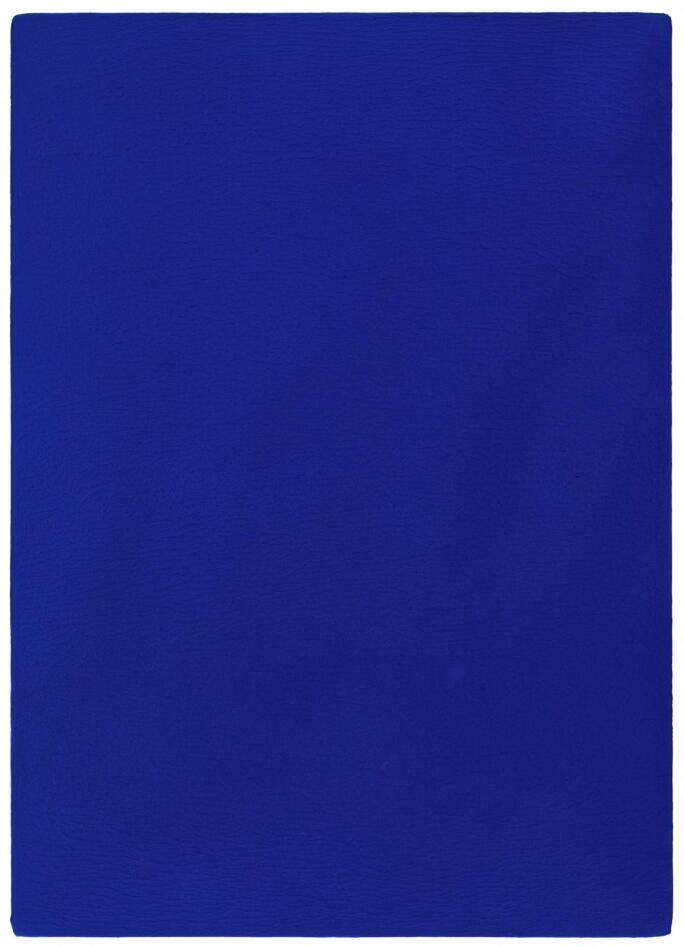 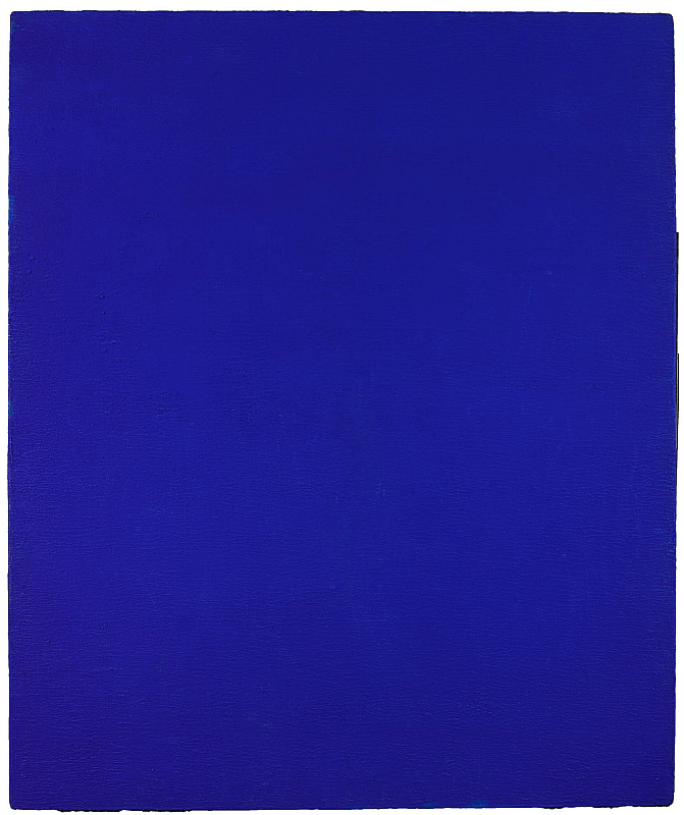 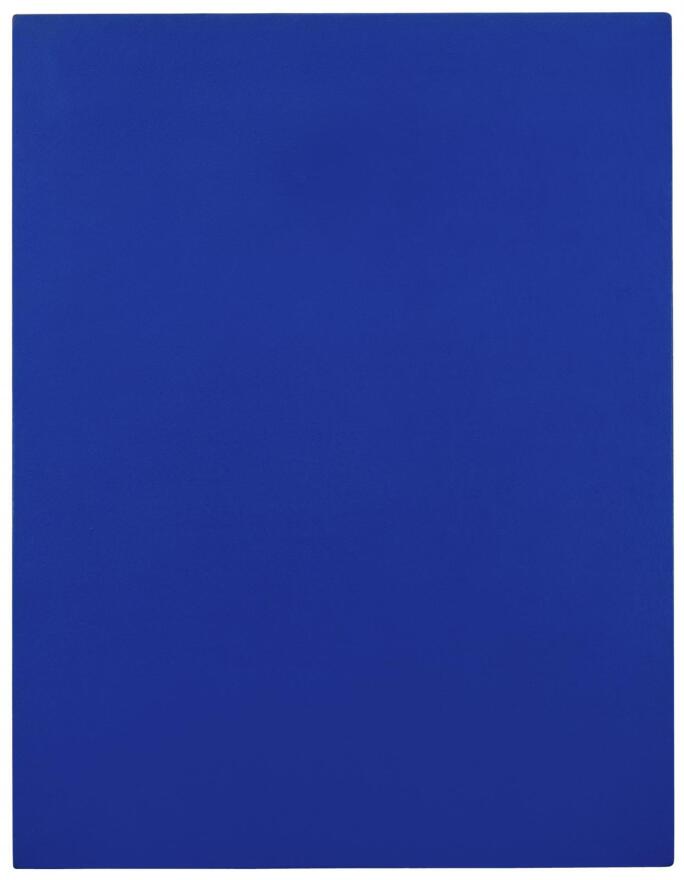 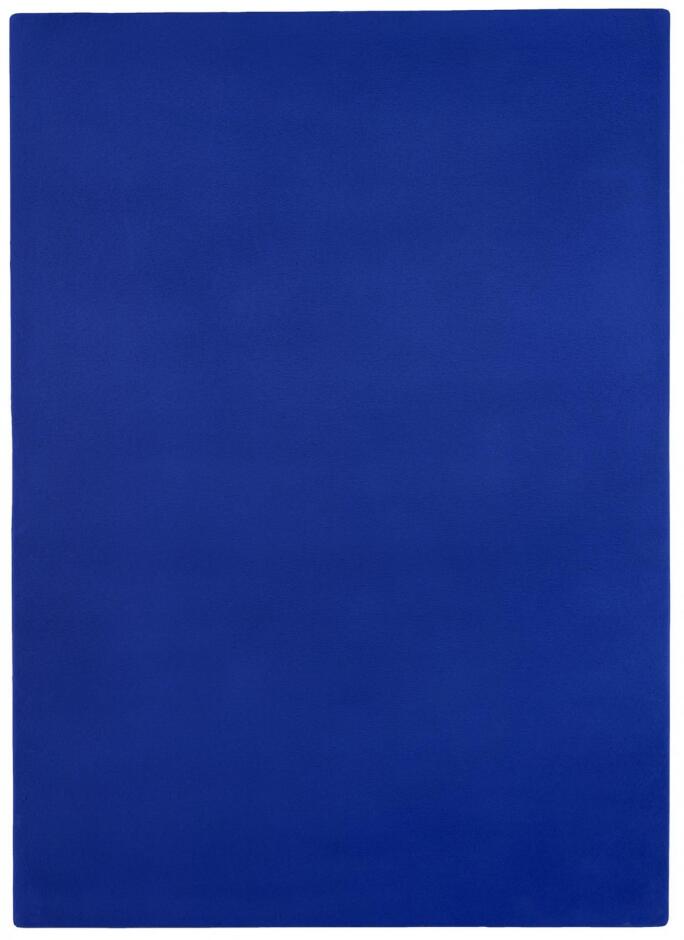 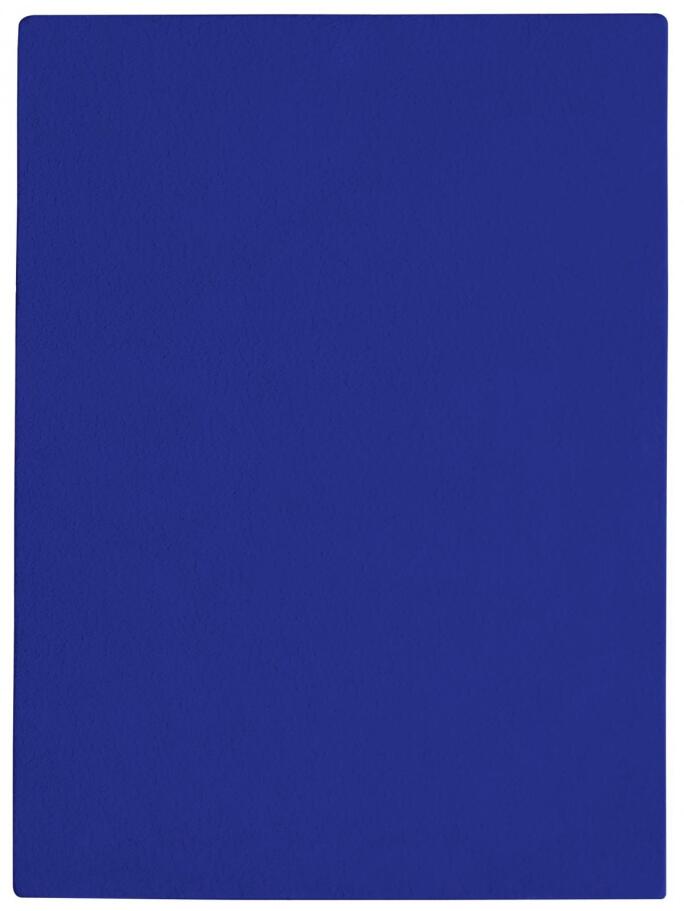 Klein’s Monochromes debuted at Galleria Apollinaire in Milan in January 1957, and subsequently Galerie Iris Clert and Galerie Colette Allendy in Paris later that year. In these exhibitions, eleven IKB monochromes of identical dimensions were installed at the intimate gallery environs in Milan and Paris, hung 20 centimeters away from the wall, as if the concept of the void, an idea that interested Klein immensely, were encroaching upon the world of the living. Inevitably, the works caused some confusion. Klein had executed monochromatic paintings before, in a wide spectrum of colors, but abandoned this approach after his work was misinterpreted for decorative polychromy. By executing all his works in a single hue, Klein threw down his gauntlet to pictorial sensibility, insisting on the consideration of his paintings as autonomous objects according to their own aesthetic merits. He understood each monochrome to have an individual nuance or sensibility that made it utterly unique: “a pictorial quality… perceptible by something other than its respective material and physical appearance.” (Yves Klein, ‘Lecture at the Sorbonne,’ 1959 in: ibid., p. 72) Indeed, there were several features of the Apollinaire exhibition that foreshadowed Klein’s future reputation as an art-world provocateur – that conquistador of space who jumped off a suburban house for his famous Leap into the Void, and who sold immaterial works for kilograms of gold only to demand that the collectors immediately burn the receipt. For example, while each work was presented in the same manner, with the same dimensions, and the same texture, Klein placed eleven different prices on them. This audacious ploy compelled viewers to examine the works more closely, in bewilderment at what they might be missing, and left critics wondering whether the artist was advancing the limits of the avant-garde or undermining it entirely.

Powerful and immutable, Klein’s Monochromes are the ultimate articulation of his oeuvre; they have served as creative stimulus to countless artists and, even today, their brilliant presence, rippling with miniature waves of beguiling blue, cannot be overlooked. Lucio Fontana bought one of the monochromes from the Apollinaire show, and subsequently moved his own work further and further into monochromy, while Piero Manzoni, upon seeing Klein’s monochromes, promptly rejected his previously held semi-figurative style and began to make his Achromes – now a fêted series in their own right. Provoking ruminations on the power and essence of color, our capacities for perceiving it, and an artwork’s ability to embody it, Klein’s IKB Monochromes pose deep phenomenological and ontological questions whilst toying with notions of the sublime. Testament to this, Klein quoted the influential philosopher Gaston Bachelard’s poetic 1943 text, Air and Dreams, as a vital adjunct to his Monochrome Adventure: “There is an imaginary beyond, a pure beyond, one without a within. First there is nothing, then there is a deep nothing, then there is a blue depth.” (Gaston Bachelard, Air and Dreams, quoted by Yves Klein in: ibid., p. 159) Color of the infinite sky, the depthless ocean and the true color of fire, blue is the ultimate spectral shade of the elemental, a supreme portal for Klein’s pursuit of the spiritual absolute. 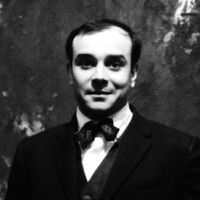 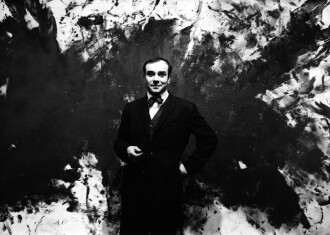