Collected over a generation, this splendid collection of watches pay tribute to the art of the pocket watch. A result of extensive research, discussion and auction battles, the criteria applied to selecting these watches was second to none. An incredibly rare Vacheron Constantin with Westminster chimes and hunting case is the most contemporary watch, and the collection is lead by two incredibly rare Indian market watches in exceptional original condition. Sotheby’s is delighted to present this collection to the market today. 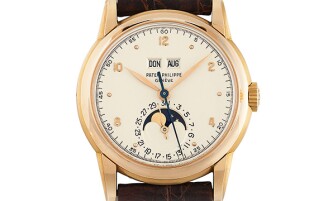 Past Auction
Important Watches
12 May 2019 | 10:30 AM CEST | Geneva
Stay informed with Sotheby’s top stories, videos & news.
Receive the best from Sotheby’s delivered to your inbox.