23 June 2021 • 2:00 PM BST • London
Join Artistic Director of the Serpentine Galleries Hans Ulrich Obrist in conversation with Philanthropist and Creative Director of Lopud 1483 Francesca Thyssen-Bornemisza, Artist Olafur Eliasson and President and CEO of World Monuments Fund Bénédicte de Montlaur, highlighting the critical work of rejuvenating neglected heritage sites, pegged to the revival of the magical 15th-century Franciscan monastery Lopud 1483, on the island of Lopud, off the coast of Dubrovnik in Croatia. The panel will not only celebrate the wonderful efforts to breathe new life into the monastery, but they’ll explore the importance of the site’s new function as a place where art, history and botanical exploration come together. 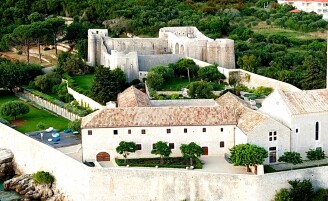 Francesca Thyssen-Bornemisza founded the ARCH foundation (Art Restoration for Cultural Heritage) in 1990, which adopted conservation projects around the world, inspired by the World Monuments Fund (WMF). Shortly after the siege of Dubrovnik in 1992, the foundation set up a restoration studio in the Franciscan monastery there, restoring 12 Renaissance masterpieces from the churches in Dubrovnik over a period of ten years. Through her friendship with the monks on the Franciscan order in Dubrovnik, she was introduced to Lopud 1483.

Today, Thyssen-Bornemisza is the Founder and Chair of Thyssen-Bornemisza Art Contemporary (TBA21), founded in 2002 and based in Madrid. Thyssen Bornemisza is an activist, philanthropist, and patron of the arts. Driven by a belief in the power of art to serve as an agent of change, Thyssen-Bornemisza has supported artists throughout her career in the production and creation of new work that fuels engagement with the most pressing issues of our times. TBA21 will celebrate 20 years of its achievements in 2022. In 2011, Thyssen Bornemisza co-founded TBA21–Academy with Director Markus Reymann, which convenes artists, scientists, policymakers and local leadership in sustained cross-disciplinary explorations to catalyze oceanic research and advocacy through the lens of art.

Thyssen-Bornemisza has received numerous honors, including the Simmons Award for Philanthropic Excellence in 2015, the Merit Award in Gold of the Province of Vienna for her cultural engagement in Vienna in 2009, the Iceland’s Order of the Falcon in 2007 and the Montblanc de la Culture Arts Patronage Award in 1996.

Visual artist Olafur Eliasson (b.1967) grew up in Iceland and Denmark. In 1995, he founded Studio Olafur Eliasson in Berlin, which today comprises a team of craftsmen, architects, archivists, researchers, administrators, cooks, art historians, and specialised technicians. Natural phenomena—such as water, light, ice, fog, and reflections—feature prominently in Eliasson’s often-large-scale artworks. Olafur Eliasson’s art is driven by his interests in perception movement embodied experience and feelings of self. He strives to make the concerns of art relevant to society at large. Art for him is a crucial means for turning thinking into doing in the world. Eliasson’s works span sculpture painting photography film and installation. Not limited to the confines of the museum and gallery his practice engages the broader public sphere through architectural projects interventions in civic space arts education policy-making and issues of sustainability and the climate crisis.

He is internationally renowned for works like The weather project (2003), an indoor sun shrouded in mist installed in the Turbine Hall at Tate Modern, London and seen by more than two million people, and his public art project The New York City Waterfalls (2008), a commission by the Public Art Fund with the support of former mayor Michael Bloomberg for which he installed four artificial waterfalls along Manhattan and Brooklyn shorelines in New York. Another acclaimed project in public space is Ice Watch, a public installation for which Eliasson and geologist Minik Rosing transported 12 massive blocks of glacial ice from Greenland to Copenhagen’s City Hall Square (2014) to coincide with the Fifth Assessment Report of the UN Intergovernmental Panel on Climate Change. The project was reiterated in Paris (2015) and London (2018).

In 2012, he founded the social business, Little Sun, and in 2014, he and Sebastian Behmann founded Studio Other Spaces, an office for art and architecture.

Bénédicte de Montlaur is President and CEO of World Monuments Fund (WMF), the world’s foremost private organization dedicated to saving extraordinary places while empowering the communities around them. She is responsible for defining WMF’s strategic vision, currently implementing that vision in more than 30 countries around the world, and leading a team that spans the globe. Her background mixes culture and the arts, politics, international diplomacy, and human rights. Prior to joining WMF, Montlaur spent two decades working across three continents as a senior diplomat at the French Ministry of Foreign Affairs.

Hans Ulrich Obrist is a Swiss curator, critic and art historian and Artistic Director of the Serpentine Galleries in London, a position he has held since 2005. He has presided over 300 exhibitions, including projects at the Venice Biennale, Manifesta and the celebrated Serpentine Summer Pavilion Commission, which will be undertaken in 2021 by Johannesberg-based architectural practice, Counterspace.

Obrist has worked alongside some of the art world's most influential figures such as Alighiero Boetti, Marina Abramovic, Gustav Metzger and Philippe Parreno, on exhibitions, curatorial projects, biennales and major museum retrospectives.