A week of James Bond sales – of rare books, film posters, watches and a certain Aston Martin – highlights a captivating story that ties together the world’s most famous secret agent and its most prestigious street. The art world, it appears, has always been in 007’s sights. By Christian House.

The Best of Bond on Bond Street

O n a hot June day in 1963 James Bond walked into Sotheby’s on New Bond Street with more on his mind than art. Bond – ruthless agent, incorrigible lover and diligent martini drinker – could fit in anywhere, and in Ian Fleming’s short story The Property of a Lady, which was written specially for the auction house, he slotted into the art world like a canvas into a frame.

In The Property of a Lady, Bond approaches the auction room like it is a gaming table or a firing range. Bond ascends “the broad stairs with the fashionable, excited crowd and along a gallery and into the main auction room that was already thronged… the lofty room was perhaps as large as a tennis court. It had the look and the smell of age.” He is there to flush out a top Soviet agent during the auction of a Fabergé masterpiece. The story finds Fleming on delicious form. "Bond turned to his catalogue. There it was, in heavy type and prose as stickily luscious as a butterscotch sundae: The Terrestrial Globe, designed in 1917 by Carl Fabergé."

Bond’s sojourn at Sotheby’s came about through an appropriately intriguing web of society and Intelligence contacts. Ian Fleming and his wife Ann were friends of Sir Isaiah and Lady Aline Berlin. Aline's son from her previous marriage was Michel Strauss, an entrepreneurial young specialist at Sotheby's during the 1960s who set up the company’s Impressionist and Modern Art department in London alongside Bruce Chatwin, who went on to become the celebrated author of In Patagonia. Using the family connection, Strauss asked Fleming if he would contribute a story to the 1963 edition of Sotheby's yearbook, The Ivory Hammer.

But Sotheby’s was already on Fleming’s radar. During the Second World War, the writer had served in British Intelligence alongside the house’s enigmatic chairman Peter Wilson. In Property of a Lady, Bond encounters Wilson on the rostrum: “All eyes were focused on the slim, good looking auctioneer talking quietly from the raised wooden pulpit. He was dressed in an immaculate dinner jacket with a red carnation.”

Peter Wilson was the architect of the modern gala auction event. In the late 1950s he had masterminded the company's expansion and with the Goldschmidt sale in 1958 – a glorious group of works by Van Gogh, Renoir, Cezanne and others – and singlehandedly invented a way of buying art that put buyers in black ties and TV cameras in the room.

"Fleming and his wife were well connected in the art world... Among their friends were Francis Bacon, Cecil Beaton and Lucian Freud, who painted Ann's portrait.”

Wilson was a chameleon, a mercurial character who possessed many of Bond’s qualities and is rumoured to be one of Fleming’s inspirations for the character. Both figures, real and fictional, relied on secrecy and could gather information whilst appearing nonchalant. A colleague from the 1960s once remarked that if Peter Wilson was spotted swimming in the Mediterranean you could be sure that someone in the water nearby had a major art collection.

In the early 1980s, Fleming’s short story was adapted for the screen for a scene in Octopussy (1983). That scene – in which rows of dealers and collectors are seated under a sea of jellyfish-like chandeliers – made an indelible impression on a teenager called Claude Piening, a lifelong Bond fan and now Sotheby’s Head of 19th Century European Paintings. “Octopussy is the Bond film most steeped in the art world,” Piening observes. “And it’s the one which first put Sotheby's, and my future career, on the map for me. Just as fun as the auction shots are the ones of Roger Moore emerging on to Bond Street.

The view is much unchanged today, save for the disappearance of the newsagent that occupied what is now the main entrance. Back then, the public entered through the door to the left, now our front window, to go straight upstairs into the galleries.” Roger Moore brought a touch of humour – and considerable eye-brow acting – to Bond’s flirtation with Sotheby’s. “Now there is a lady,” Moore observes as a glamorous buyer glides through the crowded gallery. “James,” his colleague groans. “Stick to the business in hand.”

The ties between Bond Street and 007 are as intricate as a Spectre plot. They can be traced back to the late 17th century, long before Fleming created the character. Work began on constructing the famous Mayfair thoroughfare in 1686, named after its developer Sir Thomas Bond, owner – and demolisher – of Clarendon House on Piccadilly and bearer of the rather catchy family motto Orbis non sufficit (The world is not enough). It would later serve as James Bond’s family motto in On Her Majesty’s Secret Service and would become the title of the 19th Bond film.

The relationship between Bond and art is an intriguing one, says the novelist and art collector William Boyd. In 2013, Boyd published Solo, a new Sixties-set Bond novel authorised by the Fleming estate. Bond, he maintains, is a perfect fit in the gladiatorial arena of the fine art auction. “I think he’d be a very good and competitive bidder. His competitive poker-playing instinct would come to the fore. Also, he’s a very accomplished Bridge player (see the epic game in Moonraker). And you “bid” in Bridge, don’t you? I suspect Bond would be able to cast a shrewd spy’s eye on fellow bidders, suss out who’s bluffing, who’s terrified, who’s determined. Might be very useful in an auction room.”

We already know that the art and Intelligence spheres intersected. Perhaps the greatest double agent in British history was Anthony Blunt, the Surveyor of the Queen’s Pictures and, it emerged, a steadfast Soviet spook. In the Bond/Fleming collection at Sotheby’s these fields mix like chips on the baize: there are notes sent to his friends in MI5 alongside watercolour sketches for his book covers.

“Fleming and his wife were themselves aesthetes and well connected in the art world,” Piening observes. “Among their friends were Francis Bacon, Cecil Beaton and Lucian Freud, who painted Ann's portrait.” Beaton, whose studio archive is owned by Sotheby’s, snapped the author surrounded by palm fronds at Goldeneye, the author’s Jamaican hideaway.

London, however, was more like a library for Fleming – and Bond. “He was definitely more of a reader; Fleming describes his flat as book-lined,” William Boyd notes, adding that “in Solo, where I describe his flat, I have given him some routine paintings and prints on the walls.” Boyd recently revealed the precise location of Bond’s apartment in Wellington Square in Chelsea. “It is strange how in the case of some fictional characters a kind of reality begins to take over their lives, as if they really did live and breathe, had an actual address and a mortgage.”

Bond might be a bookworm in the novels but in the film franchise paintings have played their part from the start. As Claude Piening explains: “In Dr No, the the very first Bond movie, the eponymous villain's underwater lair at Crab Key in Jamaica provides the setting for an unexpected encounter, lost on today's audiences but which would have aroused gasps in British cinemas in 1962. Walking though the dining room, Sean Connery, as Bond, does a double take as he passes a portrait on an easel. It is Francisco Goya's The Duke of Wellington. The painting made headlines when, the year before, it was stolen from the National Gallery in a Thomas Crown-style heist.”

That passing glimpse set the tone for the films that followed: Karl Stromberg, the villain of The Spy Who Loved Me, pinched Botticelli’s Venus; more recently, in Skyfall (2012), Q and Bond meet in the National Gallery, where the pair consider the elegiac power of Turner’s masterpiece, The Fighting Temeraire.

Fleming certainly understood the currency of a commanding image. He corresponded regularly with Dickie Chopping, the artist who would bring a florid seediness to the Bond dustjackets. Writing to Chopping – who he nicknamed “The Executioner” – Fleming suggested “one of those frilly heart shaped Valentines with a dagger thrust though it” for the cover of From Russia With Love. The film posters and promotional artwork offered in the Bond on Bond Street sales tracks the character’s image around the world. French artists sketched him as a bourgeoise-but-deadly gent en vacances; Italian designers focused on his amorous antics; the Germans gave him the noir treatment; and there are a lot of knives in the Japanese posters.

Over the years, Bond has made quite an impression at Sotheby’s: last year saw a collection of lava-hot love letters from Ian Fleming to his wife stunned bibliophiles, while the “the most famous car in the world”, Bond’s 1965 Aston Martin DB5, sold for $6.38 million.

In The Property of a Lady, Bond gets his man like those collectors got their lots. The Soviet spy is finally spotted, taking off his dark glasses in a covert end to his bidding on the Fabergé globe. He is heavy-set, with pinched ears and “the sort of face that might belong to a bank manager”. Bond “smiled with grim satisfaction” as the gavel went down like the snap of a pistol. 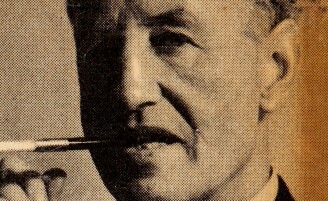 Past Auction
James Bond: A Collection of Books and Manuscripts, The Property of a Gentleman
28 October–11 November 2020 | 3:00 PM GMT | London 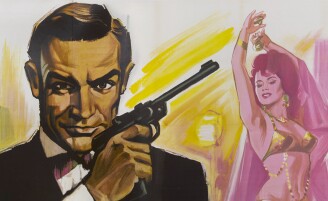 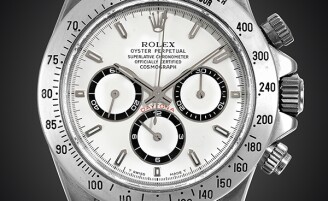