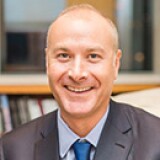 
D avid Schrader joined Sotheby’s in February 2017 as Head of Private Sales for Contemporary Art, New York after nearly two decades on Wall Street, most recently as a Managing Director at JP Morgan, where he dealt with some of the world’s largest financial institutions. During that time, he also established himself as a respected collector of Post-War and Contemporary Art. In his role, Mr. Schrader works with Sotheby’s global Contemporary Art team, bringing his perspective and acumen as a sophisticated collector.

Mr. Schrader began his career on Wall Street at Bear Stearns in the late 1990s and bought his first work of art around that same time. His professional path took him to Credit Suisse before JP Morgan, where he spent the last five years. Mr. Schrader’s interest in collecting grew as he built a successful career in finance, and his market intelligence is particularly deep in regards to Contemporary artists including Josef Albers, Mark Grotjahn, Yayoi Kusama, Sol Lewitt, Gerhard Richter, Ed Ruscha, Rudolf Stingel, Andy Warhol and Christopher Wool, among others.