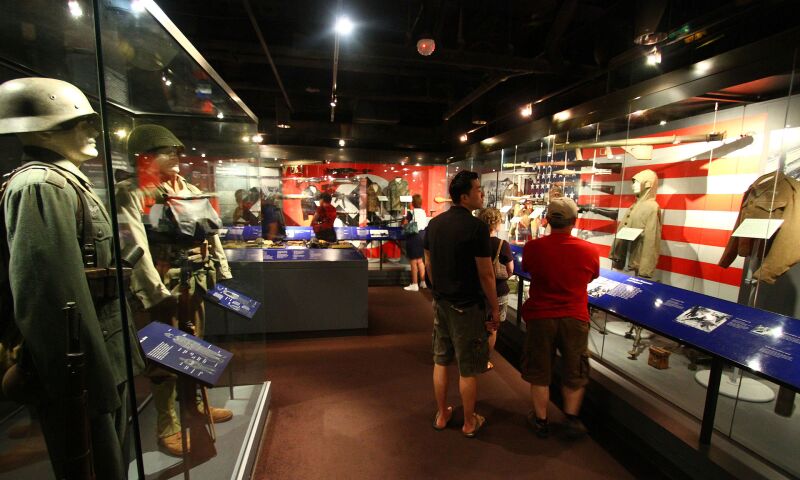 The National WWII Museum, designated “America’s National WWII Museum” by Congress in 2003, takes visitors on an immersive tour of the Second World War. The Museum’s collection includes over 250,000 artifacts and 9,000 oral history interviews conducted with veterans from all branches of the service and all fronts. Immersive, multimedia exhibits draw heavily upon personal accounts of the War to place visitors in the shoes of the American men and women who served and feature period newsreels, interactive kiosks, and video oral histories displayed in recreated battle settings and villages.

The Museum’s six-acre campus contains buildings arranged around central themes of the war, a multimedia 4-D theater, and two restaurants. Noteworthy permanent exhibitions include a D-Day exhibit that dates to the Museum’s original incarnation as the National D-Day Museum in 2000; displays of WWII planes, tanks, and watercraft; a STEM Innovation Gallery, which highlights the role of science, technology, engineering, and math in Allied victory; and the “Road to Berlin” and “Road to Tokyo” exhibits, which offer servicemembers’ perspectives on the European and Pacific theaters of war. Additional museum buildings are under construction, including a hotel and conference center; Liberation Pavilion, which will explore the final months of the War, and the Hall of Democracy, an outreach and education center that will house the Institute for the Study of War and Democracy as well as a research library.

The Museum also sponsors numerous programs for community members that are designed to keep memories of WWII alive, from lectures by renowned scholars to summer camps.