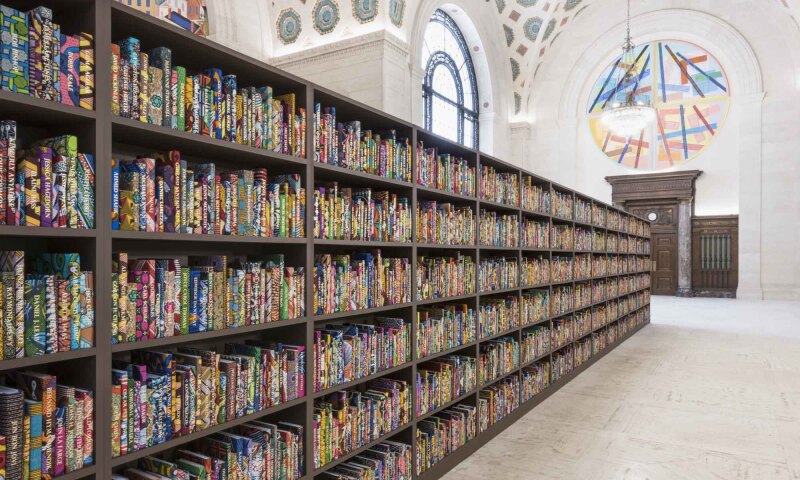 The American Library by Yinka Shonibare CBE is a celebration of the diversity of the American population and acts as an instigator of discovery and debate. The six thousand books in this art installation are covered in the artist’s signature Dutch wax printed cotton textile. These fabrics were originally based on Indonesian batik textiles, made in the Netherlands and sold in West Africa. Since the 1960s this fabric has been celebrated as a symbol of African identity. The mixed origins of the fabric make it a perfect metaphor for the multicultural identity embedded in the history of the United States.

On the spines of many of these books are, printed in gold, the names of people who immigrated, or whose antecedents immigrated to the United States. On other books are the names of African Americans who relocated or whose parents relocated out of the American South during the Great Migration. These names include W. E. B. Du Bois, Maria Goeppert Mayer, Steve Jobs, Bruce Lee, Ana Mendieta, Joni Mitchell, Toni Morrison, Barack Obama, Steven Spielberg, Carl Stokes, Donald Trump and Tiger Woods. These people have all made a significant contribution to aspects of American life and culture and represent every field from science to activism, music, philosophy, art, and literature. Most of these people have also experienced varying degrees of discrimination and hardship during and after their or their family’s relocation. A further set of books within the library features the names of people who have spoken out against immigration, equality or diversity in America.