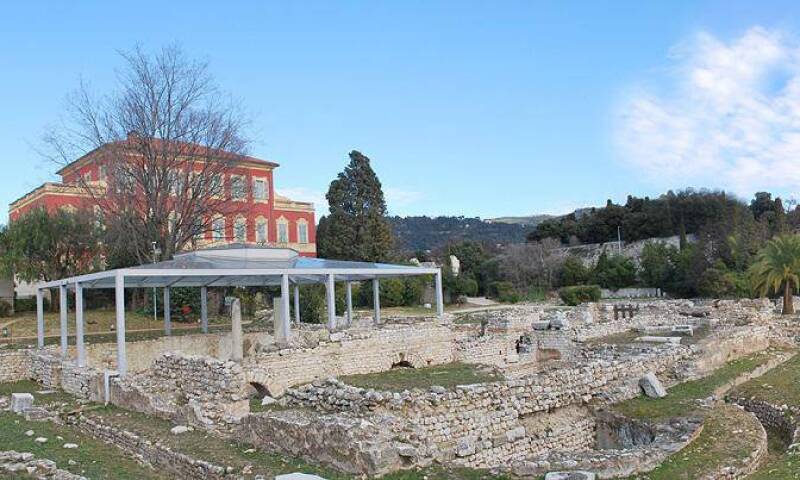 The museum, inaugurated in January 1989, succeeds the first site museum created in 1960 in the villa of the Arena, current museum Matisse. The collections concern the ages of metals, antiquity and develop until the early Middle Ages. They concern the life of Cemenelum and the province of the Alpes Maritimae , through the many objects and official or private documents discovered during the archaeological excavations from 1950 to 1969 in the site acquired by the municipality of Nice, but also beyond.

The site of the ancient city of Cemenelum , capital of the province of the Maritimae Alps , after the end of the conquest of the Alps by Augustus and the organization of the Ligurian territory, presents, the amphitheater, three complete thermal complexes, streets, a sewer system, schola , domus and shops. Majority of the third century, these vestiges involve in fact different eras of construction from the 1st to the 7th century. A first century wall limits the baths of the north. This northern thermal complex presents a cold room, frigidarium having maintained an elevation of more than 10 meters. Equipped with a basin, it is in communication with the heated rooms, the tepidarium(warm room), the sudatorium (oven) and the two caldaria (warm rooms).

Outside, the sports ground, the swimming pool and the building of the adjoining rooms with the latrines (collective toilets), allow to have an idea of the way in which the Romans used the baths and the importance of this practice in the society. The technical aspects of these buildings, including the heating system, are visible in the eastern thermal baths. The thermal complex of the west, rebuilt late fourth-early fifth century, houses the remains of a church and baptistery paleochristian manifestations of urban life in the early Middle Ages and until the seventh century. Models of these buildings are presented in the museum.