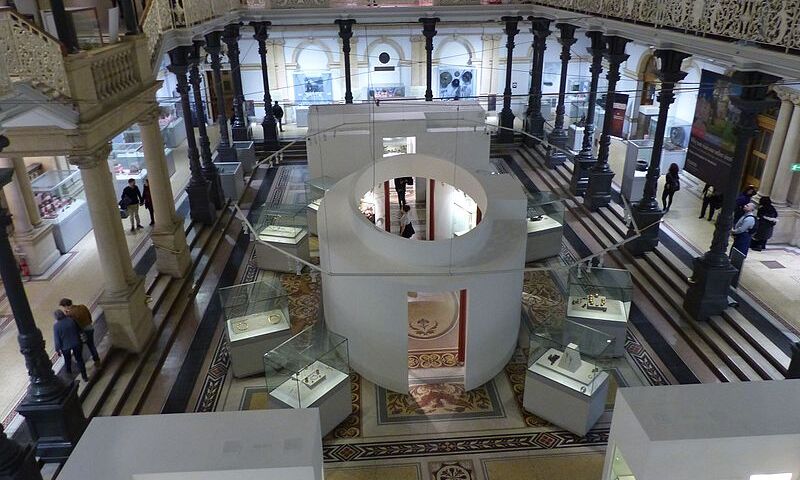 The National Museum of Ireland is the leading museum institution in Ireland. Its collections span millenia of human history as well as natural history. The Museum was founded by an act of Parliament on August 14, 1877 as the Dublin Museum of Science and Art. It originally housed the collection of the Royal Dublin Society, whose own museum was dedicated to natural history, and was enhanced by the acquisition of collections from other important Irish cultural institutions, such as the Royal Irish Academy and Trinity College Dublin. Its name was changed to “National Museum of Science and Art” in 1908 and again to “National Museum of Ireland” in 1921, the name it holds today.

The Museum has three branches in Dublin and a fourth branch in County Mayo, located approximately 3.5 hours from the capital. The Kildare Street branch houses the Museum’s archaeological collections and displays artifacts from prehistoric Ireland through the medieval period. The Decorative Arts and History branch is located in the Collins Barracks, a former military barracks that dates to 1704, and utilizes cutting-edge display methods to showcase Ireland’s rich tradition of decorative arts as well as the nation’s political, economic, social, and military history. The Collins Barracks branch is also home to the museum’s administrative center. The collections of the Natural History Museum, located on Merrion Street, comprise nearly two million specimens, many gathered by Irish scientists and amateurs during the height of the British Empire in the 19th century. The National Museum also oversees the Country Life museum in Turlough Park, County Mayo, a Venetian Gothic building and gardens dedicated to the display of daily Irish rural life and crafts from the Great Famine of the mid-19th century through the mid-20th century.

Each branch of the museum offers a variety of educational activities for families with children, including seasonal crafts, self-guided activity booklets, and interactive exhibits. Museum cafes at each location offer locally-sourced Irish food and fair trade tea and coffee.