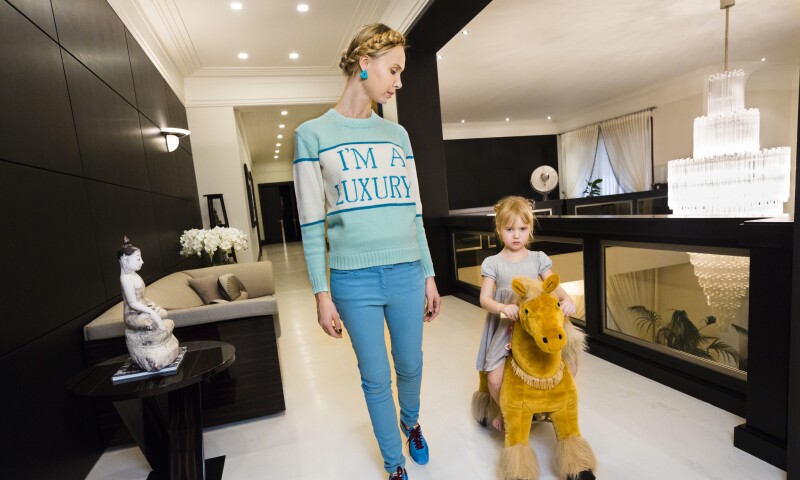 Lauren Greenfield, Ilona at home with her daughter, Michelle, 4, Moscow, 2012.

A visual shell shock: With 'Generation Wealth' Lauren Greenfield has created a unique document of the recent decades' crazed consumerism in a world, which is increasingly obsessed with the dream of looking both beautiful and rich.

The American photographer and documentarist Lauren Greenfield (b. 1966) grew up in the white American middle class characterized by industriousness, education and a certain discretion. With the photographic series Generation Wealth she casts an eye-opening glance on 25 years of consumer culture which in the view of the artist has changed the values of the middle class to raw materialism, celebrity culture and undisguised narcissism.

The exhibition is not about the super-rich one percent of the population or about the financial world; it is rather, in Greenfield’s own words, about how the body, youth, sexuality and ‘looking rich’ have become the values of our time. Exposing the system behind this version of capitalism is the true mission of the exhibition. Greenfield depicts not only the winners, but also those who go to the wall in the face of the grotesque spirit of competition.

With the tools of the documentarist – images and interviews – this investigation becomes a piece of visual culture from a period of unprecedented consumerism. Greenfield was earlier preoccupied with the commercial mechanisms that trap teenagers just as they are emerging as consumers. And although knowledge of this tendency is not new to sociologists and economists, in the hands of Greenfield it is suddenly made visible to us – as visual shell shock. This exhibition takes us on a mad race all over the world: to Iceland, Dubai, Ireland, Russia and the USA.