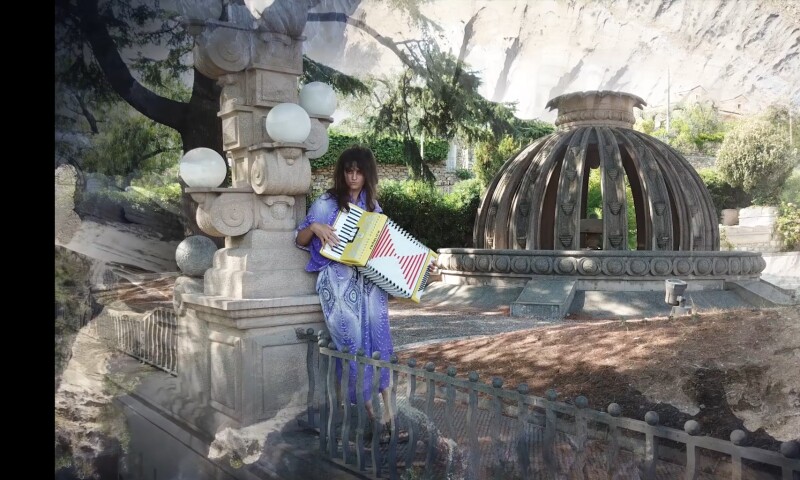 In “A Woman’s Sports Car”, which Raphaela Vogel (born 1988 in Nuremberg) created for her exhibition at Haus der Kunst, the artist places viewers in a spectacular but unstable setting. A dual-channel projection beams from the headlights of a rotating, canary-yellow sports car, a 1981 Spitfire Triumph. The cones of light form a pair of eyes that offer a glance into a spherical world distorted by a 360-degree optic. As if thrown into a childhood dream, it remains unclear whether it is the steps of the young woman with her animal companion, a poodle, that makes the globe spin, or whether the movement originates in the pneumatic pumping of the protagonist’s accordion. A world in a state of constant wavering, sometimes rocking.

We can be sure, however, that all the old-fashioned fantasies of the virile potency of the sports car in conjunction with the sexual attraction of female form and surface of Raphaela Vogel are thwarted. In her installation, rather, we find ourselves in a landscape in which humans, machines and animals are both fragmented and fused together to form new alliances. Time and again the multimedia artist has addressed gender issues and the socio-political formation process of seeing and being seen. In her videos, Vogel usually assumes every role: she plays the protagonist, directs the eye of the camera, edits the films and produces the soundtracks. She explores defined gender roles in an intuitive and physically engaging way, often interweaving autobiographical elements into her work. Her pictorial worlds, which are at times delicate and ethereally hypnotic, at others screeching and disturbing, lead to an unsettling, techno-animistic feeling of subjectivity.