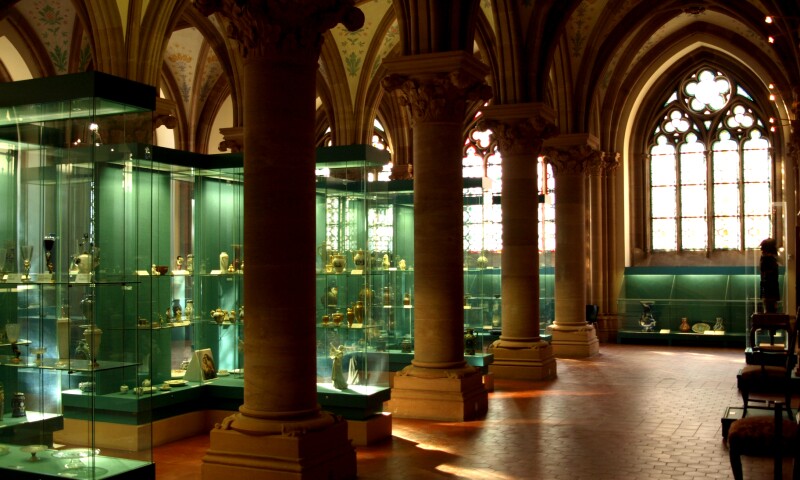 The internationally-renowned Germanisches Nationalmuseum is dedicated to the art and cultures of German-speaking areas—areas in which German was spoken at one time—from prehistory through the present. Its collection holds over 1.3 million objects, 22,000 of which are permanently displayed, and range from Stone Age hand axes to Rembrandt’s self-portrait. Permanent exhibitions cover a number of subjects, including medicine and trades; folk cultures; scientific instruments; German art, style, and design; numismatics; and toys.

The Nationalmuseum was founded in 1852 by Franconian nobleman Hans Freiherr von und zu Afuse to found a “well-ordered general repertory of the entire source material for German history, literature and art.” The museum occupies a unique assemblage of buildings that themselves recount the history of Nuremberg. The Bavarian king presented the Nationalmuseum's founder with a fourteenth century former Carthusian monastery at the southern edge of the old city of Nuremberg in 1857. In the early 20th century and following World War II, additional buildings were constructed. The museum’s entrance is preceded by the Way of Human Rights, a monumental outdoor sculpture by Israeli artist Dani Karavan that both repudiates Nuremberg's Nazi past and serves as a solemn reminder of the human rights violations that continue to occur all over the world.

The National Museum is also home to a research library that holds over 650,000 volumes on European art and cultural history, while its Institute for Art Technology and Conservation conserves the Museum’s collection and provides practical training for professional art restorers.