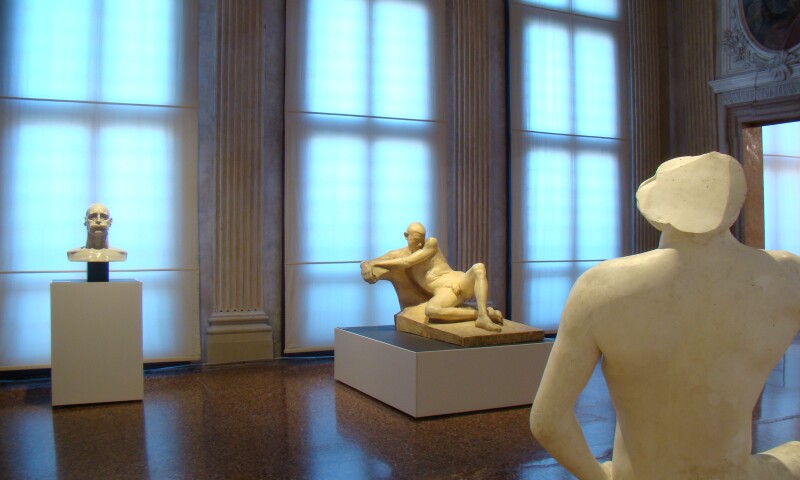 The grandiose palace, now seat of the Galleria Nazionale d’Arte Moderna, was built in the second half of the seventeenth century for the noble and wealthy Pesaro family, a project by the greatest Venetian baroque architect, Baldassarre Longhena, who also designed the church of the Salute and Ca’ Rezzonico. Works began in 1659 starting from the landside; the courtyard, with its striking loggias, was completed by 1676; the splendid facade on the Grand Canal had already reached the second floor by 1679, but, on Longhena’s death in 1682, the palace was still unfinished. The Pesaro family entrusted its completion to Gian Antonio Gaspari who concluded it in 1710, in compliance with the original project.

The collection was enriched over the years by further acquisitions and donations. The former mainly consisted of works bought by the Town Council at the Venice Biennale: up unto the 1950s European Art was favored, in agreement with the Galleria Nazionale d’Arte Moderna of Rome, which generally acquired Italian works at the Biennale. From the 1960s onwards, a new policy was adopted, privileging Italian Art. As a result there was a noticeable increase in the number of works by those artists already mentioned, who, thanks to the Bevilacqua La Masa exhibitions and the polemics that usually surrounded them, made Ca’ Pesaro famous as a driving force for innovation in Italian Art. The collection of works from nineteenth-century Venice is also remarkable. As for the donations, they started with the founding donation by Prince Alberto Giovanelli, followed by Baron Edoardo Franchetti, Baron Ernst Seeger, Filippo Grimani, but above all by Associazione Industriali e Commercianti Veneziani. In 1914 a number of notable works in wax by Medardo Rosso were acquired, and in the 1960s the De Lisi bequest enriched the gallery with works by Morandi, De Chirico, Carrà, Kandinsky, Mirò and Matta, thus filling certain gaps left by the municipal policy of acquisition; finally, in 1990, the gallery received the valuable Wildt donation.