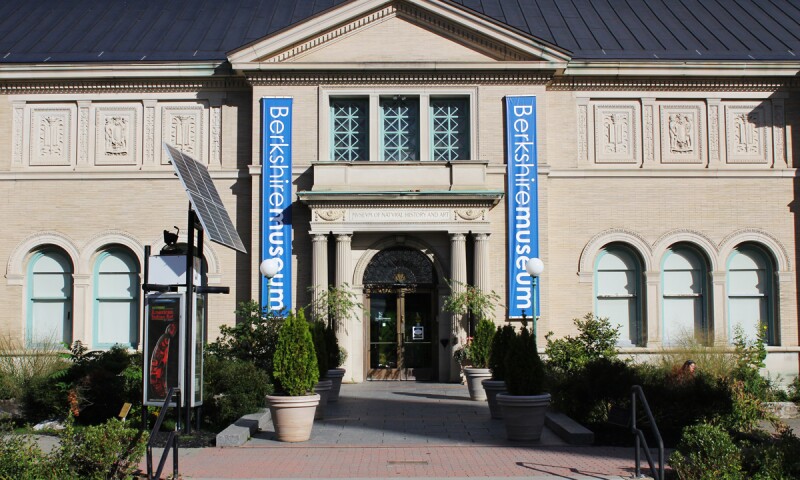 The Berkshire mission is bringing people together for experiences that spark creativity and innovative thinking by making inspiring educational connections among art, history, and natural science.

The founder, Zenas Crane purchased many of Berkshire Museum’s first acquisitions, including a sizable group of paintings from the revered Hudson River School. Significant works by Albert Bierstadt and Frederic Edwin Church were a part of this early collection.

Berkshire Museum is the repository for objects associated with the lives of well-known figures in American history. The first successful expedition to the North Pole by Robert E. Peary and Matthew Henson in 1908 and 1909 was supported by Crane, and Henson’s whole-body fur suit, the sledge that made the trip, and other equipment from the venture found a home at Berkshire Museum. The writing desk of Nathaniel Hawthorne and the musket believed to have belonged to Israel Bissell (a cohort of Paul Revere who made a midnight ride to Philadelphia to warn that “The British are coming!”) also are part of the extensive permanent collection.

Berkshire Museum continues to add to the collections through purchase and gift. In the 21st-century, acquisitions have focused on artists with national and international reputations who have strong connections to the Berkshires: Gregory Crewdson, Peter Garfield, Morgan Bulkeley, Stephen Hannock, Tom Patti, and others.

Well-known institutions such as the Metropolitan Museum of Art, Mystic Seaport, the Smithsonian Institution, the Guggenheim, and the Tate Gallery have all borrowed objects from Berkshire Museum’s fine collections. Original exhibitions created and curated by Berkshire Museum staff, incorporating items from the collections, have traveled to other museums. Armed and Dangerous: Art of the Arsenal traveled to the Memphis Brooks Museum of Art in Memphis, Tennessee, in 2012.

In 2008, Berkshire Museum completed Phase II of an extensive renovation which included the replacement of the copper roof, the new 3,000-square-foot Feigenbaum Hall of Innovation, and the installation of a heating, ventilation, and cooling (HVAC) system.