L ondon’s Weekly Fine Jewels Edit contains an eclectic mix of period, vintage, retro and contemporary jewels. Notable designers include Cartier, Van Cleef & Arpels, and David Webb. From a mid-19th century necklace mounted with a collection of hardstone intaglios to a 1950s sapphire and diamond bracelet by Cartier London, executed in the late Deco style, and a collection of yellow gold jewels from the 1940s through to the 1980s, showcasing the enduring popularity for the warm hues of gold, the sale encompasses a wide selection of jewels catering to all tastes.

C artier opened its first London branch in 1902 on New Burlington Street, moving to Bond Street in 1909 where it has remained to this day. Initially jewels came from the Paris workshops that supplied the Parisian branch and it was not until 1921 with the establishment of the English Art Works that jewels began to be made on site in Cartier’s own distinctively British workshop. The Cartier branches from Paris, to New York and London all retained their own distinctive style, the London branch reflecting restrained British good taste. The firm took on about five to six English apprentices a year, reflecting the firm’s view that it was their duty to offer opportunities to the local workforce.

This Cartier bracelet exhibits a distinctive Deco flair, not surprising as jewellery production essentially ground to a halt during the War years, only emerging in the 1950s with the Festival of Britain and the final removal of wartime restrictions. Despite the optimism of the 1950s, luxury goods including jewellery were heavily taxed, reducing the appetite for the lavish jewels of the pre-war years, making the current bracelet an even more unusual and rare creation. There were always exceptions, however, of which this bracelet is an example, with its influence of Art Deco in the early 1950s, but with a nod to modernity with its scroll motifs and asymmetrical use of baguette diamonds.

T he Greeks believed pearls to be the tears of joy shed by the goddess Aphrodite, consequently viewing them as a symbol of love, devotion and marriage: Julius Caesar limited the wearing of pearls to aristocrats only; Cleopatra famously crushed one into a glass of wine and drank it in order to win a bet with her lover Marc Anthony over who could throw the most lavish dinner party (she unsurprisingly won); and in New York in 1917 Cartier exchanged a two-row natural pearl necklace for a mansion on 5th Avenue, which still operates as their headquarters today.

An amazing accident of nature, pearls do not require a lengthy cutting and polishing process to reveal their beauty as with most other gemstones, and no two are identical, fueling their image of exclusivity and rarity. One of the most famous historical figures who capitalised on this symbolism of purity and majesty was Queen Elizabeth I. In paintings such as the Rainbow Portrait on display in Hatfield House, she is covered in pearls, enforcing her image of the ‘Virgin Queen’.

In jewellery, the lustre and composition of pearls offers something that can’t quite be achieved using gemstones, seen in the 1930s pearl and diamond clip brooch, which juxtaposes the brilliance of the diamonds against the soft glow of the pearls, and in diamond and pearl brooch from the late 19th century, using the irregular shape of a baroque pearl to create a sculptural jewel.

The Fabulous Jewels of Graff

Continuing the recent success of the capsule collection, Graff: Light & Form, we are pleased to present another selection of jewels by the famed diamantaire. For more than 50 years, the House of Graff has represented some of the world’s rarest gemstones. Charismatic and visionary founder Laurence Graff’s extraordinary success rests on his innate understanding of diamonds and his insistence on perfectly proportioned cuts, optimizing the brilliance, color and overall quality of every stone he handles.

F ringed with multicoloured pendants depicting Greco-Roman deities, this extraordinary demi-parure beautifully illustrates the vogue for cameos and intaglios that swept Europe in the 19th century.

Jewelry
The Jewel that Started my Collection: Valery Demure


‘Glyptics’ is the catch-all term for these engraved gemstones, which fall into two main types: cameos and intaglios. In cameos, the design stands out in three-dimensional relief against a receding background. In these intaglios, the opposite is the case – the design is carved directly into the stone. Traditionally depicting an array of deities and figures of power, as well as numerous other subjects, glyptics have their origins in Ancient Greece and Rome, where they were powerful symbols of wealth and authority, treasured for their beauty and workmanship, and occasionally imbued with talismanic properties.

In the opening years of the 19th century, this historic art form found a series of new champions, most notably Napoleon Bonaparte and his first wife, Empress Joséphine. The classical aesthetic they ushered in upon their rise to power helped to reinforce Napoloeon’s claims to dynastic legitimacy by borrowing from ancient Roman images of imperial grandeur, and created a fashion for glyptics which lasted decades, bringing them to a wider audience than ever before.

This matching set of necklace and earrings depicts the god Apollo at its centre, among a host of female figures and goddesses in profile, each in a simple collet setting and linked by sleek snake-link chain. It was retailed by Hunt & Roskell, one of the most prominent English jewellers of the 19th century.

Hunt & Roskell was founded in 1819 by Paul Storr, who had worked as a silversmith for the renowned former Crown Jewellers Rundell, Bridge & Rundell. Initially trading as Storr & Mortimer, the firm underwent many changes of name throughout its lifespan as various partners left and joined the firm, eventually becoming Hunt & Roskell between 1843 and 1897.

From their premises at 156 New Bond Street and their workshop in Clerkenwell, Hunt & Roskell provided jewellery, watches and silverware to an elite clientele, participating in the Great Exhibition of 1851, as well as exhibitions in New York (1853) and Paris (1867), eventually gaining a Royal Warrant from Queen Victoria, who was herself an enthusiastic collector of glyptics.

While interest in this historic art form waned in the late 19th and early 20th centuries, glyptics are once more in vogue thanks to a number of contemporary jewellery designers such as Hemmerle, Wallace Chan and JAR – testament to their classical beauty and enduring power.

With its bold colour scheme and sophisticated design, this necklace and earring set, in its original box, is both a rare survival of its era, and also a highly wearable and strikingly contemporary addition to anyone’s antique jewellery collection. 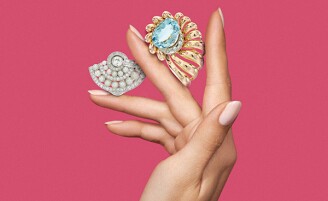