T hroughout history, large diamonds offered at auction have never failed to captivate an audience and elicit a sense of excitement and awe. The Key 10138 weighs 101.38 carats and has been graded by GIA as D Colour, Flawless, and Type IIa. There are only a small number of faceted diamonds that weigh over 100 carats throughout history and it is rarer to find such a diamond with perfect colour and clarity. Type IIa diamonds are themselves very rare as they contain no IR-detectable nitrogen or boron impurities in their chemical structure and represent less than 2% of all diamonds mined. Considered the most chemically pure diamonds, they tend to display exceptional transparency.

The Key 10138 is the first important diamond in the world to be auctioned with cryptocurrency as an accepted method of payment. It was named to symbolise the unlocking of a new era in commerce and technology, and thus is a key to history. The Key 10138 will undoubtedly become a diamond that history remembers as it takes the culmination of humanity’s work and knowledge on diamonds thus far, and turns the key to unlock a still more brilliant future.

“…the diamond, like a knight of old – brilliant and resistant, is the emblem of fearlessness and invincibility…”

Pear-shaped diamond-cutting techniques date back to the 15th century when, in 1475, the Flemish jeweller, Lodewyk van Bercken, invented the scaif—a tool used for polishing stones on a wheel infused with diamond dust and olive oil. This revolutionised the diamond industry by allowing cutters to hone gemstones with accurate symmetry to maximise light returns. Through this, van Bercken made the world’s first pear-shaped diamond-cut. Soon, European royals and aristocrats were fascinated by these fantastic gems that were far more brilliant than any they had seen. Throughout his life, patrons commissioned van Bercken to work on some legendary diamonds, such as the Florentine Diamond, the Sancy and the Beau Sancy.

Many of the most important diamonds in history are pear-shaped, including those of royal provenance. Perhaps the most famous pear-shaped diamond is the Cullinan I, also known as the Great Star of Africa, that is mounted in the Imperial Sceptre of Great Britain and weighing 530 carats. The Sovereign’s Sceptre was originally created by Sir Robert Vyner for King Charles II’s Coronation in 1660 and was renewed in 1911 when King George V instructed the Cullinan I to be mounted at the top of the shaft. Cullinan I is the world’s largest cut diamond of the colourless range, and the original Cullinan Diamond was the largest gem-quality diamond ever found. The Cullinan III, also known as the Lesser Star of Africa, is also a pear-shaped diamond of 94 carats. It is often worn as a brooch by Queen Elizabeth in combination with the Cullinan IV.

Other historical pear-shaped diamonds include the Sancys, the Arcots, and coloured diamonds such as the Dresden Green, and Farnese Blue – which was recently auctioned at Sotheby’s Geneva Sale in 2018. Relatively modern examples of important pear-shaped diamonds include the Taylor-Burton Diamond as well as the Millennium Star. The 69-carat Taylor-Burton diamond was the most expensive publicly sold jewel of its time in 1969. The auction was originally won by Cartier, but Richard Burton was so furious he was outbid and insisted he would buy back the diamond at any cost because—as he put it—it should be ‘on the loveliest woman in the world.’ He purchased the diamond from Cartier the day after and the diamond was famously worn by Elizabeth Taylor at Princess Grace of Monaco’s 40th birthday and the 42nd Academy Awards. The Millennium Star is the world’s second largest colourless and flawless pear-shaped diamond, purchased by De Beers in the 90s. It took over three years for the diamond to be studied and polished into its final form of 203 carats. It was displayed in 1999 at the De Beers Millennium Diamond Collection exhibition.

*If you wish to register for in-room bidding, please RSVP at chloe.lau@sothebys.com. Seats are limited due to social distancing measures and will be only allocated to registered clients on a first-come-first-served basis. 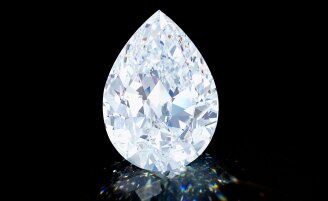