W e are honoured to present Select Works from the L.A. Mayer Museum for Islamic Art | Jerusalem as a dedicated single owner sale in London on October 27th. The works on offer range from early Qur’an leaves to Ottoman textiles, pottery from across the Islamic lands, silver-inlaid metalwork, as well as exceptional examples of Islamic arms and armour. A group of fine rugs and carpets is also included in the sale. The exhibition will take place in London from October 24th to 26th.

Encompassing the breadth of the Islamic World at its height, with multifarious media spanning three continents, from Spain to South East Asia over almost a millennium and a half, the L.A. Mayer Museum for Islamic Art is a jewel located at very heart of the Islamic World, in the Holy City of Jerusalem.

Since it first opened its doors to the public in 1974, the L.A. Mayer Museum has held true to its founding principle of promoting cultural dialogue through the appreciation of art. Home to world-renowned collections of Islamic art and watches, the museum is a unique institution founded by philanthropist Vera Bryce Salomons (1888-1969), whose family history tells a story of enlightened activism in the cause of social justice beginning in the 19th century with Vera’s great-uncle Sir David Salomons (1797-1873).

Conscious of the absence of places for the public to see works of Islamic art, Salomons set out to establish the L.A. Mayer Museum for Islamic Art, naming it after her friend and teacher Professor Leo Aryeh Mayer (1895-1959), the distinguished scholar and professor of Islamic art and archaeology. Like Salomons, Mayer was a true believer in the relevance of Islamic culture and its ability to aid peaceful coexistence between Jewish and Arab peoples. Vera Salomons enlisted the help of Professor Richard Ettinghausen to build the museum’s collection. One of the towering figures in the field of Islamic art in the 20th century, he published over 200 papers on Islamic art and architecture over a career spanning more than 40 years, and served as the chief curator at the Freer Gallery of Art, Washington D.C.

The 12 years he spent collaborating with Salomons on the museum’s acquisitions between 1965 and 1979 are reflected today in a wealth of pieces from across the Islamic geographical arc, hand-picked from the great auctions and art dealers of the period, notable for their quality, provenance and academic interest.

The cosmopolitanism of Salomons, Mayer and Ettinghausen is very much in evidence today, not only in the museum’s holdings, but also in its cultural activities, exhibitions – including the juxtaposition of contemporary and classical art – as well as in its educational initiatives.

We are pleased to include a beautiful and colourful selection of ceramics in this sale, including tiles, animal figurines, bowls, jugs and many more.

This sale also includes a fine selection of selection of rugs and carpets spanning several centuries and geographies.

Arms and Armour through the Ages 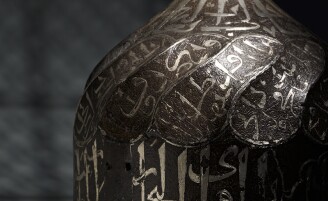