S otheby’s are delighted to be holding a non-selling exhibition of Iranian Modern Master Mohsen Vaziri-Moghaddam In our galleries alongside highlights of the 20th Century Art/Middle East auction.

Mohsen Vaziri Moghaddam : Spirit of the Desert / Abstraction Against the Grain

Mohsen Vaziri Moghaddam (MVM) stands out without a doubt as one of the most pioneering and distinguished Iranian modern plastic artists who reached global heights as early as the 1950s; not only making a breakthrough for Asian modernism in Western and international capitals and Biennales, but above all speaking a transnational visual language. If one looks only at the year 1962, MVM exhibited in three different Biennales (Tehran, Venice, Sao Paulo), which certainly played a part in the acquisition of his work by the MoMA in 1965. Rooted in exceptional experimentations between local traditions and global aesthetics, pushing the limits of abstraction to a form of ecological art, Vaziri Moghaddam’s contribution to Euro-Asian modernism is a fundamental one.

The works from 1956-1957 (Untitled), though made at a time when MVM was already laureate of the Accademia di Belle Arti di Roma, hence physically far from his hometown, reflect the tremendous importance of Cubist art and theories in Iran in the 1950s – mainly circulating through circles like the Khorous-e-Jangi (Fighting Rooster) avant-garde journal, initiated by Jalil Ziapour (involving other visual artists such as Sohrab Sepehri and Bahman Mohassess). If MVM – reluctant to any kind of collective commitment and artistic groups – doesn’t belong to the Saqqakhaneh aesthetics, he would share for a fairly short period the impulse for Persian miniature and mythology reshaped in a modern fashion; one could speak of a cubist vernacular. The work on paper ‘Naked Woman’ demonstrates a deep dialogue with some of Picasso’s Odalisques (a sign of reappropriated Orientalism) blurring the anatomic structure within systematic abstract patterns, similar to that of a mosaic, painted vaults and other kaleidoscopic-architectural visions. Nakedness nevertheless plays its erotic part, beyond an idealised sense of beauty and driven by the fetish eye who fragments the body into its favourite pieces.

MVM’s radical abstract experiments began as early as the end of 1950s when still living in Italy; his close contact with the Mediterranean seashores – and his magnetic attraction for this blend of landscape of earth and water – which would pave the way for his emblematic cycle of the ‘sand works’.

During his studies at the Academia deli Belle Arti, MVM spent time in Toti Schaloja’s studio called “Bianco e Nero” where the concept of minimalist art first occurred to him; a place where a whole range of avant-garde ideas (from cybernetics to Zen philosophy) were discussed. This exceptional framework of experimentation and new intellectual atmosphere crossed, in time, with the artist’s ‘primitive’ revelation about the sheer creativity enclosed in the physical (and probably metaphysical) union of the hand, the sand and the atmosphere. Eventually his abstract compositions first exist as an atmospheric surface encoding a certain level of sedimentation and amount of particles. There is a notion of natural/spontaneous creation at the core of MVM’s practice entailing therefore a radical sense of critique towards the Ego of the artist.

The work Untitled (1959) shows us one of the most incredible abstract landscape of telluric and cosmic visual manifestations, playing between different scales of vision; in a way as close to Google earth mapping imagery and to a readymade fragment of the earth flaking under our feet - between upward and downward visions. What is peculiar and fascinating is how MVM maintains a dialogue with some of Ecole de Paris and the Informal school’s most original protagonists (Alberto Burri, Henri Michaux, Jean Dubuffet, Antoni Tapies…) while at the same time, following a completely experimental path; close to an esoteric attitude, in the sense that MVM’s art, beyond appearances, doesn’t divulge easily its profound material and temporal process; even less its influences.

The effects of the works with various imaginary landscapes but also real ecosystems – among which the Iranian desert but also a deep interest in interstellar space – unveils as an optical work-in-progress, rather against the grain. Paintings moving in and out in front of us with the vibrations of the earth and sand sedimented in this unique experience; as MVM also integrated real sand to his works, to testify for his most typical and elaborated visual theme: the stripes of fingerprints randomly spread throughout the paint/sand/earth (see Untitled, 1962). Aridity and earth tones dominate but the feeling of air and water (and at some instance fire) are also present in the fluidity and breath of MVM trace-making and patterns all throughout the 1960s.

The southwestern and central Asian arid zone to which Iran belongs has served as a conduit for population movements and cultural influences since the earliest evidence of human occupation. Nevertheless MVM – who made his return to Iran in 1963 – likes to remind us of this ancestral feeling of the desert and infinity right upon the first human intervention or ‘hand’ marking its territory; tracing anthropomorphic routes in the abstract void. In a way, he also reminds us how the deserts (representing half of the land), has been a dominant feature in Iranian geography; including the most current and tragic consequences of water crisis and dryness. MVM’s relation to nature has something silently schizophrenic, between contemplation of the sublime (another place for undermining the artistic Ego in order to let nature speak) and containment of the potential catastrophes, ruins and extreme climate change. Just like a reminder of the breath of light shining out of the first crack in the arid land.

The artist himself, in an interview in Iran, explained that:

"As time went past, I drew my five fingerprints with a precise geometric shape, on a colourful background, 1 cut these shapes and freed them. The reliefs series from 1965-68 is the result of my sand paintings. At that time, I gave a lot of thought to structural space, to the discipline of shapes and rhythm deliberately taken from the repetition of arches and roofs in village houses in the desert”.

The theme of atmospheric or cosmic systems at stake with MVM’s compositions comes back with his works from the 1980s and the ‘Haras va Parvaz’ (Fear and Flight) series. There MVM creates a heartfelt postmodern shift or anachronistic return to a post-cubist 3D glasses visual universe. Hiding behind birdy almost monster patterns, sculpted in wood or imposed on white background, MVM’s flying shapes were created both in mobile – often installed by the artist in sheer nature – and on canvas, like the work here, Untitled, 1986. The kaleidoscope of colours and moves, somehow a choreography of semi-abstract shapes, expresses the playfulness and complexity of a computer programme – or rather real landscapes and ecosystems in fragmentation and re-composition – from which infinite combinations can take shape and burst out. 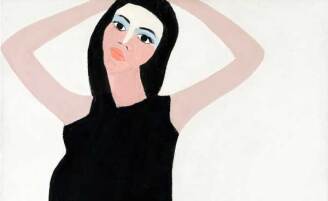