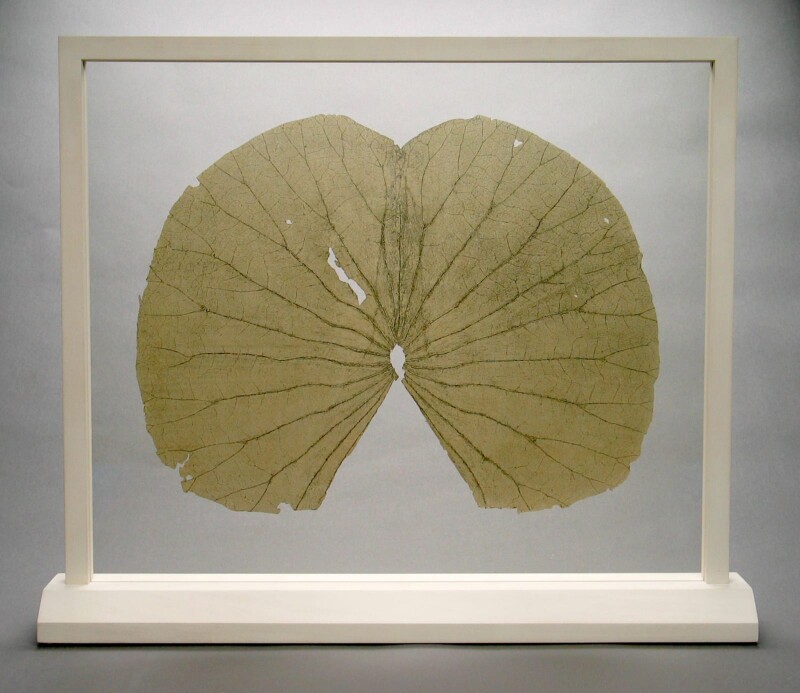 Printer's proof from an edition of 6

"... what is important is not so much what people see in the gallery or the museum, but what people see after looking at these things, how they confront reality again. Really great art regenerates the perception of reality; the reality becomes richer, better or not, just different."

As established by Sam Francis, The Lapis Press' prime directive has always been a creative collaboration with artists to realize their unique vision. Gabriel Orozco's 2004 Lotus Leaf series began as classic chine collé prints but took on another life as the work evolved through the creative dialogue between Orozco and Lapis.

Gabriel Orozco's interest in the natural world and its relationship with humans inspired him to have actual lotus leaves etched into the printing plates, creating a man made yet true rendering of the leaf. Every vein, tear, and insect bite was captured and imprinted on special custom milled Gampi paper matching the hues of the leaf. The proofs were made as chine collé soft ground etchings, individually cut to the shape of each leaf and adhered to a heavy fine art paper.

While working on the edition, Orozco felt the proofs lacked the organic authenticity he originally envisioned. He had a revelation while holding one of the tissue thin leaf prints up to the window: the exquisite purity that he was seeking was best displayed deconstructed and suspended in glass, illuminated all around, like a delicate specimen.

The Lapis Press collaborated with Gabriel Orozco to find a method inspired by displaying medical samples for mounting the tissue-thin etchings. The somewhat unorthodox technique used for this edition was an exciting challenge that resulted in a series of lifelike images that honors the natural world.

Signed in pen and numbered under base