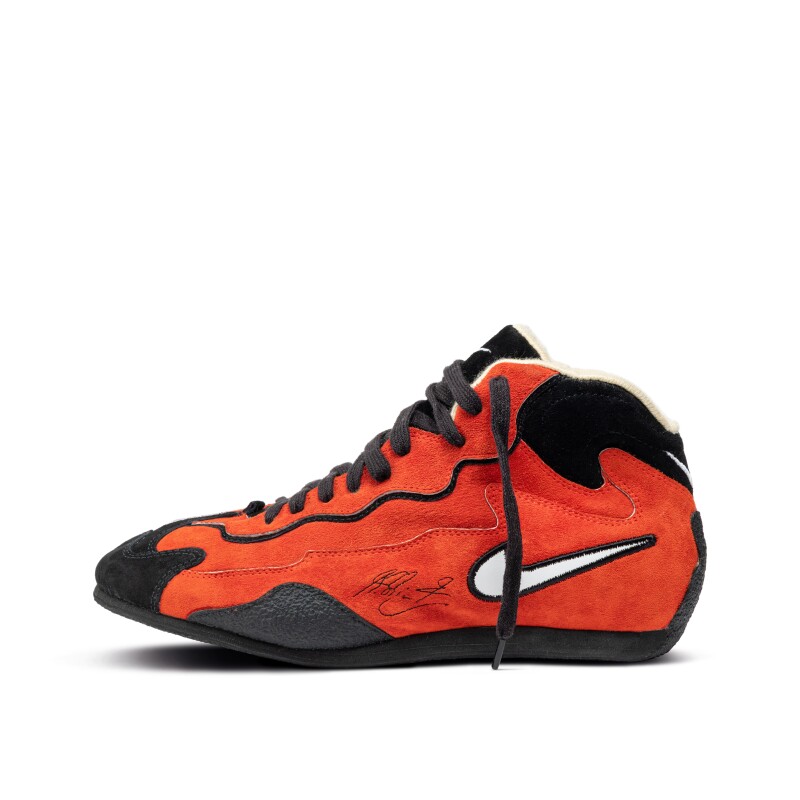 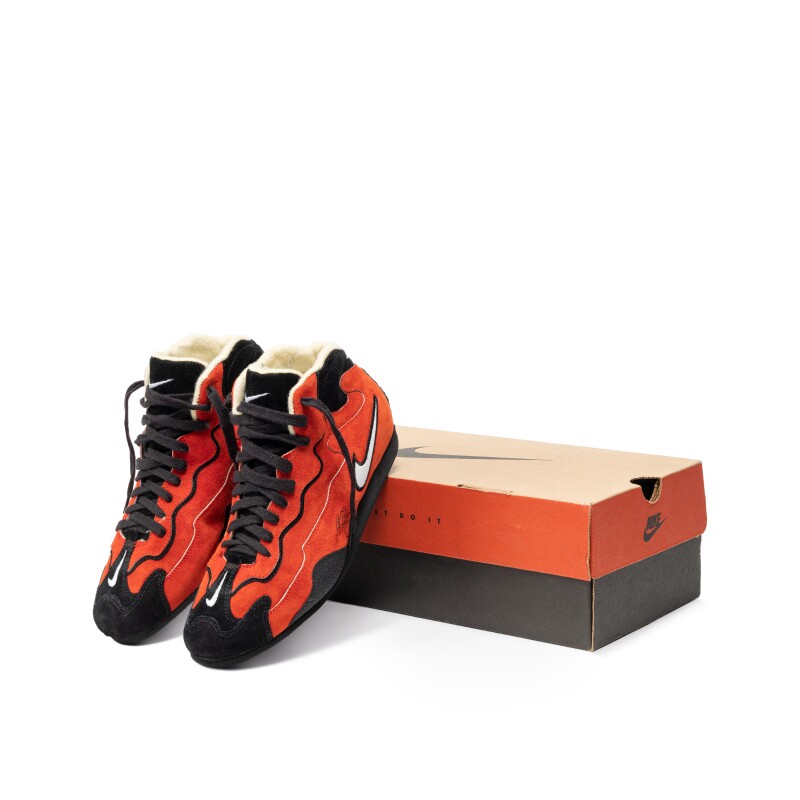 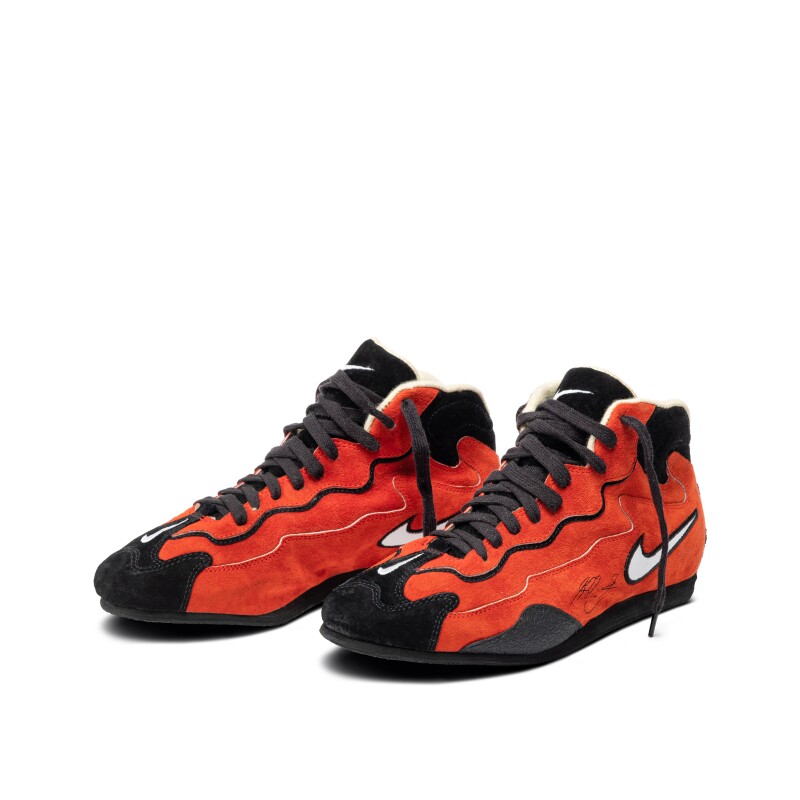 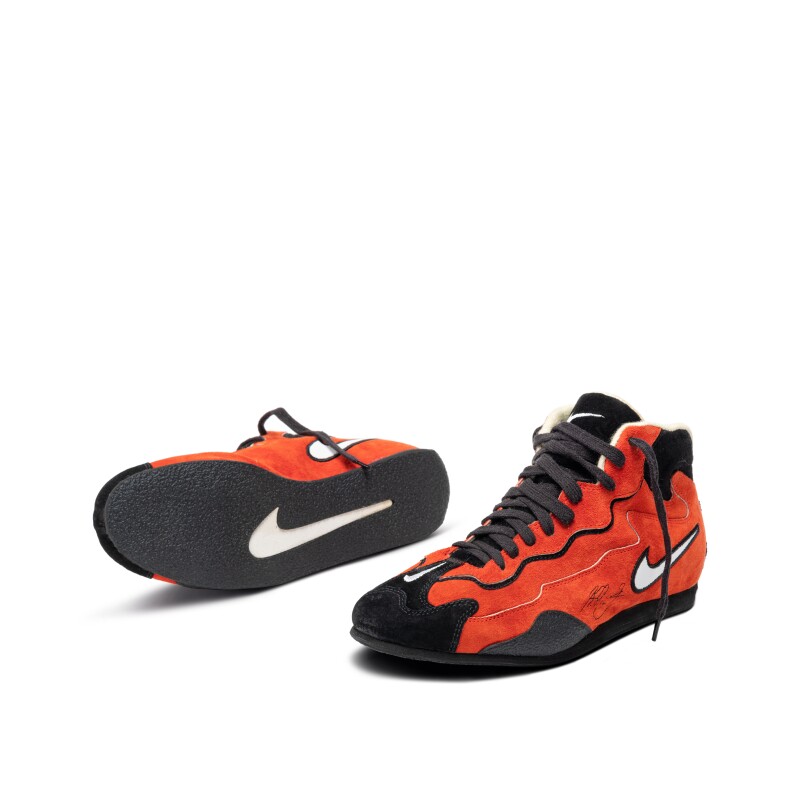 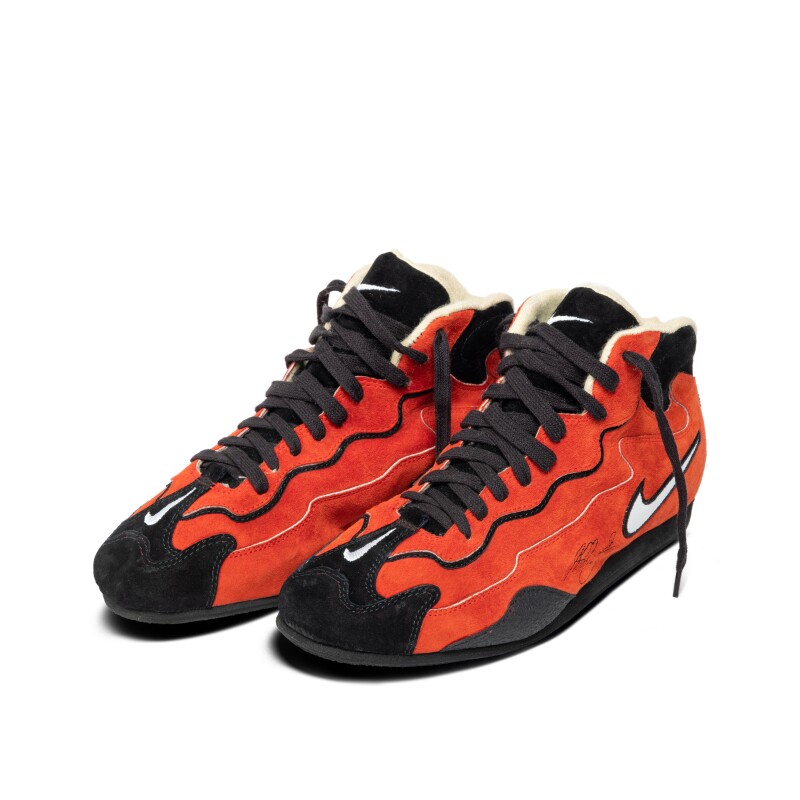 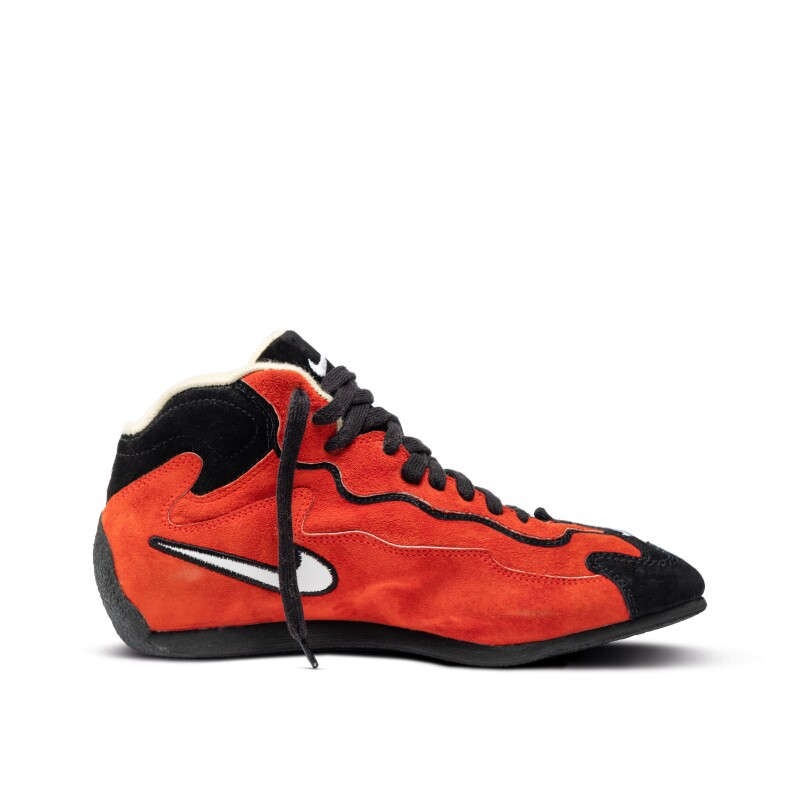 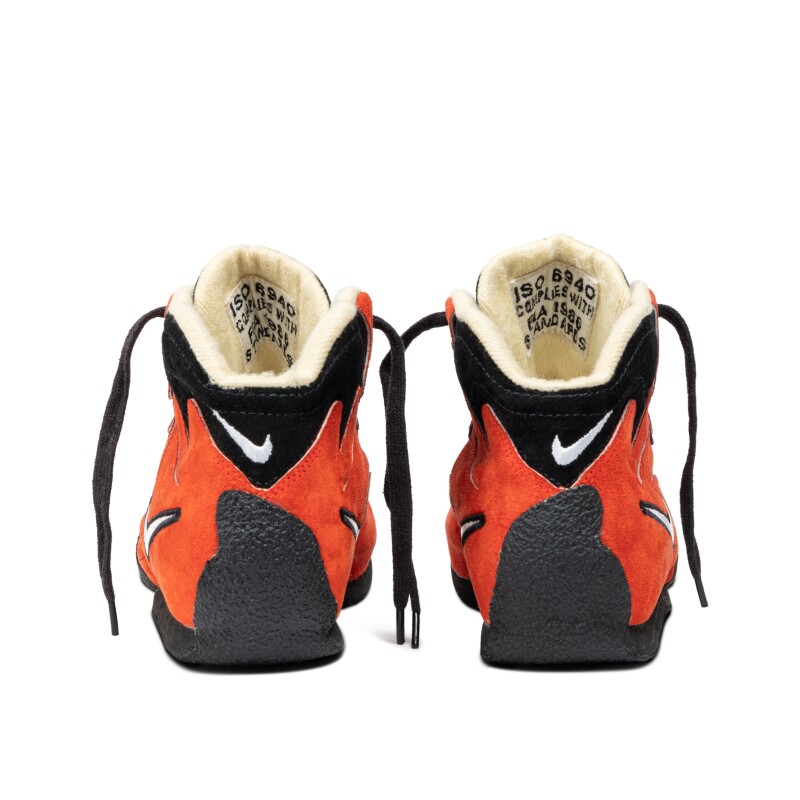 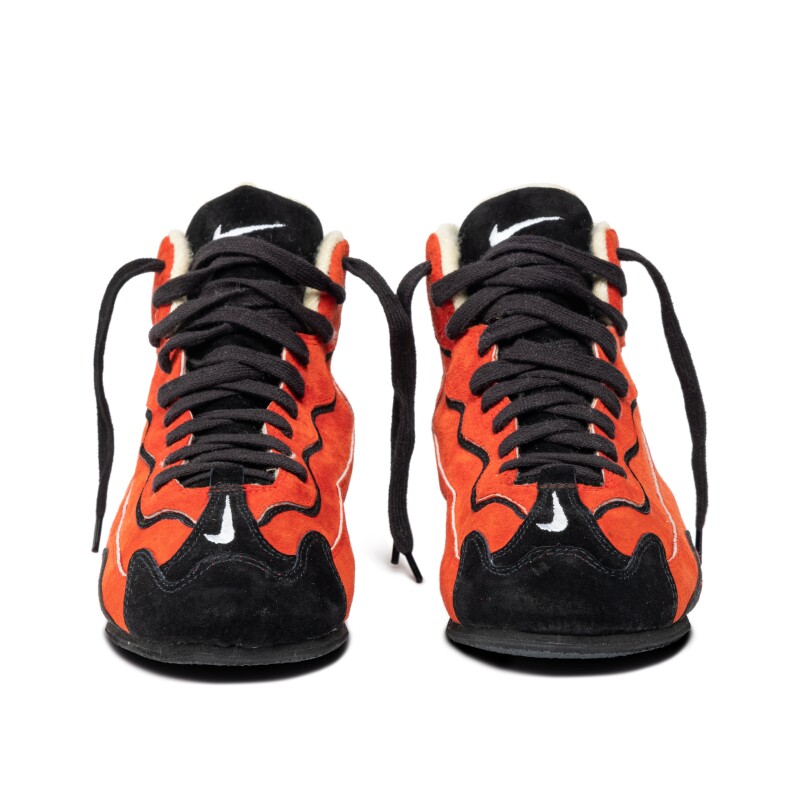 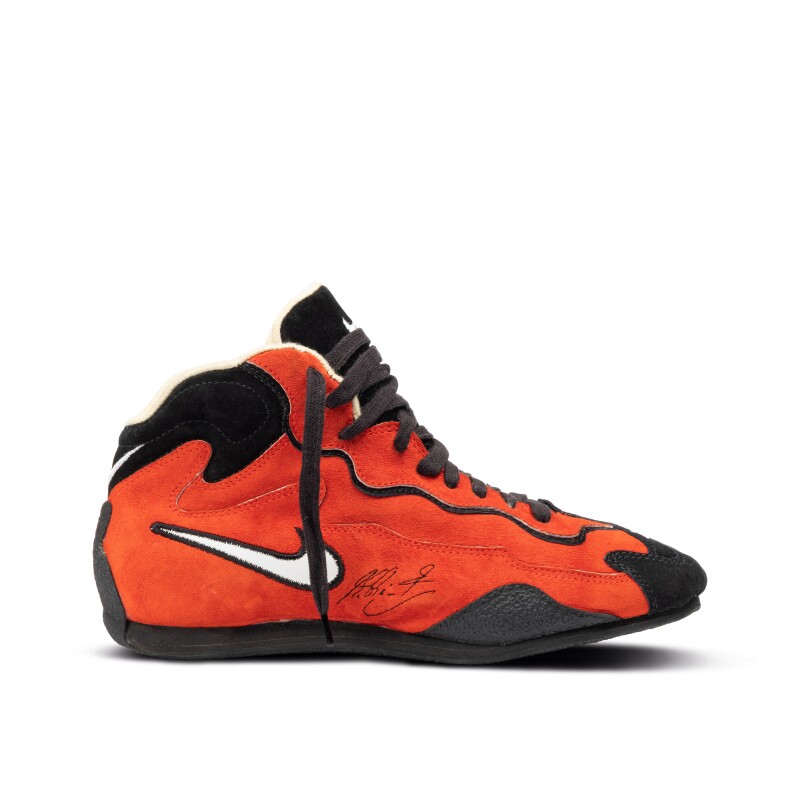 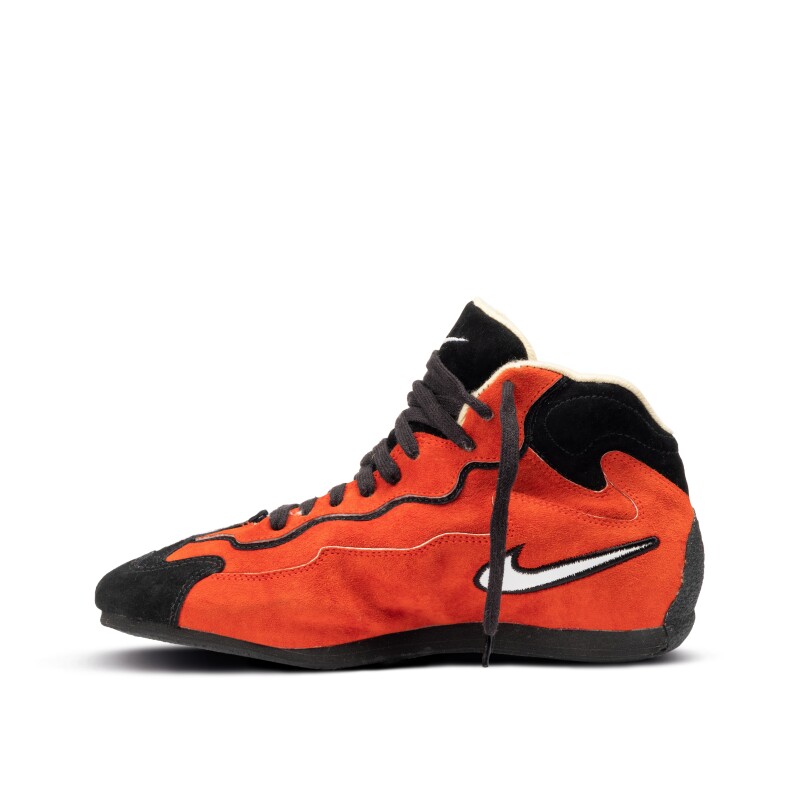 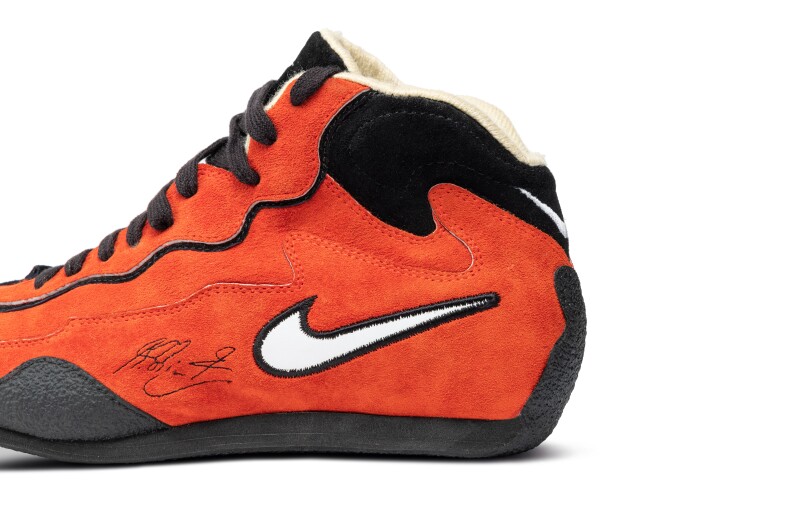 During his distinguished racing career, Formula One legend Michael Schumacher won seven World Drivers’ Championship titles, tied with Lewis Hamilton for the most all-time. His 91 Grand Prix victories are the second most in the history of the sport. Simply put, Schumacher was the most dominant force in Formula One racing for more than a decade and set the stage for the current generation of superstars.

Offered here is a pair of Michael Schumacher’s Nike racing shoes from his highly successful stint with the Scuderia Ferrari racing team. Nike produced racing shoes for Schumacher between 1996–2002 before FILA became the official apparel supplier for Ferrari.

Dressed in a predominantly red suede upper, the pair also features black accents, the original black laces and a black rubber outsole. Nike branding can be seen throughout, featured in white, and Schumacher’s signature is stitched on the exterior in black. “6 97 9 632” is stamped on the interior lining and the interior tongue tag reads: JSO 6940 COMPLIES WITH FIA 1986 STANDARDS.

A native of Germany, Schumacher rose to stardom in 1994 when he won his first World Drivers’ Championship with Benetton. He repeated the achievement in 1995 before making a highly publicized move to Ferrari, a team which hadn’t produced a world champion since Jody Scheckter in 1979. The arrival of Schumacher marked the beginning of a new era of unprecedented success for Ferrari.

After three wins in 1996 and five more in 1997, Schumacher made a concerted push for the title in 1998 but came up just short in second place overall. The frustrations continued in 1999 when Schumacher suffered a broken leg in a crash at the British Grand Prix. Though the injury dashed his title hopes that season, he was determined to return stronger than ever.

In 2000, Schumacher finally captured his first World Drivers’ Championship with Ferrari. And that was just the beginning. Schumacher won the championship in each successive year from 2001–2004, giving him a record seven total championships for his career.

Many fans, analysts and fellow drivers have credited Schumacher with transforming Ferrari into the most successful team in Formula One history. British Formula One champion driver Jackie Stewart said, “Michael brought Ferrari from 21 years of not winning a world title to being champions many times. I put that down much more to him than president Luca di Montezemolo or team boss Jean Todt. Without Michael Schumacher it would not have happened.”

Just one year later in 2013, tragedy struck when Schumacher suffered a serious head injury during a skiing accident. The tragedy left Schumacher in a coma for several months before he began a lengthy and ongoing rehabilitation process. Schumacher has remained out of the public eye during his recovery. The Formula One community, however, continues to celebrate and support the beloved driver.

The sneakers are in pristine condition and come in their original box.