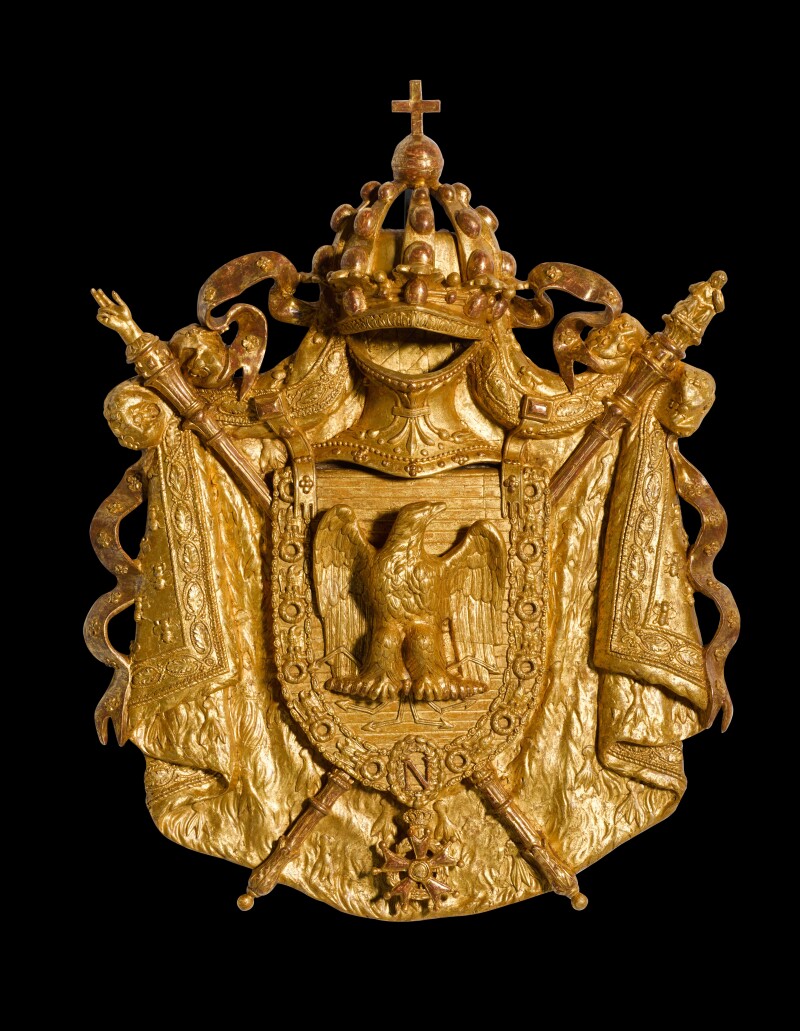 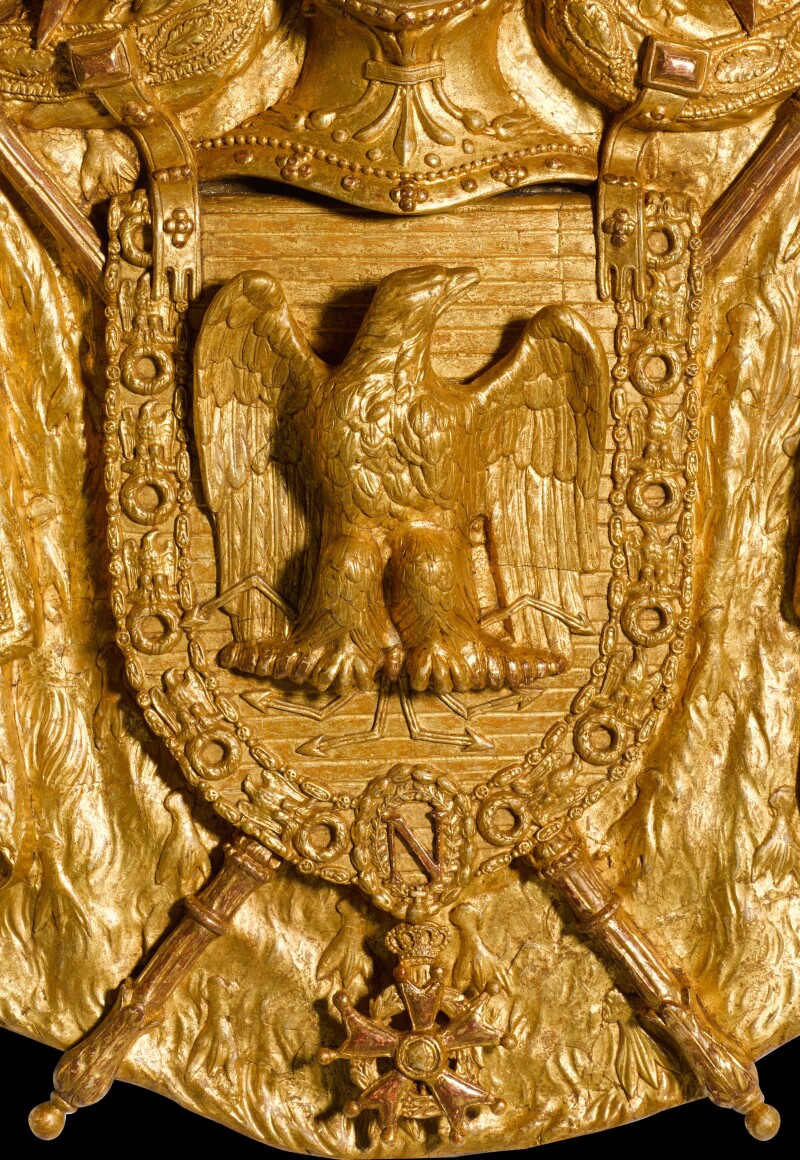 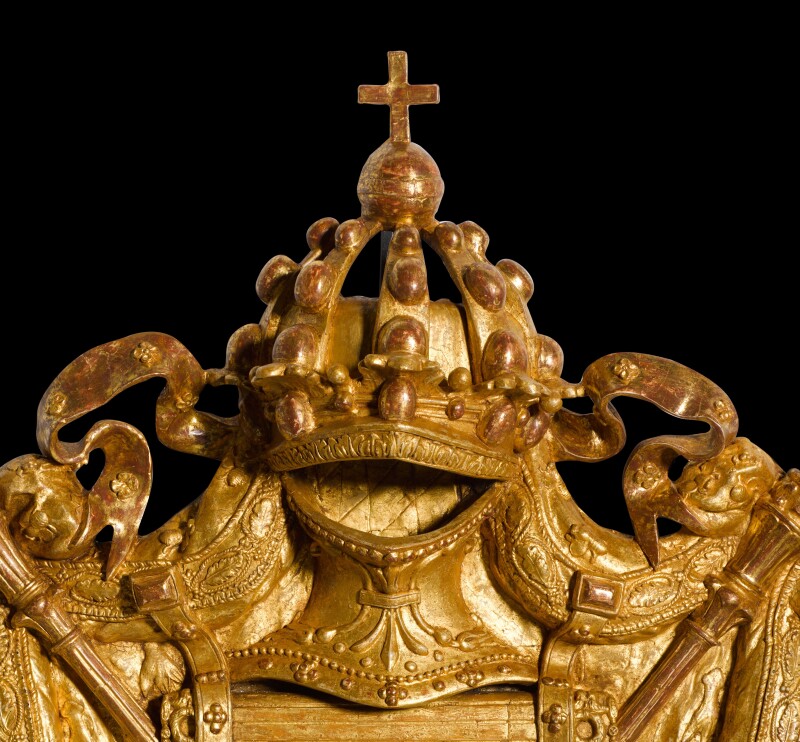 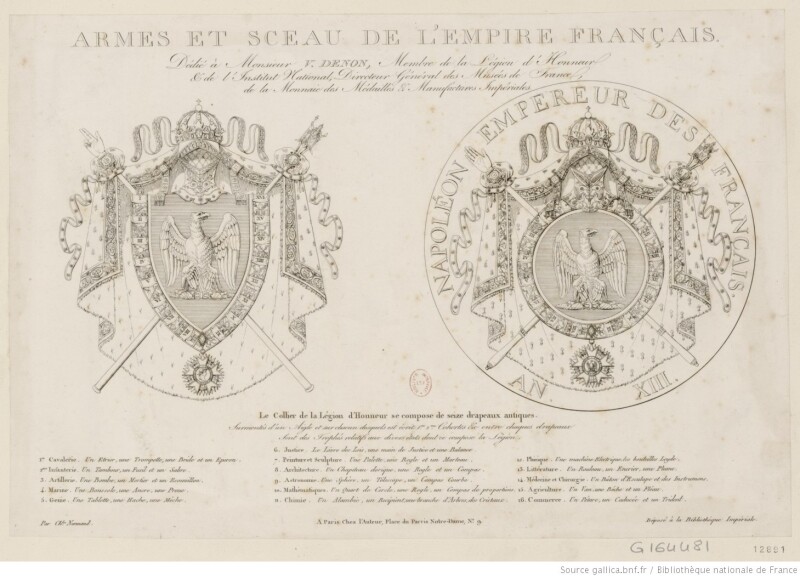 displaying the full regalia of the Empire first proclaimed in 1804, the central escutcheon bearing the imperial eagle with a thunderbolt in its claws framed in the collar chain of the Grand Master of the Order of the Legion d’Honneur set against the imperial mantle of ermine and velvet decorated with bees, the back with the crossed sceptre of Charlemagne and the hand of justice, surmounted by a helmet on the crest with open visor and the Napoleonic imperial crown topped with a globe bearing a cross, re-gilt

When the Empire was established in 1804, Napoléon Bonaparte (or Napoléon I) had to surround himself with a court and to demonstrate its dignity and power through every means available whether through furnishings or clothing. And since power expresses itself through symbols, this armorial is without doubt symbolic of the Imperial Era under Napoléon I’s reign. Displaying the full regalia and symbols by which the Empire style and Napoléon would become known for, such as the eagle and the bees, the armorial represents a key token of French history.

The Creation of Napoleonic Symbolism

With the new Empire, new coat-of-arms seemed obligatory. Members of the State Council discussed the matter in June 1804 and as good connoisseurs of heraldry, they had to choose which of the four creatures -the eagle, the lion, the elephant or the cock, all traditionally associated with sovereign power, seemed to best express the new regime. In parallel, the Council had to decide on the design of the sovereign’s cloak during his coronation, with bees (connected to the ancient Merovingian dynasty which ruled France in the 5th-8th centuries) being the final choice.

In the end for the coat-of-arms, the council decided in favour of the cock, a choice met in opposition by Napoléon: “The cock is nothing but poultry. The animal is too weak”. Later he remarked: “The cock is weak; it cannot be the symbol of an Empire such as France. You must choose among the eagle, the elephant, and the lion.”[1] Although Napoléon had originally decided on the reclining lion, he later changed his mind in favour of an eagle with wings spread.

Amongst many other references, the eagle was known as the attribute of the most powerful god of Ancient Greece and Rome, Zeus/Rome. It was also the symbol of two powerful empires in history, the Roman Empire and that of Charlemagne (the later who is also featured in this armorial on the sceptre). Thus, in adopting the eagle, Napoléon was associating his rule with these two empires.

According to a book from 1837, the task to formally design the coat-of-arms was given to the architect Jean-Joseph-Pascal Gay who possibly collaborated with Percier and Fontaine who were designing the decorations of the throne. It was in 1805 that the design of a seal and counterseal was made as showed in the engraving (fig.1) by Charles Normand dedicated to Dominique-Vivant Denon, the director of the Musée Napoléon and director of the Mint of medals. Interestingly, the eagle and bees are near other major symbols such as the chain of the Legion d’honneur (the highest French order of merit, both military and civil, established in 1802 by Napoléon), the hand of justice (symbol that the sovereign can exercise justice), the sceptre of Charlemagne or Charles V (the most prominent preserved regalia of France) and a helmet and crown (signifying military and imperial power).

The present armorial is therefore a unique manifestation of all the Napoleonic symbols in one object. It is also an opportunity to study up close the close relationship between political power and the decorative arts.