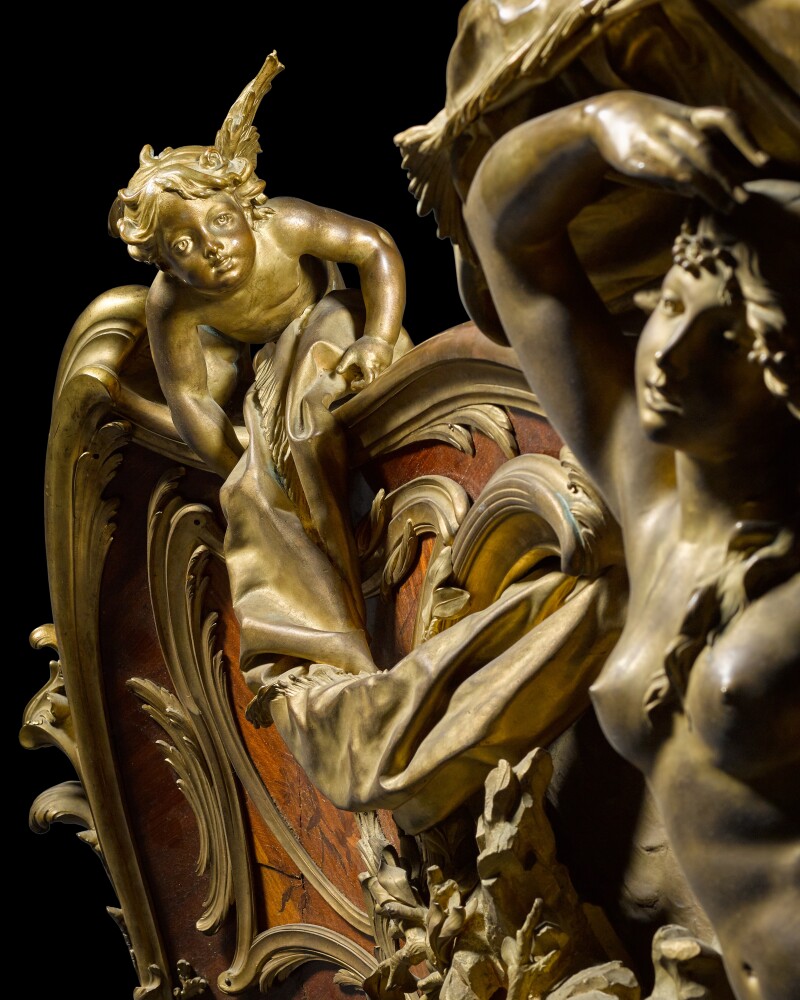 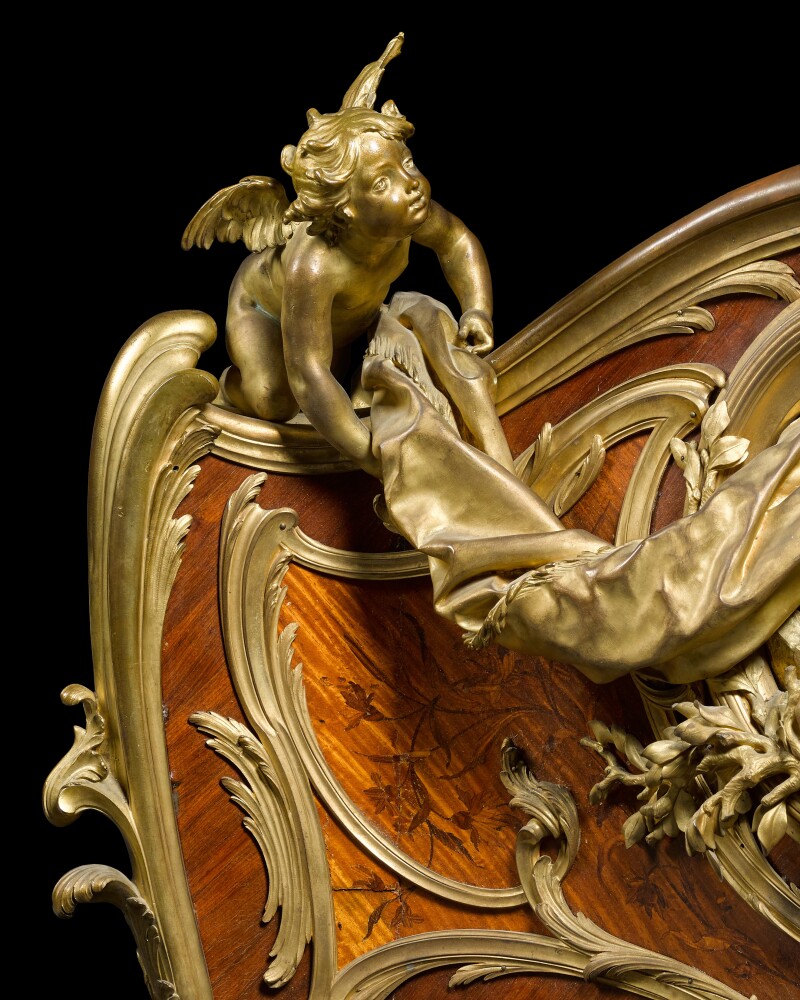 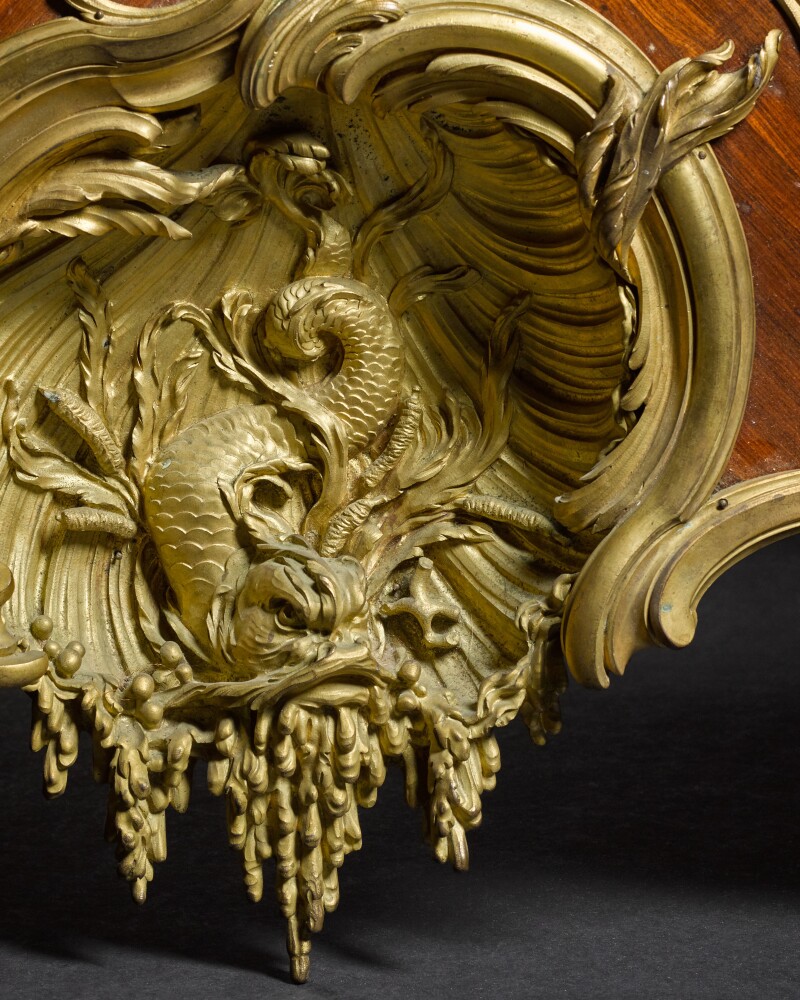 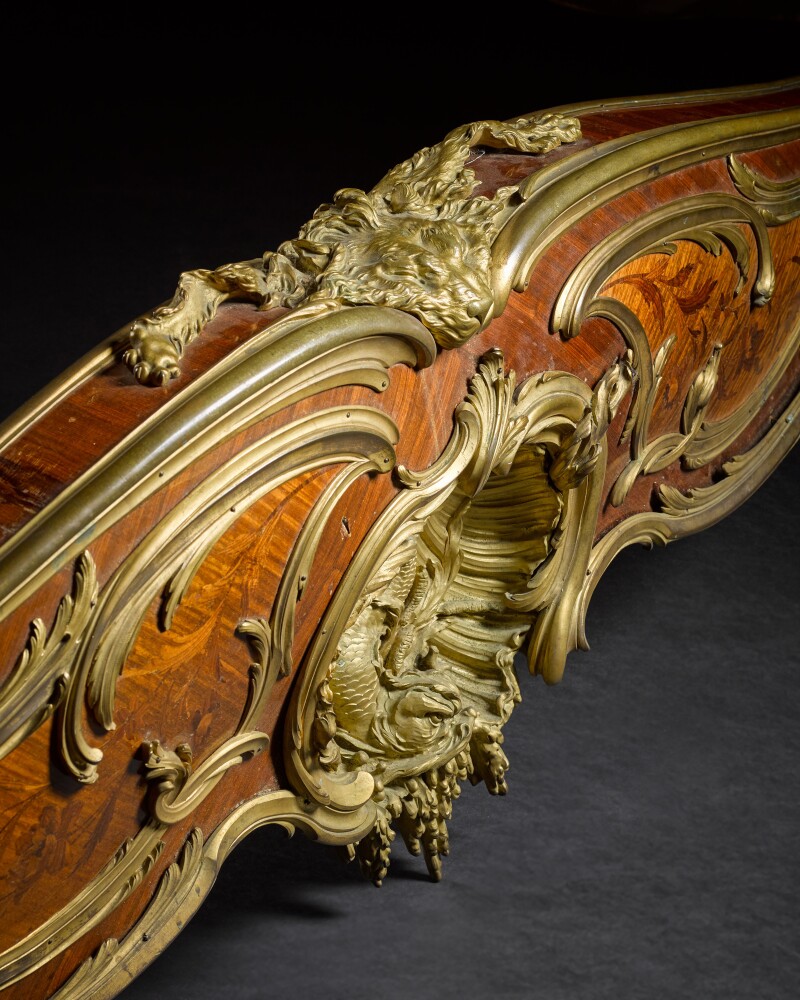 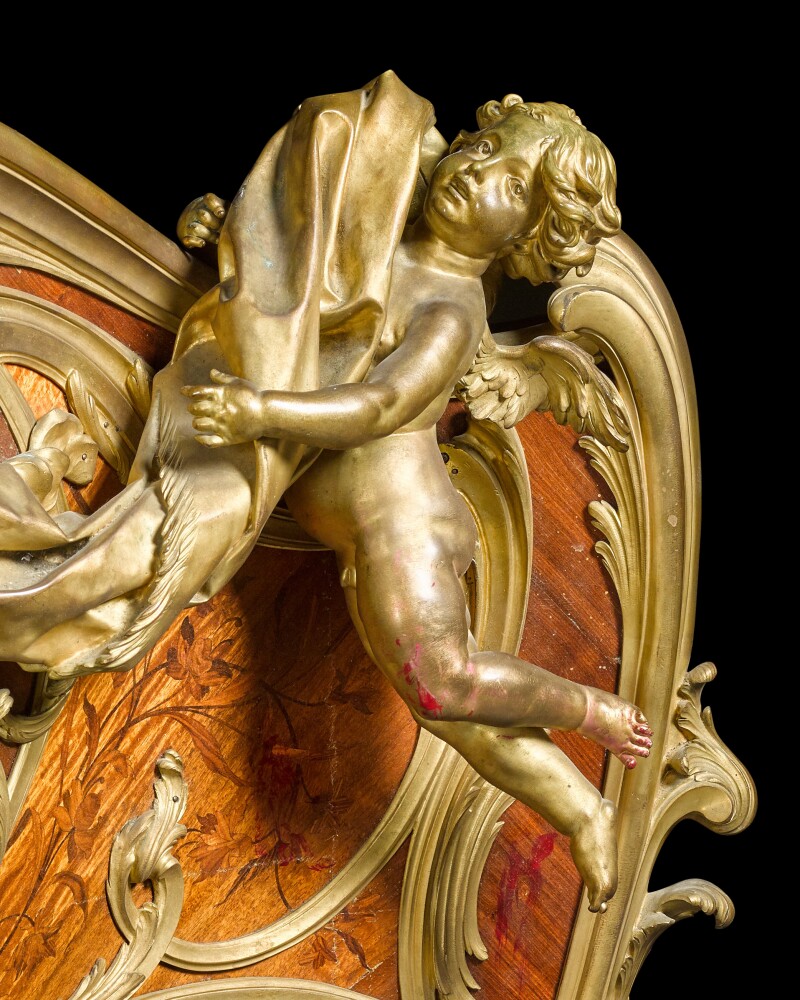 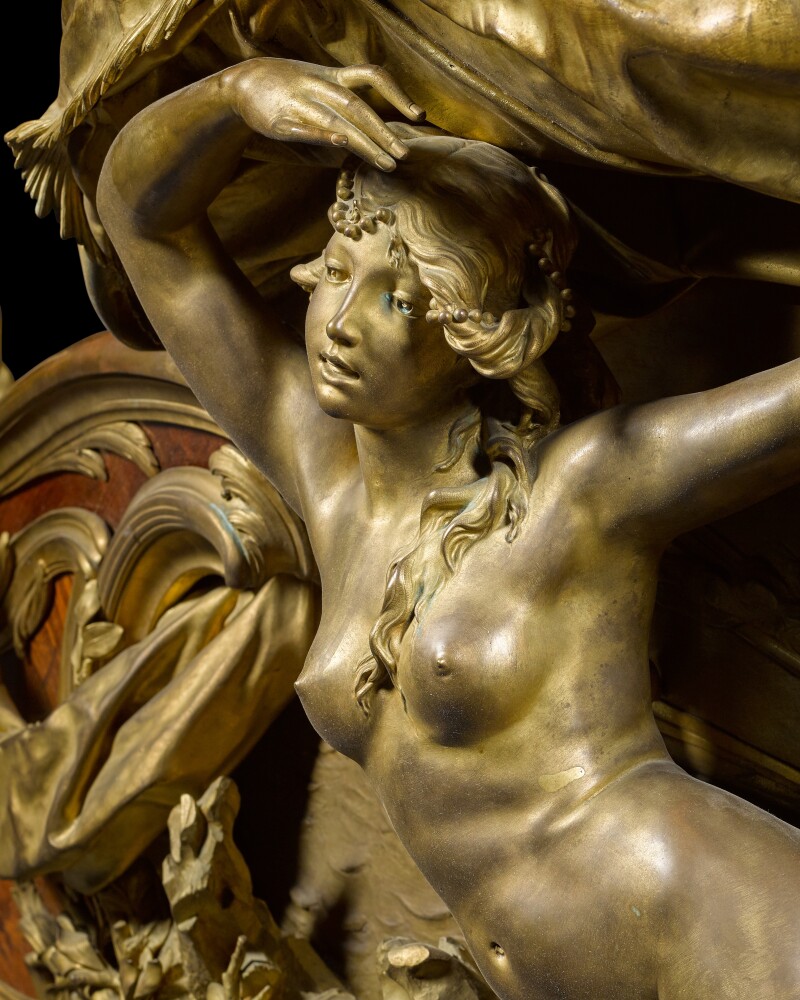 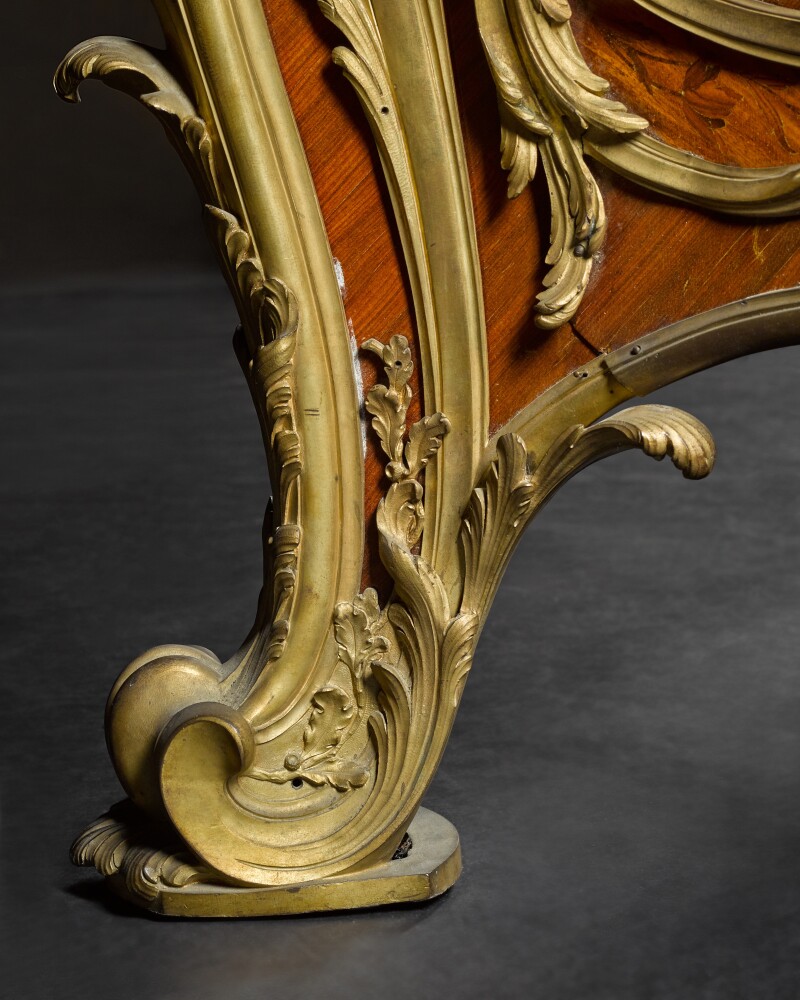 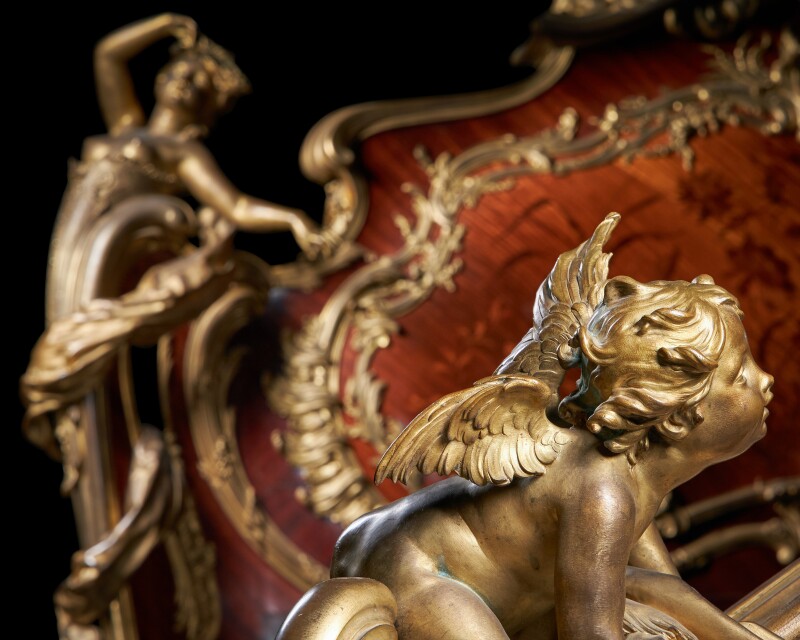 The serpentine rectangular gilt-bronze moulded headboard representing dusk, crested by a putto falling asleep on an armorial trophy and foliage, flanked by two nymphs on either side of a gilt-bronze moulded bombé panel inlaid with flowering vines, the similarly shaped offset footboard representing dawn of morning, centrally mounted with a naked female, possibly Aurora (the personification of dawn), raising covers off a bas-relief cast plaque depicting a sunrise over an ocean within an S-scrolled border framed with rockwork and clouds and flanked by hovering putti suspending cloth over a gilt-bronze moulded apron, flanking a bombé panel inlaid with trellis entwined with flowering vines on massive scrolling feet, each shaped gilt-bronze moulded rail centrally mounted with a lion's head over a shell and dolphin mount, signed and dated on the headboard 'Zwiener / Paris 1895'

Where acquired by the grandfather of the present owner.

For its organic and sculptural qualities, this extraordinary bed is a remarkable example of Emmanuel Zwiener’s work and an ultimate luxury statement of the Belle Époque which it so well represents. A masterpiece of ébénisterie, it demonstrates Zwiener's conceptual genius in combining the traditional Louis XV rococo spirit of the 18th century – through exuberant, bold gilt-bronze mounts and exquisite marquetry - with the more modern, contemporary Art Nouveau style.