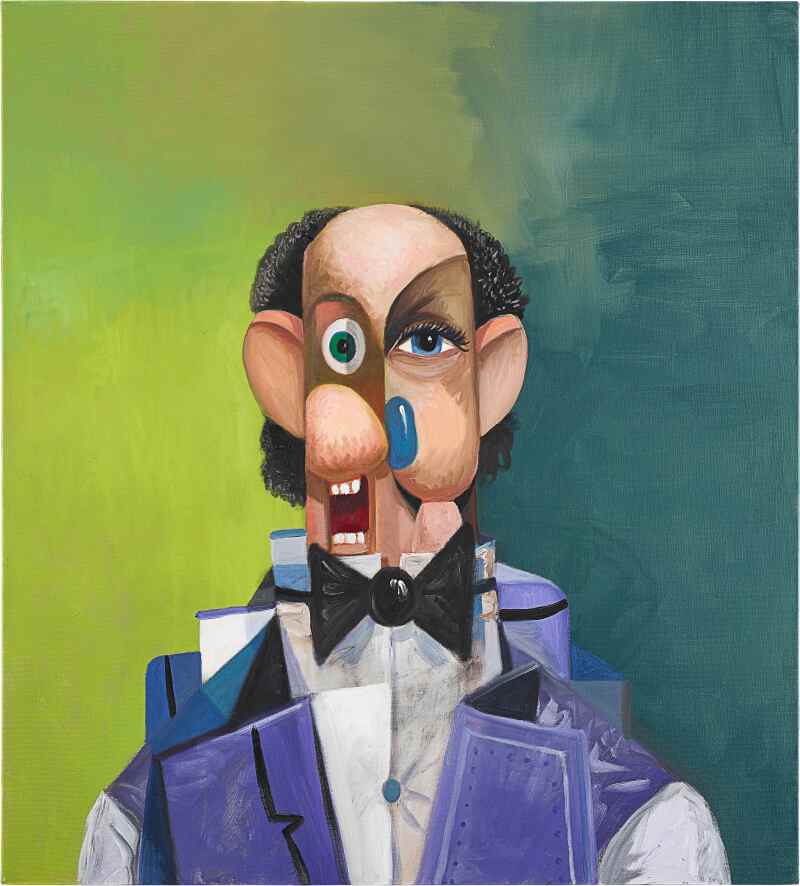 Private Collection, United Kingdom (acquired directly from the artist in 2008)

Humble yet endearing, meticulously detailed and an exacting composition, The Tailor is a masterful illustration of the artist’s celebrated Imaginary Portraits. The present work perfectly encapsulates George Condo’s concept of ‘artificial realism’. Defined as the realistic representation of that which is artificial, the principals of ‘artificial realism’ guide Condo’s construction of a motley crew of fictional characters whose imagined lives provide a fanciful recreation of our contemporary world. Condo’s inimitable figures serve as a mirror for our own human nature. Their embellished features contorting into expressions of pain, anger, and loss, that are both sympathetic and revolting encouraging the viewer to wonder at their own nature. Playfully grotesque and amusingly uncanny, Condo’s paintings allow the viewer to step beyond the borders of our aesthetic inclinations, forcing us to consider how we feel and experience our own humanity in front of the surreal reflections of his figures.

Short brushstrokes perfectly blended create the impressionistic awe inspired backdrop upon which our tailor appears. Glaring directly at the viewer, two different eyes meet our gaze. One blue, one green reflecting the shades of the background. Varying human emotions emit from each eye. The luscious eyelashes of the blue eye portray a feminine sense of serenity, while the circular green eye screams panic. Enhancing the emotional landscape of the figure’s face, drawn is a clownish blue nose, irregular cheeks and a gaping mouth with grimacing teeth. The irregularity of the facial features is in direct contrast with the congruity of the ears and hair and overall symmetry of the figure. The stark contrast from disorder to order lends the viewer to feel empathetic towards the disheveled tailor in his tattered suit despite his brut and uncanny appearance.

The facial features are reminiscent of Condo’s Pod characters, which reoccur throughout his oeuvre beginning in the 1990s into his Unedited Human Disaster series. Perfectly encapsulated by Simon Baker, “Condo's 'unedited human disasters' can be understood as channelling the artist's interest in the imaginary psychological and moral terrain of a whole host of characters, situations and emotional states that might plausibly be found in the real world, as seen through the warped lens of reworked memories of the history of art. But although in places the connections between reality and fantasy, however distorted or reconfigured, are still somehow evident, in others, the subjects are so extreme or perverse as to resist any kind of obvious symbolic explanation" (Simon Baker,George Condo: Painting Reconfigured, 2015, London, p. 254).