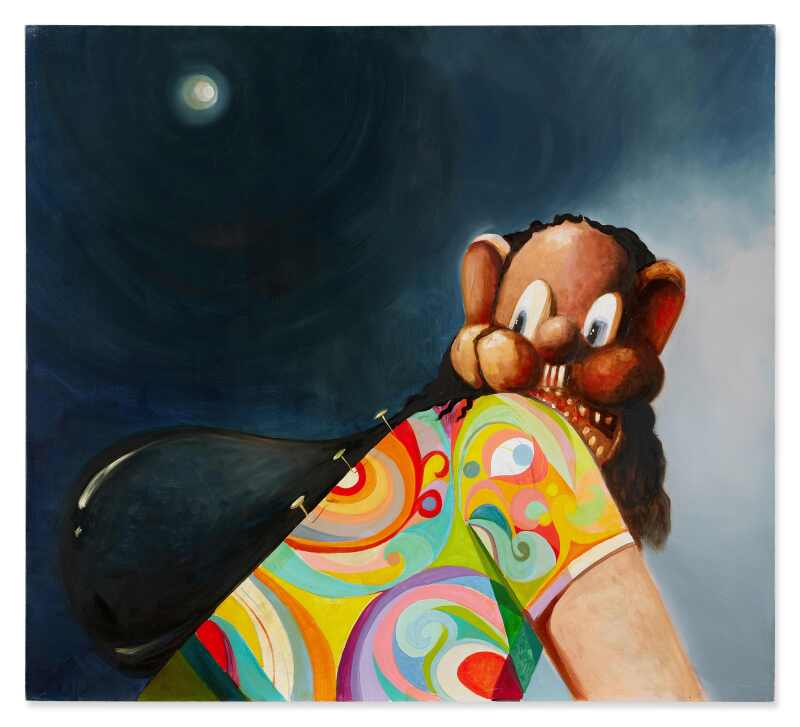 Private Collection, Athens (acquired from the above)

Private Collection, Asia (acquired from the above sale)

A monumental work that embodies the artist's career-long exploration of ‘artificial realism’, George Condo’s The Escaped Hippie stands as one of the strongest and most striking paintings within the artist’s Imaginary Portrait series. Endearing and grotesque, the central figure is a sublime example of the construction of fictional characters that render a fantastical reflection of our contemporary world. The characters flowing long hair and vibrant, psychedelic t-shirt puts the viewer at ease, reminiscent of an individual they may know personally or have seen in pop-culture. However, the alarmed expression and contorted features of The Escaped Hippie bears uncanny psychological complexity paired with the cartoon-like appearances that immediately challenges the viewer’s comfort. A testament to the artist's unique virtuosity and highly celebrated style, the figure represents shock through a lens that is simultaneously sympathetic and revolting, encouraging the viewer to wonder at their own contradictory nature.

By contrast to the figure’s stark presence, a subtle spotlight echoes outward painted with gentle and refined brushstrokes, demonstrating Condo's emphasis on the 18th Century Baroque depictions of portraiture and the pictorial plane. Condo embodies the dichotomy between past and present by frequently incorporating stylistic influences and formal qualities used by Old Master painters into his own work. The Escaped Hippie elicits a degree of grandeur, glowing against the deep blue background In traditional portraiture the figure is a willing sitter and the commissioned painter is tasked to conceal any physical or emotive flaws, depicting the sitter at their most prestigious.It is in the revelation of human emotion that Condo pulls the genre of portraiture out of the past and into the present. Here, the attempt to contain a free-spirited Hippie within the confines of traditional portraiture incites the Hippie into disarray, the precise moment Condo captures in the present work. The Hippie teeters between endearing and monstrous, challenging the viewer in evoking a degree of art historical charade.

As articulately summarized by curator Ralph Rugoff, “Over the past three decades, in canvases that articulate this kind of potent and mixed emotional charge, George Condo has explored the outer suburbs of acceptability while making pictures that, for all their outrageous humour, are deeply immersed in memories of European and American traditions of painting. Reworking outmoded pictorial techniques and styles in oil and varnish, he has fashioned a polyphonic terrain of cross-reference that ranges from the Renaissance to the Baroque, from Tex Avery cartoons to Cubism and Surrealism, Abstract Expressionism and Pop. Rather than being burdened by history, he seems liberated by it” (Ralph Rugoff, ‘The Mental States of America’ in: Exh. Cat., London, Hayward Gallery, George Condo: Mental States, 2011, p. 11).