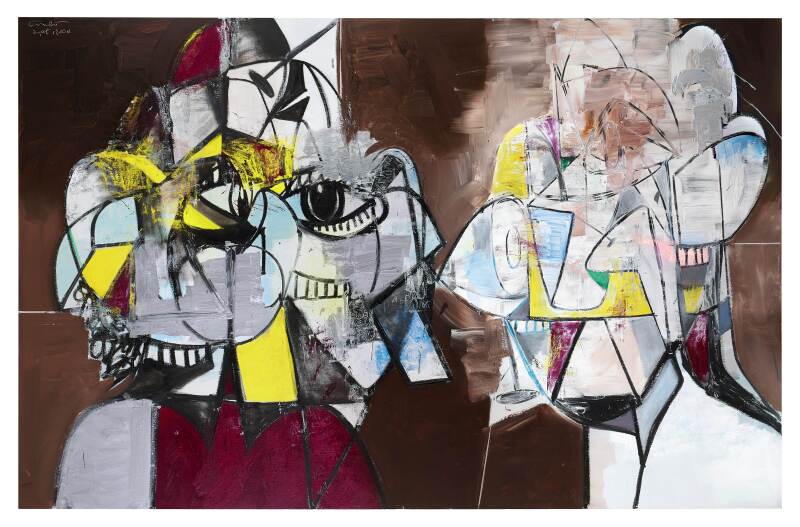 Private Collection, Palm Beach (acquired from the above)

Executed in 2016, Silver and Yellow Double Head Composition is a brilliant example of Condo’s trademark ‘psychological cubism’. A stark background lays-bare an optical puzzle of overlapping forms and lines; the work offers fragmented glimpses of ogling eyes and grinning teeth that clash and converge within the prodigious yet whimsical composition. An enormous range of human emotion is on display across the two figures; joy, terror, amusement, fury, and ecstasy collide in a chaotic yet elegant symphony that bridges the gap between an emotional state and a physical reality. Condo explains his development of ‘psychological cubism’, “Picasso painted a violin from four different perspectives at one moment. I do the same with psychological states. Four of them can occur simultaneously. Like glimpsing a bus with one passenger howling over a joke they’re hearing down the phone, someone else asleep, someone else crying - I’ll put them all in one face” (the artist quoted in: Stuart Jeffries, “George Condo: ‘I was delirious. Nearly died’”, The Guardian, February 10, 2014 (online)).

Set against a darkened backdrop of richly textured mahogany pigment, the present work recalls the work of Francis Bacon, whose subjects likewise appear anguished and contorted, dressed in a churchly maroon. In the foreground, Condo’s 9-month stint as the diamond duster in Andy Warhol’s infamous Factory is apparent in the usage of the metallic silver paint applied atop the surface as if using the methodology of screen printing. The right figure composed of abstracted, wide brushstrokes is undoubtfully reminiscent of the masters of Abstract Expressionism, like Willem de Kooning. Despite the many academic influences, the painting is quintessentially Condo. Ultimately, Silver and Yellow Double Head Composition is a masterful creation of multiple pictorial languages, resulting in Condo’s formation of his brand of psychologically charged portraiture. Describing his approach, the artist reveals: “I believe that painting needs to transform in order for it to become interesting for each and every generation, but I think of it more in terms of being liberated by history. Liberated by what has come before” (Exh. Cat., New York, Luhring Augustine, George Condo: Existential Portrait: Sculpture Drawings, Paintings 2005/2006, 2006, p. 7).

A testament to the innovative composition of Silver and Yellow Double Head Composition, a comparable double portrait, alike in monumental size, resides in the renowned collection of The Broad, Los Angeles. The Broad’s Double Heads on Red (2014) features two cubistically fractured busts marked with vibrant, colorful brushstrokes. The background of this prismatic and emotive portrait is an equally bold and powerfully deep red abstract scene. Evidence of Condo’s mastery of ‘psychological cubism’, Silver and Yellow Double Head Composition and Double Heads on Red although alike in composition and style, convey entirely different emotions and feelings. Once again, here in these examples, Condo’s masterful use of varying angles, color and human features awakens the viewer to historical memories, emotional states and personal recollections.