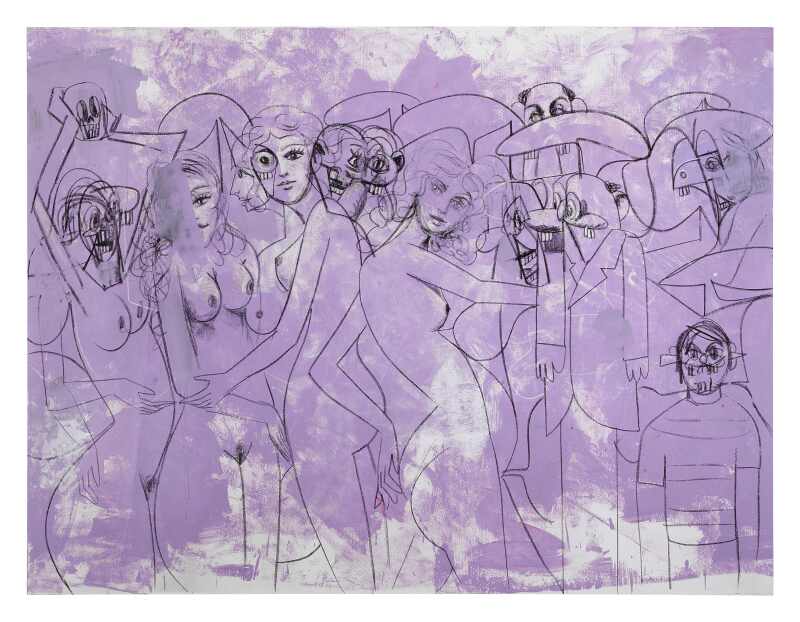 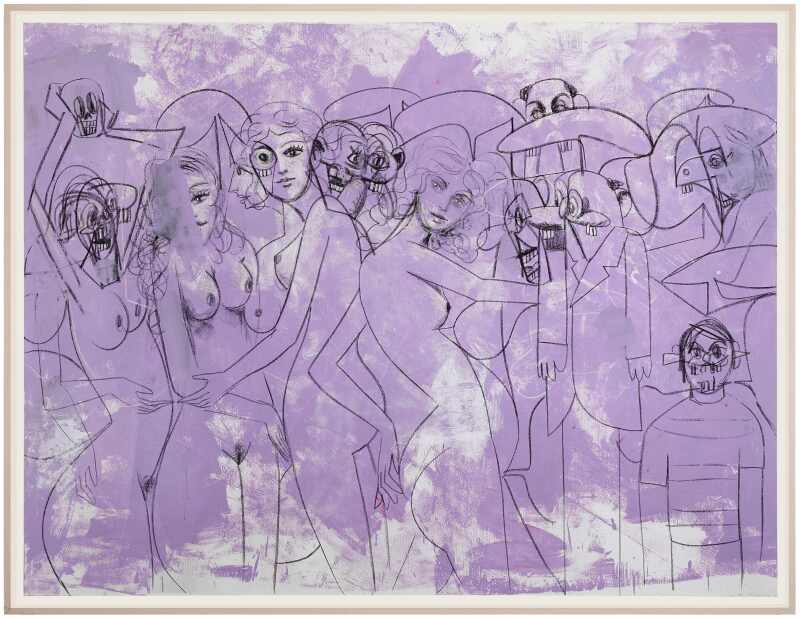 acrylic, oilstick and pastel on canvas

acrylic, oilstick and pastel on canvas

Broad, vibrant brushstrokes sweep across the canvas beneath seductive, graceful calligraphic gestures creating an alluring, yet ominous scene. Big Purple Composition wholly embodies the irrefutable beauty, conceptual gravitas, and unparalleled technical finesse characteristic of George Condo’s celebrated oeuvre. Executed in 2010, the present work is exemplary of the artist’s continued series of Drawing Paintings, which showcases Condo’s ability to aptly combined the traditionally separate processes of drawing and painting seamlessly into a fusion of fluid, gestural expression. In their celebratory synthesis of captivating imagery and spontaneous mark-making, the alluring beings of these paintings blur the boundary between figurative and non-representational painting with graceful ease. A masterwork in the artist’s signature mode, the seductive and chaotic imagery of Big Purple Composition showcases Condo’s improvisational genius and understanding of the human form.

On the left of the canvas, nude, seductive women promiscuously gaze outwards to meet the viewers eyes. Three captivating figures with voluminous hair allure the viewer inwards while a cast of strange characters bewilder and disrupt the pictorial scene. At first, the gaze of the alluring women is so enchanting one may miss the grotesque character in the lower right. This figure is Eddy, a reoccurring character who is found in a number of Condo’s Imaginary Portraits. The character of Eddy is depicted in a solo portrait titled Fast Eddy (2004) as well as in many group scenes throughout the 2000s. Condo’s repetition of character goes well beyond Eddy through his use of the Banker and perhaps most notably Rodrigo, the Butler. The inclusion of Eddy in a Drawing Painting is an innovative example showing the convergence of Condo’s painting and drawing practices within his oeuvre. In this lively canvas, Condo dissolves the distinction between drawing and painting and the traditional hierarchy perceived between the two, demonstrating that they both exist along the same continuum.

Spontaneous, yet precise and careful, the tempo at which Condo works is the ethos of his artistic method. As beautifully summarized by Simon Baker in George Condo: Painting Reconfigured, “The idea of uniting drawing and painting on a single canvas arose from Condo's recognition of the need for immediacy and improvisation with line and gesture but can also be understood as contingent upon the increasing importance of the contrapuntal balance of working at different speeds and rhythms on the same work” (Simon Baker, George Condo: Painting Reconfigured, London, 2015, p. 55).

In the present work, we see the co-influences of the dear friendship between Condo and Keith Haring. Just as Haring had infused his paintings with the beats and rhythms of 1980s hip-hop and dance culture, Condo infuses his works with various tempos and speeds. Condo has shared, “Music is such a huge part of my life, without it I don’t know if I'd ever have painted anything… My favorite thing is to put on a record in the studio and to still be painting without noticing the fact that the music has stopped playing for hours and is just running through my head” (Exh. Cat., Salzburg, Museum der Moderne, George Condo: 100 Women, 2005, p. 34). Although both bodies of work are imbued with rhythm, the goals of the artists are distinctly different. Haring sought to merge street art with high culture in a utopic union, whereas Condo chooses to depict the human consciousness and its fluctuating emotions. Hysteria, anger, lust, fear, sorrow and happiness are just a few of the many emotions layered within Big Purple Composition, an exemplary monochromatic illustration of Condo’s depiction of humanity within a Drawing Painting.