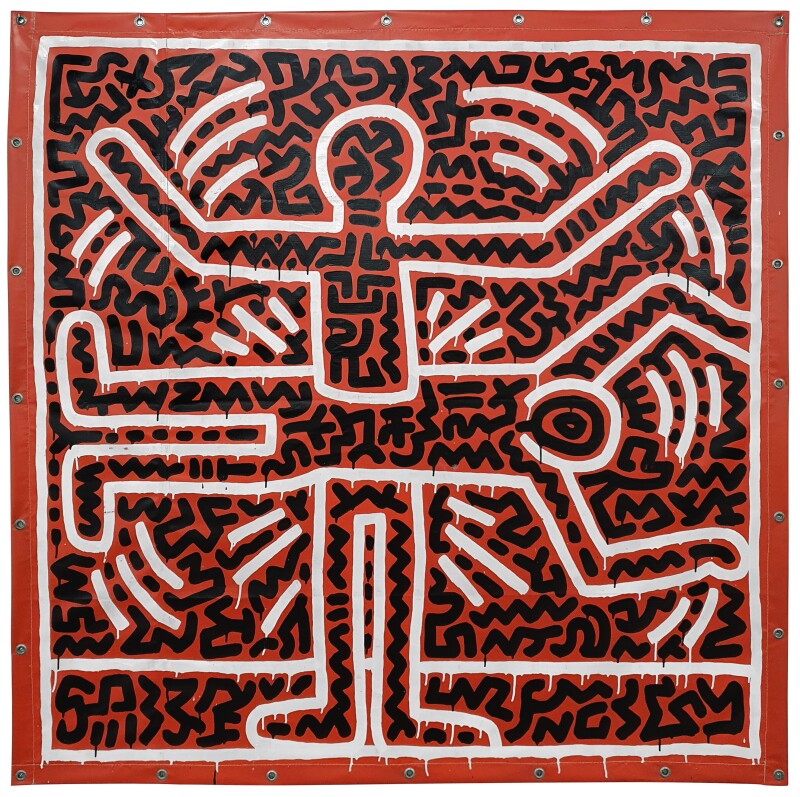 Private Collection, Venice (acquired from the above)

Exemplary of Keith Haring’s seminal works on tarpaulin, Untitled is demonstrative of his powerful symbolism through simplified imagery and its lasting universal appeal. Haring’s formative and enduring inspiration on the streets of New York translated into his use of unexpected and unprecedented space and materials to convey his pictorial messages. Even once Haring became famous internationally, he would not abandon his profound interest in street culture and the artistic movement that was born from it in downtown New York in the early 1980s.

Just as Haring found himself magnetized to the idea of scrawling his figures and creatures across the walls of the subway tunnels of New York, his tarp series was similarly derived from a chance encounter above-ground. As Haring later recalled:

“One day, I observed some Con Edison men working on the street, and they were covering their equipment with these vinyl tarpaulins, which had these little metal grommets in them…I go to this place by subway…and they show me all these many-colored tarpaulins—and they can make them up to size—and I order a whole batch of them, and I tell them how to space the grommets. I then investigate which medium will bite into the surfaces, and discover it has to be a kind of silk-screening ink that’s made for plastic…The tarps I order are mostly yellow and bright red” (the artist in: John Gruen, Keith Haring: The Authorized Biography, New York, 1991, p. 85).

This chance revelation led to the works now considered to be Haring’s masterpieces. Unpretentious in their fabrication, the tarpaulin works harnessed the grit and creative potential of the street and flouted the limitations and historical connotations of painting on canvas. The tarpaulin paintings provided art that was accessible to the masses in both its visual language and its conceptualization, a mission which Haring actively sought in his creative process throughout the course of his life.

Two figures intersect at a central point in Untitled creating an image open to limitless interpretation. This figurative image was a recurring variation of a motif used throughout Haring’s career: the intersecting figures had appeared earlier in Haring’s subway drawings and the artist continued to illustrate varied arrangements of the human body in throughout countless works thereafter. The particular figurative arrangement of Untitled vaguely insinuates a reinterpretation of Leonardo da Vinci’s Vitruvian Man, a representation of the human body as a manifestation of the natural perfection of the cosmos. Haring’s conscious reference of iconic and ubiquitous symbols channeled his desire to create art that transcended time and permeated global culture through universal signifiers. Haring’s overarching artistic intention “was an attempt at the deconstruction of objectivity in the name of the subjectivity of the observer…Rather it is the observer who becomes an artist, in the sense that he or she must find his or her own unique way towards understanding” (Gianni Mercurio, Ed., The Keith Haring Show, Milan, 2005, p. 26). Untitled is a manifestation of Haring’s command of universal symbolism and his versatility as an artist who created art to connect with others.