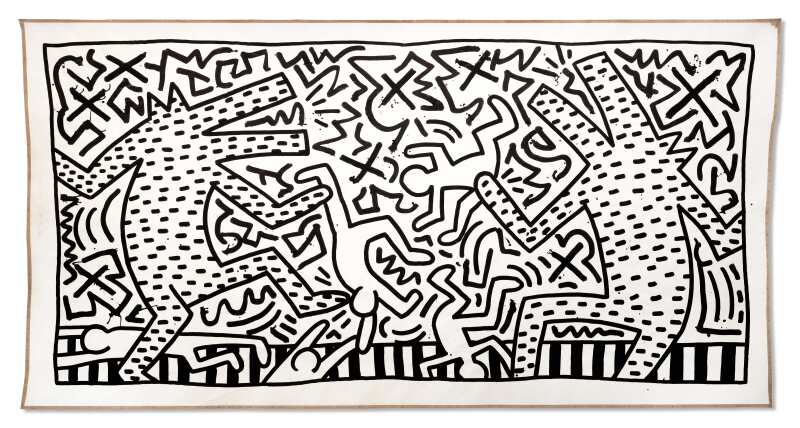 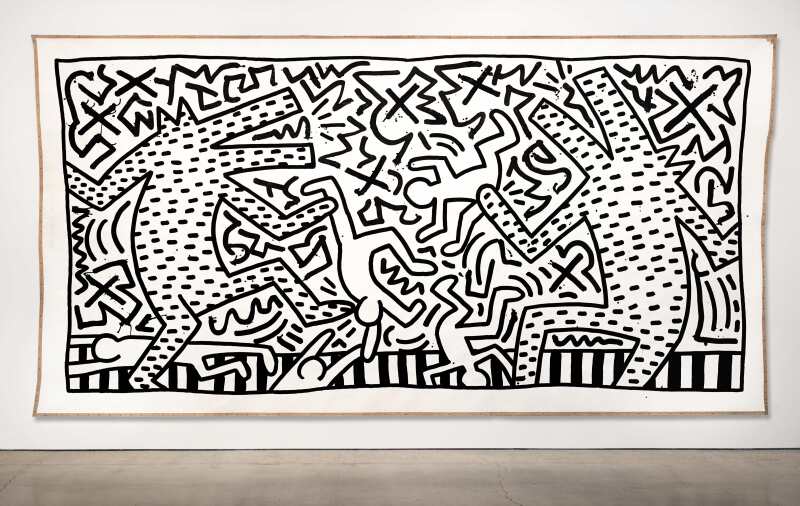 Private Collection, Switzerland (acquired from the above in 2004)

Acquired by the present owner from the above in 2013

Created in September 1982 when Keith Haring was only 24 years old, Untitled represents the moment in time when Haring’s foundational influence from the streets of New York catapulted him into the public eye of the art world, and subsequently into international stardom. Haring’s formative practice began with the proliferation of his first and ultimately his most iconic symbols: the dog and the baby. Haring’s preoccupation with tagging his distinctive personal symbols reached a fever pitch when he adopted subway ad spaces covered with blank black paper as his public canvases in late 1980. Haring’s subway drawings thrust his signs, symbols and the legend of his artistry into the public eye and the burgeoning graffiti scene in downtown New York that quickly captivated the attention of the formal art world. Untitled is emblematic of Haring’s practice deeply rooted in drawing and his desire to fill space with iconographic images in a way that united his inspiration directly with his artistic vision.

Before Haring began scrawling his barking dogs, radiant babies, faceless figures and UFOs in the caverns of New York’s subways in 1980, he was enticed to create drawings that covered the spaces they inhabited. In the spring of 1980, prior to leaving the School of Visual Arts (SVA), Haring submitted a proposal for his work to be featured at an alternative artist’s space at P.S. 122, a public school in the East Village. Haring’s proposal was accepted and his installation idea evolved into a series of drawings installed floor-to-ceiling in the exhibition space, which marked his early inclination to public, individual and exhibition-specific works of scale and his insatiable predilection for sprawling, all-over compositions. Not long after the opening of the P.S. 122 exhibition and Haring’s departure from SVA, he was enticed to join the scene of graffiti artists in the Village leaving their tags above-ground with Magic Marker. In his authorized biography, Haring recalls: “So my tag was an animal, which started to look more and more like a dog…I was using these images, always bearing in mind the Burroughs/Gysin cut-up ideas” (the artist quoted in: John Gruen, Keith Haring: The Authorized Biography, New York, 1991, p. 65). The cut-up ideas Haring referenced allude to William S. Burroughs and Brion Gysin’s ‘cut-ups’, or their collaborative rearrangement, appropriation and juxtaposition of their own text and images, or those of others, into inventive and spontaneous new arrangements—a process indebted to the practices of the Dadaists and Surrealists of the early 20th Century. Haring’s reinvention of simplistic, often primitive symbols in the context of contemporary popular culture directly positioned within the chaos of urban life was his interpretation and intervention of the Burroughs/Gysin method. The dog became one of Haring’s most prolific and identifiable symbols, taking on a multitude of meanings—from allusions to ancient deities, to contemporary political antagonists to Haring’s unrelenting consideration of mortality, his icons could be reconfigured and repurposed endlessly to embody new perception.

Haring’s dogs reappeared beyond his early marker tags on the streets of New York to his subway drawings and then throughout his entire body of work thereafter. While Haring chose Tony Shafrazi as his gallery representation in early 1982, he continued his subway drawings and other public endeavors. Completed in September 1982, a month before his first solo exhibition with Shafrazi in October of that year, Untitled records the artist’s progressive and ambitious projection of his idiosyncratic energetic lines and commanding symbolism from the street to the exhibition space. Impressive in scale, Untitled reflects Haring’s proclivity to create images that were larger than life itself. Two imposing and subtly menacing dogs dance like towering ancient deities in a frenzied, hedonistic ritual. In an essay originally included in the exhibition catalogue published for Haring’s 1982 exhibition at Tony Shafrazi Gallery, Jeffrey Deitch described the role of Haring’s street iconography: “They diagram the collective unconscious of a city—a city that moves along happily enough, but just barely enough to keep from degenerating into the dog-eat-dog, topsy-turvy world of Haring’s images…We can still frolic around like Haring’s little babies, but the barking of the dogs becomes louder and louder” (Jeffrey Deitch, “Why Are the Dogs Always Barking,” Keith Haring, New York, 2008, pp. 220-221). Using Deitch’s words, Haring’s dancing dogs and free-falling men in Untitled are “sketches for Armageddon—drawings bubbling with unrestrained eroticism and spinning with signs of destruction,” just as the increasingly subversive imagery of Haring’s public-facing subway drawings (Ibid., p. 218). Haring’s universe of barking dogs and their relation to human figures was often a metaphor for the tumultuous state of society as a whole, and particularly of the streets of Manhattan in the 1980s. The dogs were at once just as much imagined, occult beasts as they were emblems of systems of oppression that inflamed societal inequity and injustice. Haring’s interest in and use of ancient symbols, images and icons cannot be divorced from his canine drawings: the ancient Egyptian god Anubis, a hybrid jackal or wild dog and man, is known as the shepherd or caretaker of the dead to the afterlife. In contemporaneous context, AIDS had already infiltrated the collective psyche and began to spread among queer communities the year prior in 1981, but transparency and clarity of the disease’s scope and any decisive government action was still lagging, at best. With this in mind, one can imagine the two dog-gods as harbingers of mortality bearing witness to the anxious onslaught of what might have felt like the apocalypse of life as Haring knew it in 1982, with men figuratively falling into perilous uncertainty.

Throughout the duration of his brief but iconic career, Haring re-imagined historic and popular symbols into his own artistic lexicon. Haring’s images, particularly his dogs, endure as lasting emblems of the artist’s ingenuity and ability to connect with society at large through the use of his symbols as a universal language.