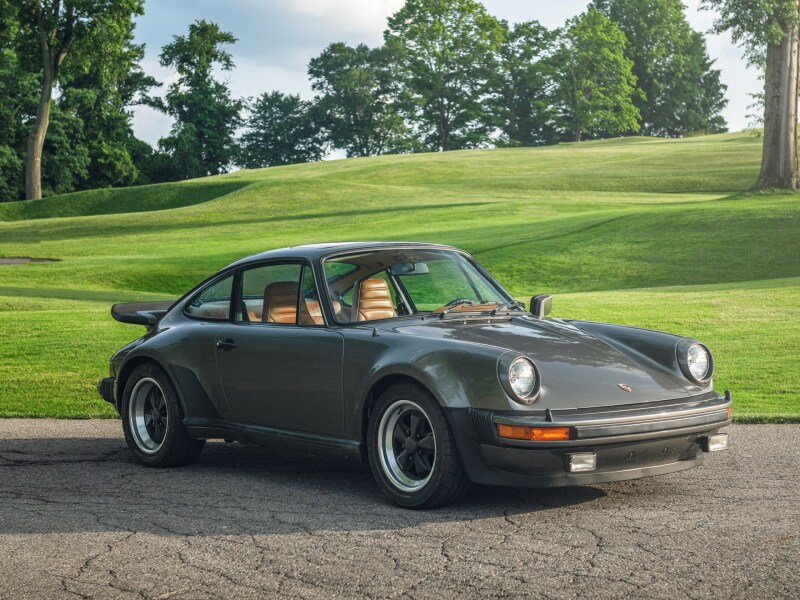 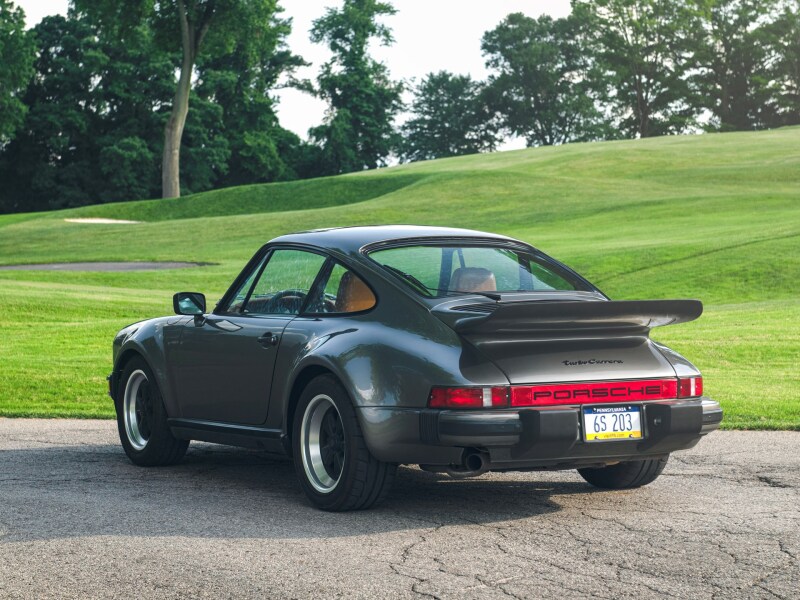 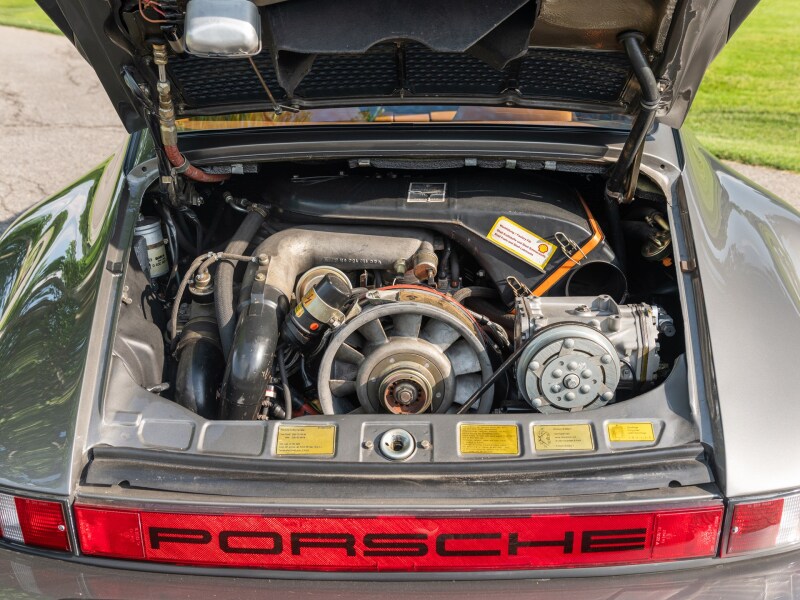 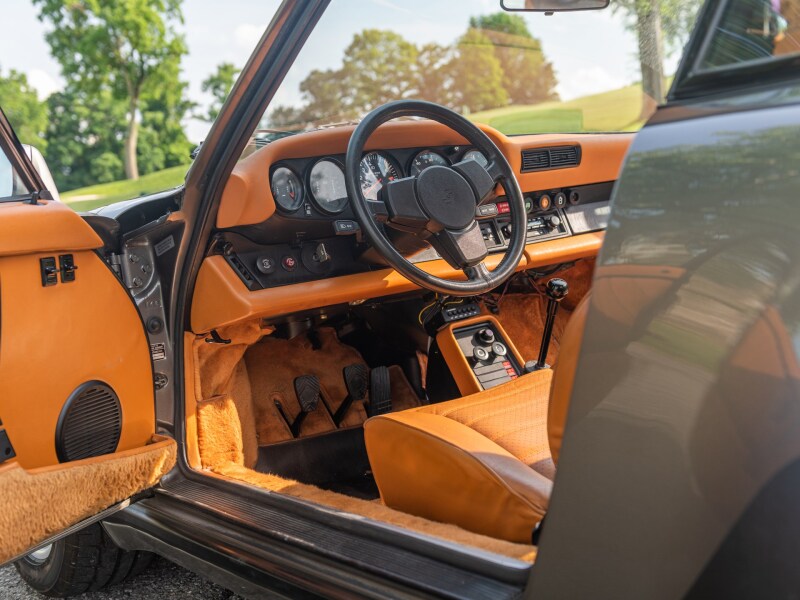 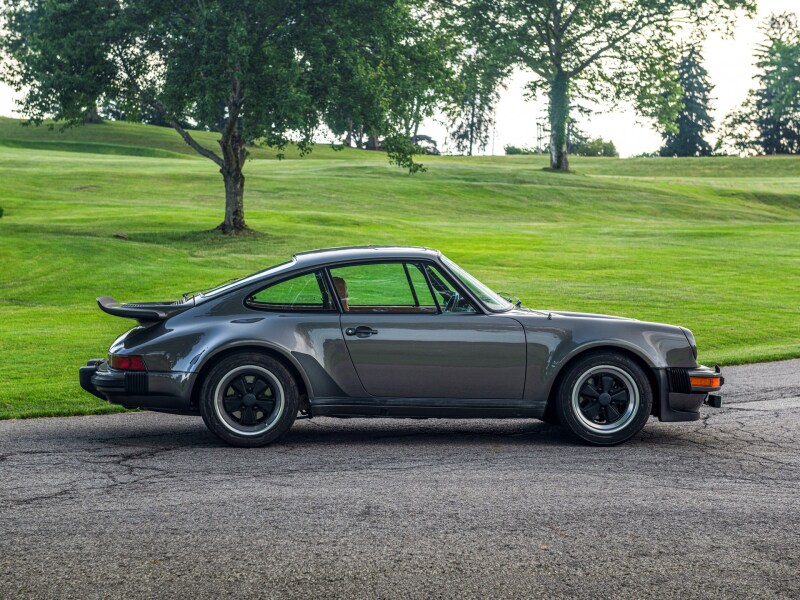 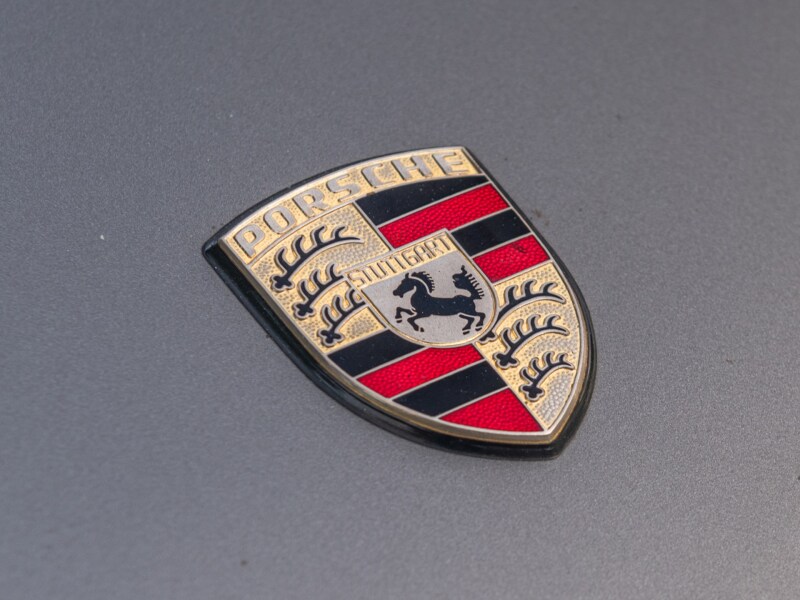 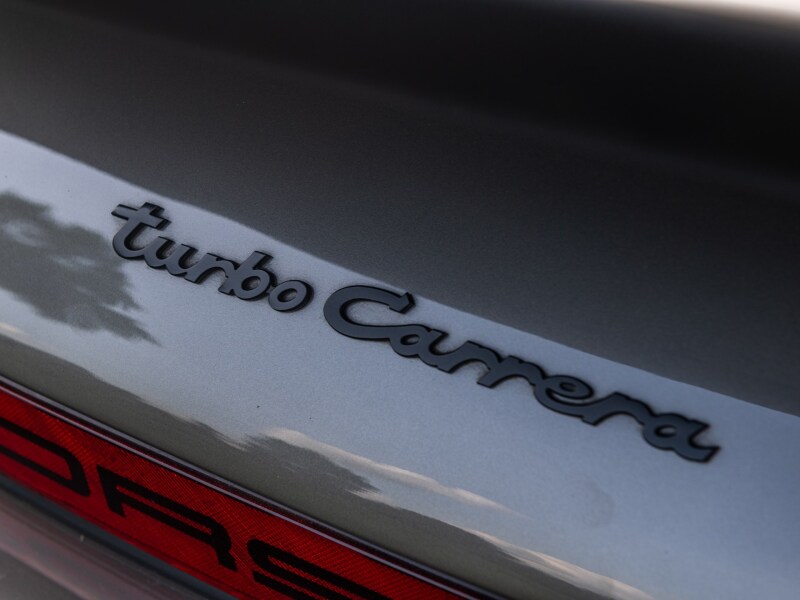 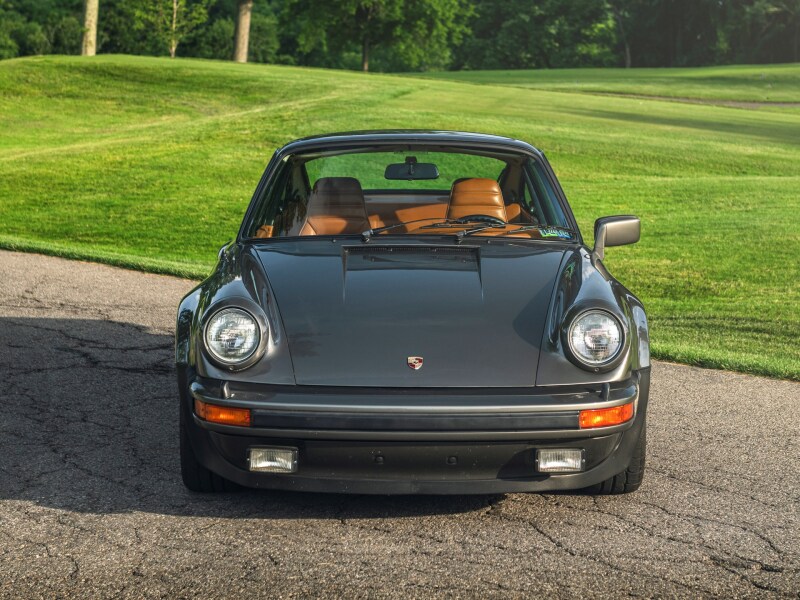 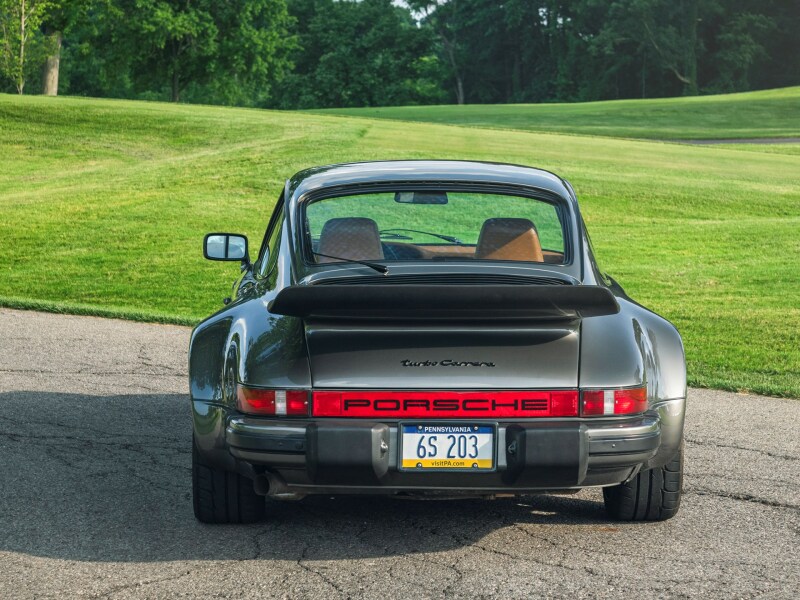 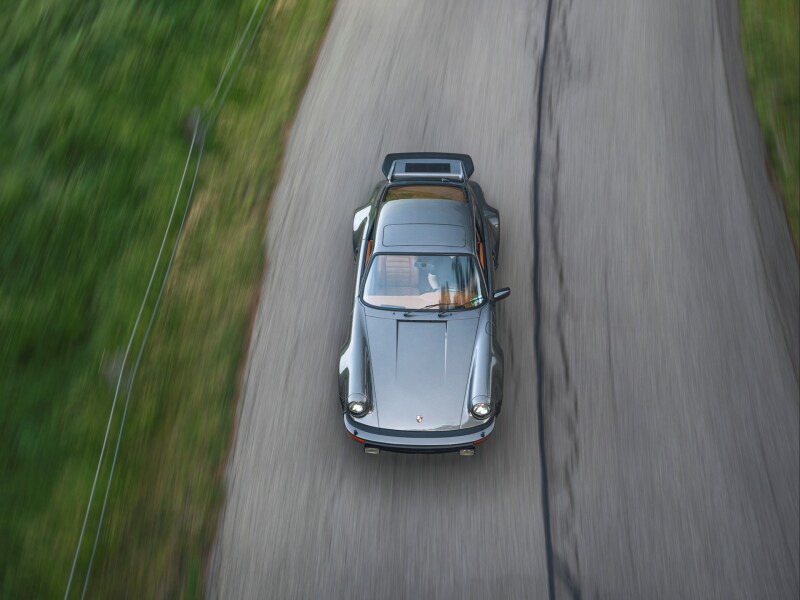 • A thrilling 3.0-liter example of Porsche’s pivotal 930 Turbo with known provenance and only three owners from new

• Retains numbers-matching engine and gearbox per accompanying Porsche Certificate of Authenticity; driven just over 39,000 miles at time of cataloguing

• 2017 Porsche Club of America Parade participant and featured in Panorama magazine, a copy of which accompanies the sale

When the Porsche 911 Turbo Carrera was introduced in 1974—with production beginning in 1975, followed by US deliveries in 1976—it represented something new from the German automaker: Its first true production supercar. Although it was immediately identifiable as a 911, the Type 930, as it was internally designated, featured a 3.0-liter flat-six boasting a single KKK turbocharger with K-Jetronic fuel injection. Output was, at 245 horsepower for US-market cars (260 horsepower elsewhere), immense; weighing less than 2,700 pounds, the 930 could sprint to 60 mph in just over five seconds and easily top 150 mph.

The Turbo quickly name became synonymous with high performance, albeit performance that demanded the talents of an experienced driver: This was a wickedly fast car that could easily punish those who did not approach it with skill and respect. Of course, this only added to its appeal.

Although the 930 served as the homologation basis for Porsche’s fearsome 934 racer, it was no stripped-down track weapon. Turbos were luxuriously equipped, with a long list of standard equipment, including air-conditioning, full leather, rear wiper, headlamp washers, and a stereo. Further options, including a power sunroof, were offered as well; that feature is found on this 1977 chassis, which also benefitted from an improved brake boost system introduced for the model’s second year.

This 1977 911 Turbo is one of 2,819 3.0-liter models produced between 1975 and 1977. While its accompanying Porsche Certificate of Authenticity lists its exterior color as simply “Metallic Paint to Sample,” the car’s first owner, John Price of Santa Barbara, California, was clearly looking to Munich for inspiration: The exterior hue is in fact BMW Anthracite Metallic, a subtle but attractive choice that pairs beautifully with the car’s Cork leather interior. In addition to the aforementioned sunroof, Pirelli P7 tires were also specified.

Price, a real estate developer who would go on to serve as US Ambassador to Mauritius and Seychelles from 2002–2005, took delivery of his Porsche through Trans-World Porsche Audi of Goleta, California. Its original Monroney label, which accompanies the sale, indicates a total retail price of $29,624.50. Price would enjoy the car for some 36 years, accumulating just under 35,000 miles in the process. Sometime before he parted with the Porsche, it was refinished in its factory-correct BMW Anthracite Metallic. Its original Cork interior, however, was wisely retained.

After Price’s long-term custodianship, the Porsche passed to a particularly suitable second owner in 2013: Ryan Snodgrass of Kirkland, Washington, author of Turbo 3.0: Porsche’s First Turbocharged Supercar. Several months before Snodgrass’ acquisition, Price had revived the car after a period of storage, with Strong Porsche of Salt Lake City, Utah replacing the fuel distributor and performing further fuel system work, as well as an oil change. Snodgrass continued to refine the car after his purchase, with invoices on file indicating distributor service, bushing replacement, alignment work, replacement of the rear shock absorbers, as well as careful attention paid to even the smallest cosmetic details.

It was subsequently featured in Snodgrass’ tome on the benchmark model, as well as in Panorama magazine; a copy of this very collectable book—numbered 417 to match this car’s chassis number—as well as the relevant issue of Panorama, accompany the sale. In 2017, this car participated in the 2017 Porsche Club of America Parade in Spokane, Washington; it would no doubt be welcomed at any number of further club events, rallies, and tours, should its next owner desire.

Acquired by the consignor later in 2017, this Porsche has continued to enjoy scrupulous care; invoices from his ownership show a history of routine maintenance and as-needed repair and improvement carried out by George Riggin Specialty Auto of Harmony, Pennsylvania. Tasks performed range from regular oil changes and tune-ups to electrical system work, adjustment of shifter and pedal mechanisms, and air conditioning maintenance—all to ensure that the car performed at the level one expects from a classic Porsche. Cosmetics were also addressed as needed, including a re-covering of the car’s dashboard top in proper Walk Nappa leather; the interior remains in otherwise highly original condition. Additionally, a Swepco LabTec lubricant analysis report on file, dated May 2018, indicates that the car’s signature turbocharged engine is operating within healthy parameters.

Since the era of the 930, the Porsche 911 Turbo models that have followed have only grown more powerful and ever faster. Yet there is something undeniably special about the first of the breed, standing tall with its game-changing combination of raw power, analog tractability, and carefully considered luxury features wrapped in that aggressive-yet-timeless Porsche styling.

Now showing just over 39,000 miles at cataloguing, this carefully preserved and well-documented 1977 example, with its numbers-matching engine and gearbox, notable and known provenance from new, and distinctive color combination, offers you an exciting opportunity to experience the unforgettable start of the Turbo legend firsthand.