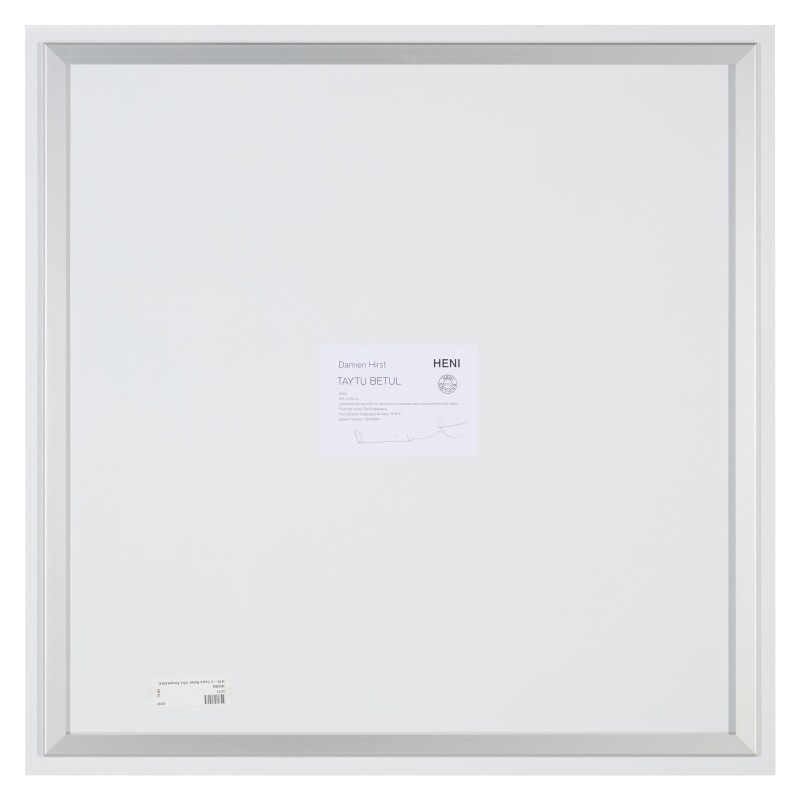 "The Empresses" (H-10, 2022) marks a new iteration in Damien Hirst’s exploration of the butterfly as a symbol for freedom, religion, life and death. Part of a series of five laminated giclée prints on aluminum composite, screen-printed with glitter, each print depicts images of red and black butterfly wings, arranged into a unique kaleidoscope-like pattern. The carefully positioned wings appear mobile and their patterns transform, each print seeming to capture the butterflies in moments of variously directional flight.

A composition that is infused with an exhilarating sense of speed and movement, "Taytu Betul" is named after the fierce empress of Ethiopia. Upon her marriage to Emperor Menelik in 1889, Taytu Betul (c. 1851–1918) became Empress of Ethiopia. She was anything but a passive ruler, unequivocally resistant to imperialism and staunchly opposed to any negotiations that would result in a loss of Ethiopian territory. During her reign, Taytu Betul also founded Addis Ababa, which remains Ethiopia’s capital city today.

"Taytu Betul" immediately draws the eye to the red and black pairs of wings that form the basis of the composition: the spiral. It begins at the center of the work and moves outward, apparently past the picture plane. The momentum that develops as this composition progresses echoes the passion and physical dedication of Taytu Betul, who was at the head of her army as they went to war to defend their borders. These wings are complemented by additional arrangements of variously sized, colored and patterned wings, which form a sort of secondary backdrop to the central action of the work.

"Taytu Betul" stands out from the series for its vigorous attempt to capture the butterflies in their true living form. With the composition resembling an aerial view, the print allows viewers to look downward as the momentum of this pack of butterflies is captured in the spiral and dynamic development of the composition.