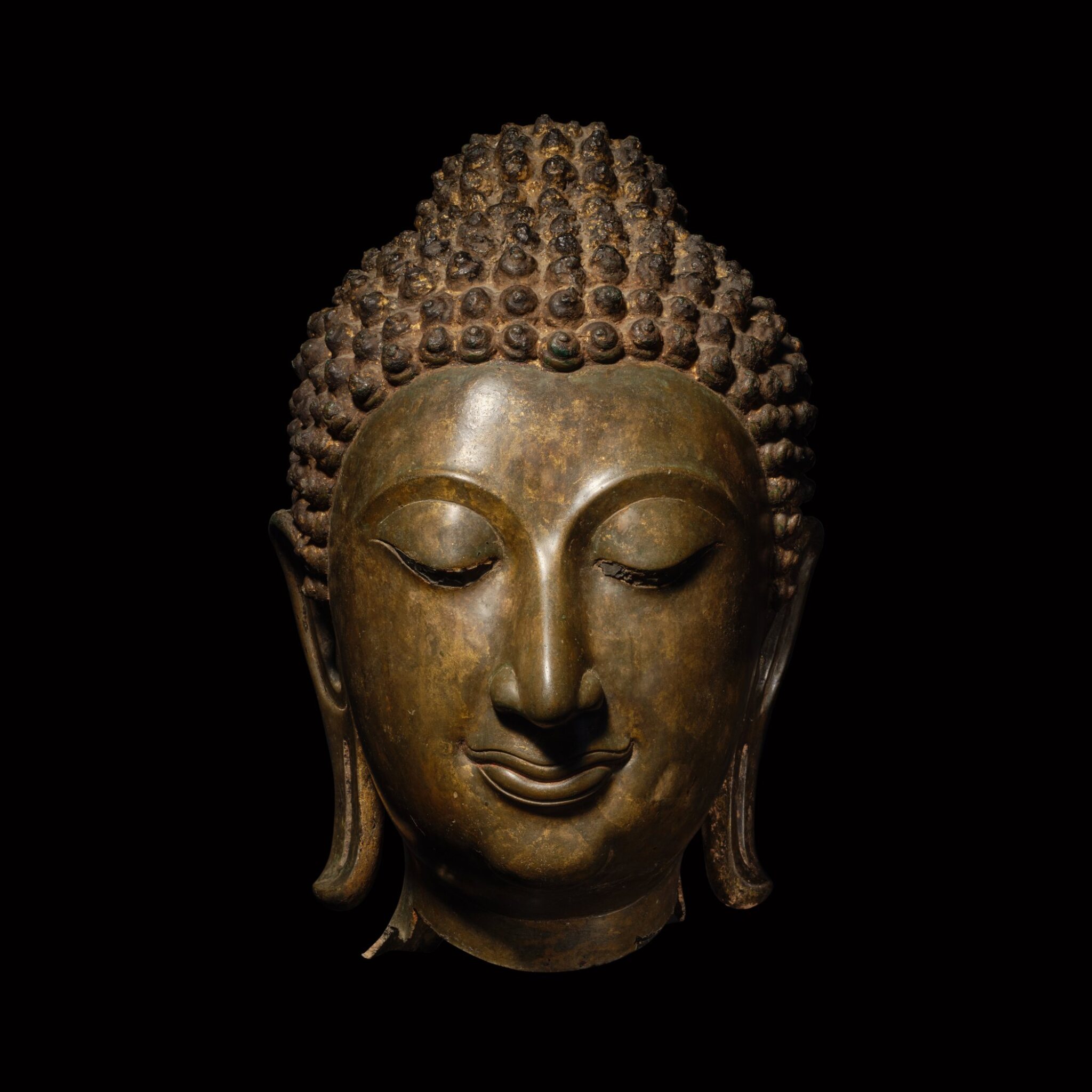 The head is preserved in very good condition with extensive traces of the original gilding. The tip of the ushnisha is missing. Minor bruising to the tips of the hair, and other general surface wear. Some abrasive areas at the neck.

Please note that the dating of the head is consistent with the results of a thermoluminescence test, Oxford University, 30th June 1983, sample no. 381g78.

This sublime representation of Shakyamuni Buddha is of truly monumental proportions, larger than any other example recorded in any private collection, but is still cast with the sensitivity and precision to convey the benign and deeply spiritual expression on the face of the enlightened one. His downcast eyes are recessed for inlay with lacquer and possibly mother-of-pearl, and accentuated by elegantly arched eyebrows in relief. His enigmatic smile is achieved with delicately outlined lips gently upturned at the corners. The hair is arranged in rows of snail-shell curls that also cover his dome-shaped ushnisha, one of the physical signs (lakshana) of Buddha’s supernal nature. The top of the ushnisha is recessed, formerly allowing for the insertion of a flaming finial.

It is difficult to conceive just how massive the entire sculpture to which this monumental head originally belonged would have been. Few works of comparable size have survived, and this magnificent head appears to be the largest in private hands. However, two examples currently in museums should be mentioned. The first is in the Ackland Art Museum in Chapel Hill, North Carolina (#91.2), and the second is in the permanent collection of the National Museum, Bangkok, though its sharper features suggest a slightly later date (see J. Boisselier, The Heritage of Thai Sculpture, New York, 1975, no. 12, pp. 31 and 222). As can be seen in these two pieces and the present example, Thai artisans were highly skilled at bronze casting and capable of producing monumental figures in seated, standing, and even walking postures.

Buddhist art produced during the Sukhothai Kingdom (1238-1438) of North-Central Thailand displays a remarkably cohesive style. During this "Golden Age" of Thai art, the kingdom's Theravada affiliation inspired the production of serene Buddha figures. The faces are characterized by an oblong shape with full cheeks and ears flared slightly at the tips, and the heavy-lidded eyes angle slightly towards the nose to reinforce the interior nature of the gaze. Although it lasted only two centuries, the Sukhothai Kingdom gave birth to a school of art in Thailand that is considered comparable to that of the Gupta Dynasty in India in terms of both artistry and influence. The Sukothai kingdom lasted for just two centuries but was an extremely wealthy and powerful period in the history of Thailand. Artists produced some of the most sophisticated and original sculpture found in Thailand. They were the first to depict the Buddha in four different attitudes: standing; seated; walking and reclining, and the influence from this period can be seen in Thai sculpture throughout subsequent centuries. Religious texts prescribed strict definitions as to how the Buddha should be depicted and these rules were firmly adhered to while maintaining a fluidity of line and creating an additional element characterized as ‘fiery energy’.

See two smaller Thai copper alloy heads of Shakyamuni Buddha, one in the Metropolitan Museum of Art, New York, 1981.458, gift of Mr and Mrs Nathan L. Halpern, and another formerly in the collection of Mr. Pila, Plenipotentiary Minister of France to the Kingdom of Siam, sold at Bonhams Paris, 25th October 2022, lot 83, from the collection of Robert and Jean-Pierre Rousset.