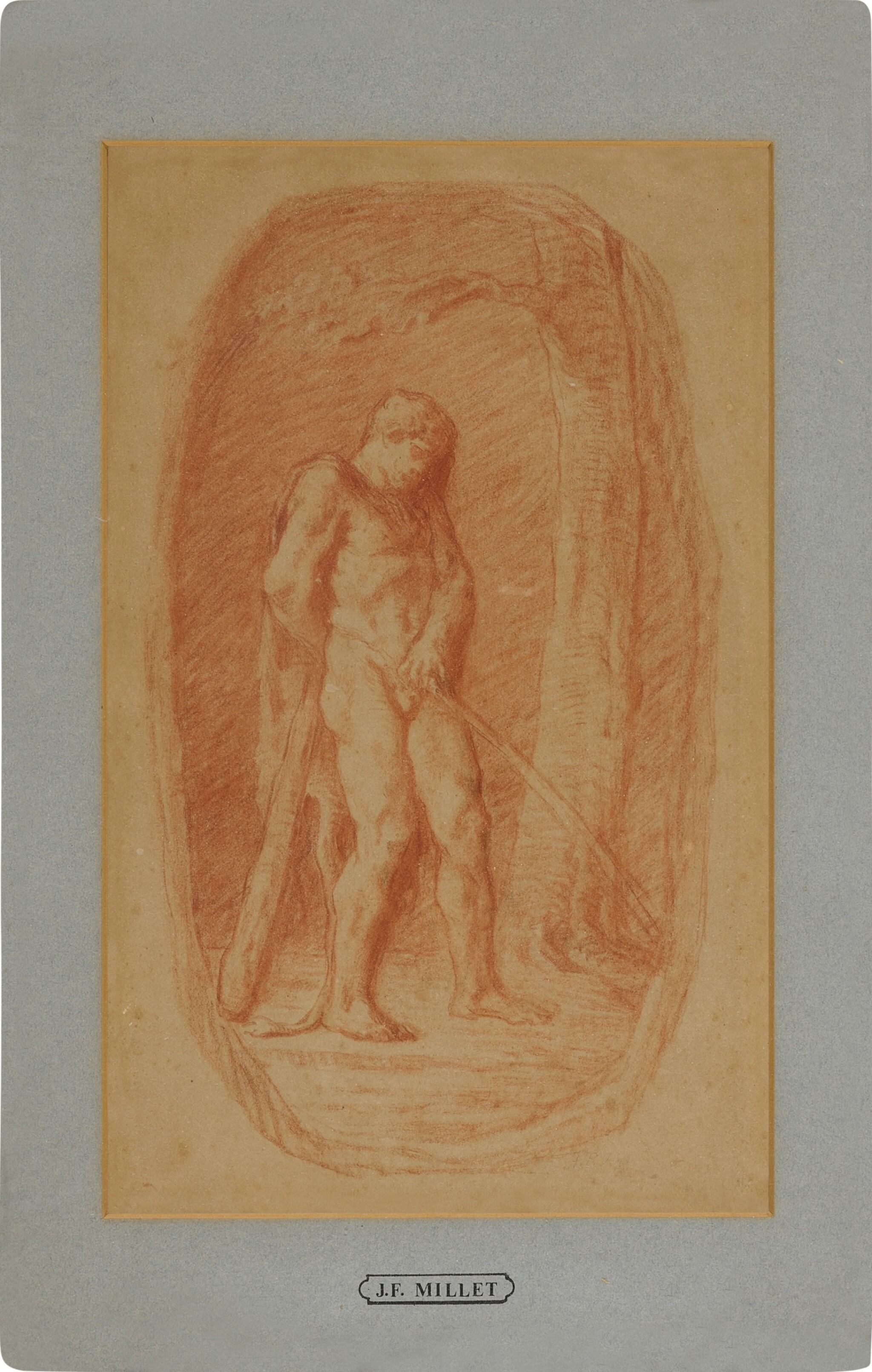 The sheet is hinged at the upper edge. Significant mat burn at all edges, particularly left, right, and upper. Several spots of foxing and surface dirt throughout.
In response to your inquiry, we are pleased to provide you with a general report of the condition of the property described above. Since we are not professional conservators or restorers, we urge you to consult with a restorer or conservator of your choice who will be better able to provide a detailed, professional report. Prospective buyers should inspect each lot to satisfy themselves as to condition and must understand that any statement made by Sotheby's is merely a subjective qualified opinion.
NOTWITHSTANDING THIS REPORT OR ANY DISCUSSIONS CONCERNING CONDITION OF A LOT, ALL LOTS ARE OFFERED AND SOLD "AS IS" IN ACCORDANCE WITH THE CONDITIONS OF SALE PRINTED IN THE CATALOGUE.
With the family of the artist at the time of his widow's death, 1894
Sale: Kunsthalle, Basel, 24 January 1970, lot 65
Private collection, Paris
Sale: Christie's, London, 25 May 1994, lot 186
Composed as a shallow bas-relief, in an oval presentation that recalls antique cameos or Renaissance medallions. This drawing of a powerful young man is an unusual work in Millet's oeuvre. Hercules was probably created during the second half of the 1840s, when the artist was trying to merge his academic training and personal vision into a distinctive style. The drawing's surprising subject and distinctive format, combined with the rugged, unidealized figure of Hercules himself, provide an important reminder of how complex was both Millet's career and the era in which he worked. The heavy club and the lion skin tied around the shoulders of this muscular young man are the unmistakable attributes of the Greek hero Herakles (or Hercules). Millet's choice of a distinctly human pose for Hercules (whose extraordinary strength and tenacity of purpose earned him a place on Mount Olympus) may reflect an antique drama, where Hercules was often presented as a kind of comic everyman. Or the choice may simply follow the artist's personal preference for a more earthly theme. Although we seldom associate Millet with mythological subject matter, he was exceptionally well-read and an admirer of the great poets of both ancient Greece and Rome--as well a a former student of the Ecole des Beaux Arts, which strongly promoted the classic authors as suitable sources for inspiring pictures. At several points throughout a career known for its commitment to realism, Millet turned to classical writers for inspiration. The most striking aspect of the drawing is the artist's strongly sculptural rendering of Hercules, whose powerful body is so solidly defined against the shallow background. Although the simple tree trunk with its single overarching branch and the narrow frame are deliberately reminiscent of ancient intaglio gems or cameos, Millet's emphasis on the angular rendering of the hero's stout body distinguishes the drawing from any classical source that might have inspired the work. One other drawing in a similar oval setting, Two Lovers (AIC) is known, and recently two small sketches for other cameo-like figure compositions have come to light, suggesting that Millet might have been planning a series of such drawings, perhaps as book illustrations, a type of project that attracted attention again much later in his life.

We are grateful to Alexandra Murphy for her assistance in preparing this catalogue entry.