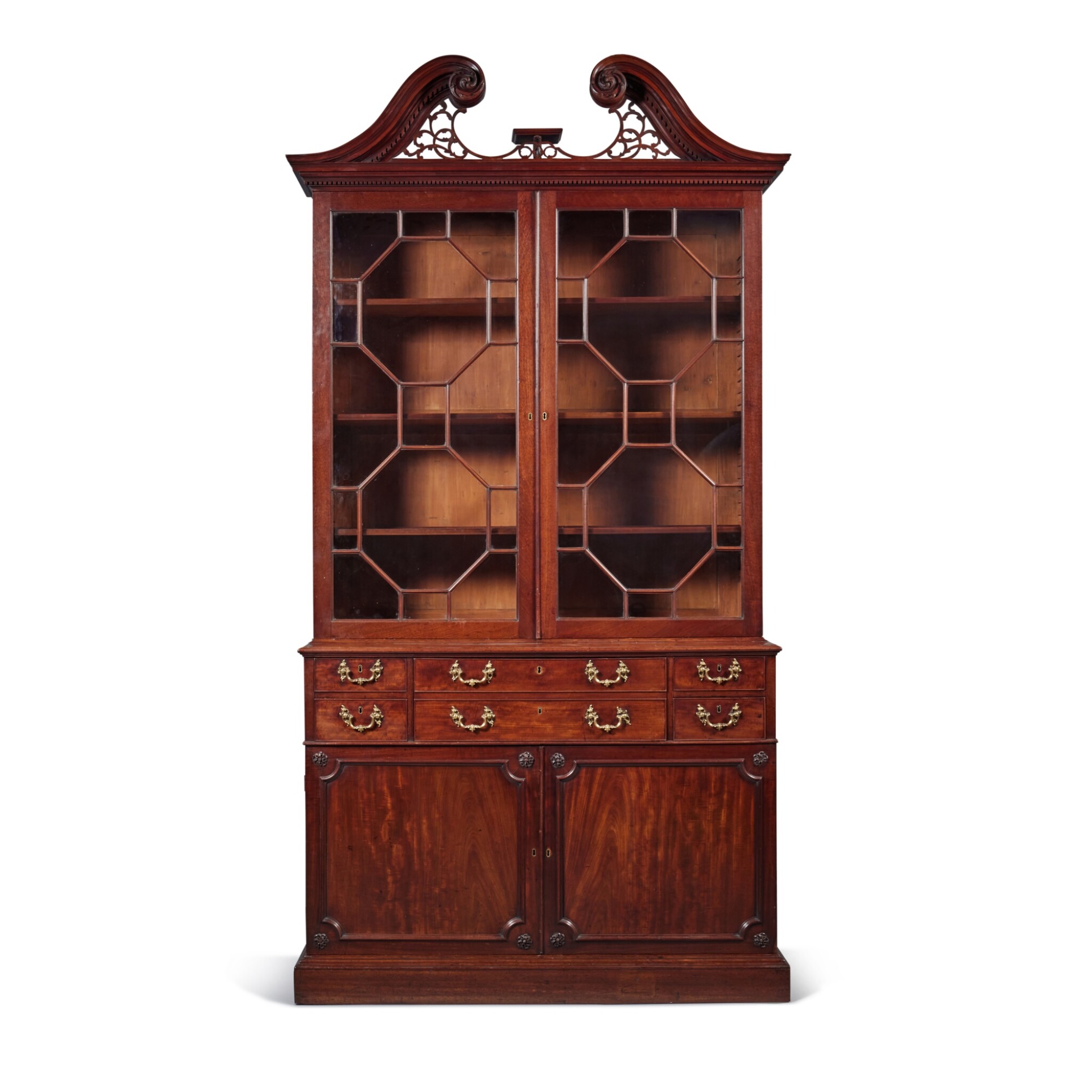 In good restored condition, with the usual scattered marks, abrasions, and small losses and indentations commensurate with age and use. Sides of the lower section with a few typical vertical age cracks, and losses to the back ends of the mouldings on the proper left side at the bottom of the upper section and middle of the lower section. Leather writing surface to secretaire drawer replaced. Proper left cupboard door with piece at lower corner lacking but present, and one corner rosette lacking central bud. Small trace of white paint on front of plinth. Lower section of proper right cabinet door with crack to one glass pane and three smaller cracks to another pane. Repairs and age cracks to pediment and fretwork, and central moulded square pedestal probably later. Locks replaced, with patched hole around keyhole surround at top of secretaire drawer front.

Although it is not possible to firmly attribute this secretaire cabinet to Thomas Chippendale, several characteristics of its design and construction strongly suggest his manufacture. Designed in Chippendale's early neo-Classical style, the bookcase features several of his trademarks: the scroll-carved terminals to the swan's-neck pediment (cf. The Gentleman and Cabinet-Maker's Director, 3rd ed., 1762 pl. CVIII for a 'Desk & Bookcase'); identical glazing bars to those for a 'Library Bookcase', op. cit., XCV; the pattern of gilt-brass handles often used by the firm (cf. a commode at Goldsborough Hall, supplied by Chippendale, circa 1770); the astragal moldings to the cupboard doors below, with concave corners mounted with flowerhead roundels (cf. a drawing for a library table in The Metropolitan Museum of Art, New York, with an identical door and an engraved design for a desk and bookcase, op. cit. 1762, pl. CVII).

Solid mahogany timbers are found throughout; the pine shelves to the upper section are stained red and faced with mahogany; the doors below are veneered in beautiful matched flame veneers on mahogany panels and the use of the lustrous mahogany fronts to the secretaire drawer (with stamped brass axe-head handles, cf. a secretaire at Paxton, C. Gilbert, The Life and Work of Thomas Chippendale, 1978, vol. II, p. 60), are all qualities associated with Chippendale. A secretaire with a similar configuration to the arrangement of the drawers and attributed to Chippendale was sold Christie's, London, 24 November 2005, lot 131. The left fretwork panel to the laminated pediment has been replaced; the right panel appears to be original and is cut out of the solid from a single piece of mahogany and is applied at the back of the pediment as the last laminate.

An interesting constructional feature possibly unique to Chippendale's furniture is the chamfered bottom side edge of each of the four sections; this is received into a conforming chamfered molding of each section, thereby fitting securely and avoiding sliding the two sections together from the back, thereby reducing the possibility of damaging the moldings. An unseen feature, it was more expensive to produce and a sign of fine quality.  Cf. a related secretaire cabinet sold in these rooms in the manner of Thomas Chippendale, 16 October 2009, lot 111 ($34,375 including premium), with identical mahogany drawers with gilt-metal handles to the lower section.

The concave quarter-moldings to the drawers are found in case furniture made by Thomas Chippendale and John Cobb.

See also M. Harris,  A Catalogue of Antique Furniture and Works of Art, n.d., for a very similar secretaire bookcase, with pierced fretwork panels to the pediment centered by a platform, dentil moldings and scroll-carved terminals, property of the late Dr. Sydney [sic] Martin (1860-1924), p. 66, no. F11098. Chippendale supplied a library table to the banker John Martin of Ham Court, Upton-upon-Severn, Gloucestershire, either on 5 September 1773 or 9 May 1775, that was sold in these rooms, HSBC's Corporate Art Collection, 21 October 2004, lot 34. It would be interesting to discover if these two Martins were members of the same family.