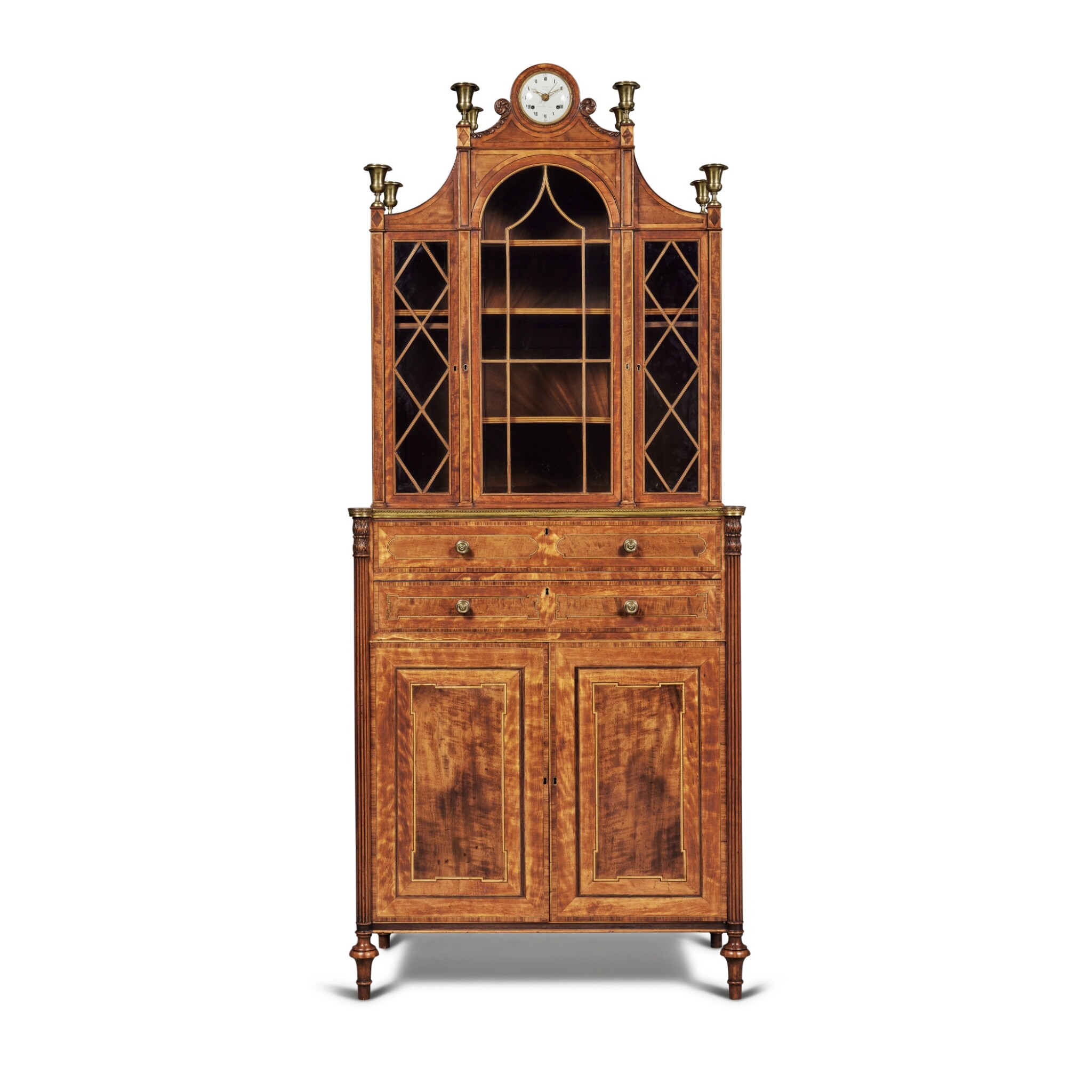 the crest with a clock with enamelled dial signed WEEKS MUSEUM TITCHBORNE STREET; the lower section with a secretaire drawer opening to an interior arrangement of drawers and a leather writing surface above a second drawer fitted with a dressing mirror and covered compartments; the two-door cupboard below originally fitted with a barrel organ movement; feet replaced

A high quality piece in reasonable restored condition. Please note clock movement not examined and not guaranteed. Uppermost section repositioned back slightly. Small moulding loss to upper section at foot of upright with dummy escutcheon. Secretaire with later leather inset which has horizontal split along fall front and typical old marks scuff and scratches. Dressing drawer very complete. Lower section interior adapted - formally fitted with an organ and now with later shelf - and return fitted with two brass covers as visible in catalogue images. Some slight bowing to cupboard doors. Generally veneers, mouldings, stringing and banding with typical minor age splits, losses, filler repairs and replacements as to be expected through age and use.

In 1797 the 'perfumer and Machinist' Thomas Weeks leased a space at 3-4 Titchborne Street, off the north end of Haymarket behind what is now Piccadilly Circus, to create a museum of mechanical objects in a similar spirit to the goldsmith and inventor James Cox's Spring Gardens Museum of automata, clocks and jewellery of twenty years earlier. The Picture of London for 1802 provides a preliminary description of the gallery prior to the official opening: 'The grand room, which is 107 feet long, and 30 feet high, is covered entirely with blue satin, and contains a variety of figures, which exhibit the effects of mechanism in an astonishing manner. The architecture is by Wyatt; the painting on the ceiling is by Rebecca and Singleton.' Among the exhibited objects were 'two temples...nearly seven feet high, supported by sixteen elephants, embellished with seventeen hundred pieces of jewellery' as well as mechanical models of a bird of paradise and a tarantula spider.

The collection also included at least seventeen secretaire cabinets of identical or almost identical model incorporating clocks and automatic barrel organs, said to be inspired by the museum building's façade. The only recorded surviving example to retain its original organ is in the collection of Lord Barnard at Raby Castle, County Durham, commissioned by Lady Catherine Margaret Powlett, 3rd Countess of Darlington in 1800. The cabinets all share the same distinct form and have been attributed to the London cabinetmaker George Simson, based on their design similarity to a labelled cabinet with comparable satinwood-bordered sabicu veneers (illustrated Christopher Gilbert, Pictorial Dictionary of Marked London Furniture, Leeds 1996, p. 422 fig. 840). Simson was recorded at 19 St Paul's Church Yard from 1787 and traded until 1840, and was one of the subscribers to Sheraton's Cabinet-maker and upholsterer's drawing-book.