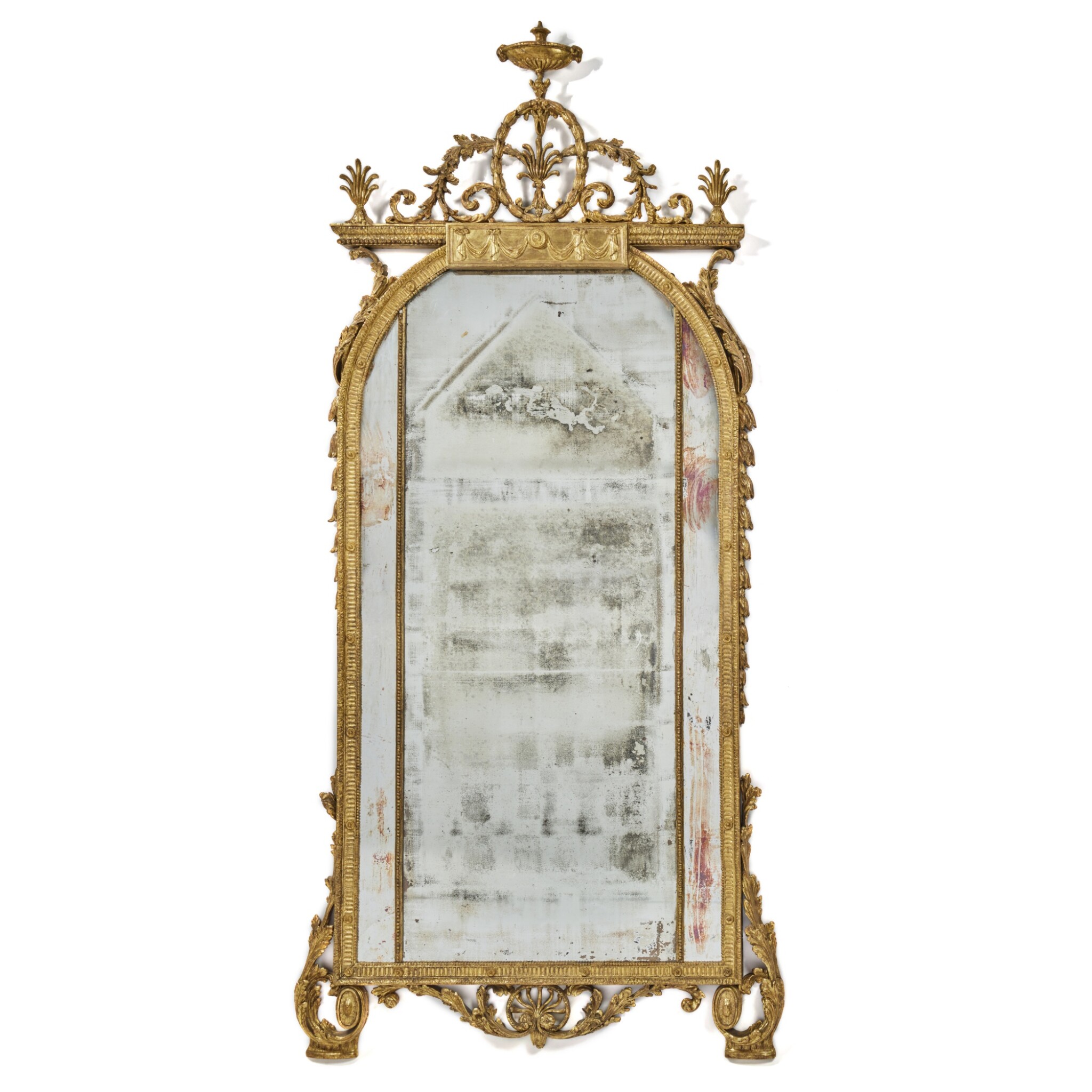 the back bearing a fragmentary label

Regilt. Later plates. Some minor losses to peripheral carving and scattered losses to gilding. Oxidization and losses to silver of central plate.

This mirror of impressive scale likely formed part of a larger wall panel scheme. It is based on a design for a pier glass appearing in plate VIII of Vol. I of The Works in Architecture of Robert and James Adam (1773). The Hyde Park mirror is almost a direct copy of Adam's composition, replacing the caryatids supporting the crest with acanthus scrolls and adding additional scrolled elements below along the bottom edge, whilst omitting the embellishments on the glass plate. A preparatory study in pen and final watercolour sheet of the design both survive in the collection of Robert and James Adam office drawings in the Soane Museum (SM Adam Volume 3/83 and 20/97); these are annotated For the Study at the Adelphi and Glass frame for Messrs. Adam at the Adelphi, respectively. The Adelphi (deriving from the Greek word for 'brothers') was an ambitious property development scheme undertaken by Robert Adam and his brothers John and James on a site in central London between the Strand and the Thames, where several dozen terraced houses were constructed between 1768 and 1772, nearly bankrupting the brothers in the process.

The most prestigious street within the district was the Royal Terrace, a block of eleven houses overlooking the river. The Adam office records indicate the mirror design was intended for the Study in the house at no. 4, which Robert and John Adam inhabited themselves from 1772 to 1778, after which they removed to nearby Robert Street. The property was then occupied by James Graham, a notorious late Georgian quack doctor and sexologist who fitted out the residence as a 'Temple to Health' but was compelled to vacate the premises in 1781 due to financial difficulties. The house passed through a succession of owners throughout the 19th and early 20th centuries, including Richard D'Oyly Carte, founder of the eponymous opera company, until the entire terrace was pulled down in 1936.

It is not known for certain where in the house the Study at no. 4 was located, or if the mirror design was ever executed, though in the text accompanying the plates in The Works of Architecture Adam does state the frame was 'made for us in wood gilt'. In the absence of any other pier glasses of this model recorded to date, it remains a possibility that the offered lot was supplied to the Adam brothers for their Adelphi house, the design undergoing modifications compared to the original drawing during either its execution or its removal from the house by subsequent owners.