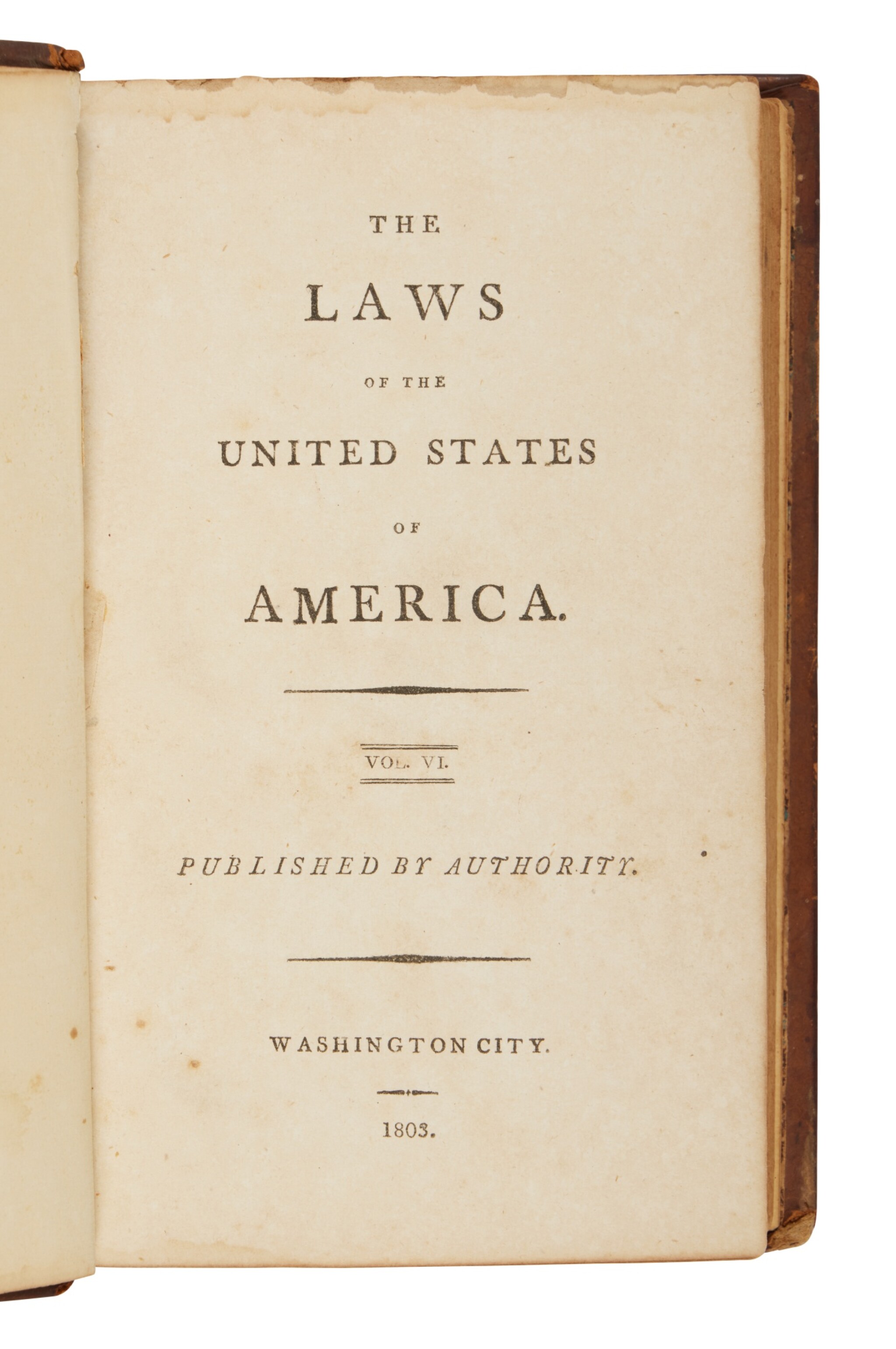 Thomas Jefferson's copy of two volumes of Laws of the United States issued during his presidency, with his cipher ownership marks and marginal annotations

A highly significant Paarband from Thomas Jefferson's library, containing some of the most significant legislation passed during his presidency, closely read and annotated by him—and a witness to the troubled establishment of the Library of Congress.

The present volume contains Jefferson's characteristic identification marks based on his initials: he has added a "T" before the signature "I" on page 65 of Volume VI and a "J" following the signature mark "T" on page 145. More notably, Jefferson has annotated this copy at a number of points. In the cumulative index to Volume VI, page v, Jefferson has written beneath the printed authorization of the President to organize the militia of the District of Columbia, "appoint Mayor of Washington 185." In the section of Volume VIII regarding treasonous acts on American waters, page 330, Jefferson has noted in holograph, "proceed[ing]s in Federal court," and on page 332 "proceed[ing]s in State court" (italics, i.e., underlining, in original). Also in Volume VII, page 339, where the text discusses the 3 March 1805 "Act to regulate the clearance of armed merchant vessels," Jefferson has made two annotations (totaling 39 words) regarding vessels sailing into the Gulf of Mexico and other waters. His first marginal note reads, "armed vessels going into gulph of Mexico give bond not to use arms unlawfully & that they should be brought back"; the second comments that "armed vessels going elsewher[e] make oath they are not going there & give bond not to go there." This Act and his annotations importantly touch on issues that would trigger his highly controversial Embargo Act of December 1807.

Jefferson’s use of the volume is also likely evidenced by the underlining of several passages in the text of the "Act to enable the President of the United States to take possession of the territories ceded by France"—that is, the Louisiana Purchase, specifically the phrase establishing that "all the military, civil, and judicial powers, exercised by the officers of the existing government of the same, shall be vested in such person and persons, as the President of the United States shall direct for maintaining and protecting the inhabitants of Louisiana in the free enjoyment of their liberty, property and religion."

Millicent Sowerby's annotated Catalogue of the Library of Thomas Jefferson records as entry 1874 Jefferson's ownership of "Laws of the U.S. 8 vols. 8vo. 1808. Mar. 4.," and a nearly identical entry appears in the 1815 Catalogue of the Library of the United States—this was the library of nearly 6,500 volumes that Jefferson sold to Congress to replace the collection destroyed by the British when they burned Washington during the War of 1812. But by 1952, when Sowerby began her reconstruction of Jefferson's library, she noted that only volumes I and V could be located: "These two volumes are the only ones extant of Jefferson's collection of the Laws of the United States. Some volumes seem to have been missing shortly after the printing of the 1815 catalogue, in the working copy of which the entry is marked 'imperfect (see)'; there is a similar entry in the manuscript list of missing books made at a later date, reading 'Laws of the United States (to be examined)'" (2: 226).

The present Paarband contains a Library of Congress bookplate accomplished in manuscript with the catalogue number "Chap. 19, No. 32," which corresponds to its classification in Jefferson's original catalogue: the thirty-second entry in Chapter 19 (Jurisprudence). This classification was subsequently changed to Chap. 23, No. 90 (matching the spine label), and it is under this designation (Civil Law, Codes, &c., Section III.—Laws of the United States, and of the Several States, &c.) that the published Laws of the United States, now comprising 29 volumes through 1829, appears in the 1830 Catalogue of the Library of Congress. This reclassification was undoubtedly the work of George Watterston, Librarian of Congress from 1815 to 1829, and Watterston was also likely responsible for discarding as duplicates Jefferson’s own copy of volumes VI and VIII of the Laws. He was acting, however, under congressional direction, the twentieth Congress having resolved on 24 May 1828 "That the joint library committee … are authorized to remove from the library of Congress in such manner as they may think expedient any duplicate, damaged, or other work or works not wanted for the use library."

This pair of titles is from the second—and most important—of three libraries formed by Jefferson. His first book collection was lost to a fire at Shadwell, his father's estate, in 1770. As noted above, the second library represented, as Jefferson wrote to John Adams in 1815, "the literary treasures which I have ceded to Congress to replace the devastations of British Vandalism at Washington." His third collection was dispersed after Jefferson's death in 1826, largely through auction.

Dating from the period of his presidency, and with his name appearing in type throughout the two volumes, these publications include much of the most important legislation passed during the Jefferson administration. Pride of place must be given to the Louisiana Purchase of 1803, by which the United States more than doubled its size. The full text of the treaty appears here, in both English and French, as well as acts enabling Jefferson to take possession of Louisiana, creating a fund to pay for the purchase, and providing for the governing of the territory.

Among other key legislation recorded in these two volumes of Laws are laws and treaties protecting United States commerce and sailors from Tripolitan pirates, laws for the governance of the Ohio and Indiana territories, and laws regarding debt, taxation, and the judiciary. A panoply of treaties with Native American nations are documented here, including agreements with the Chickasaw, Choctaw, Creek, Seneca, Kaskaskia, Eel River, Wyandot, Kickapoo, Delaware, Shawanoe, Potawatomi, and Miami.

Although Jefferson owned thousands of volumes during his lifetime, books with clear association with the third president are very uncommon on the market. Even rarer are books with content emblematic of some aspect of the polymath's interests that also display evidence of his use and close reading. In that regard, this volume of Laws of the United States is an exceptional and highly desirable relic of the man who told John Adams, "I cannot live without books."