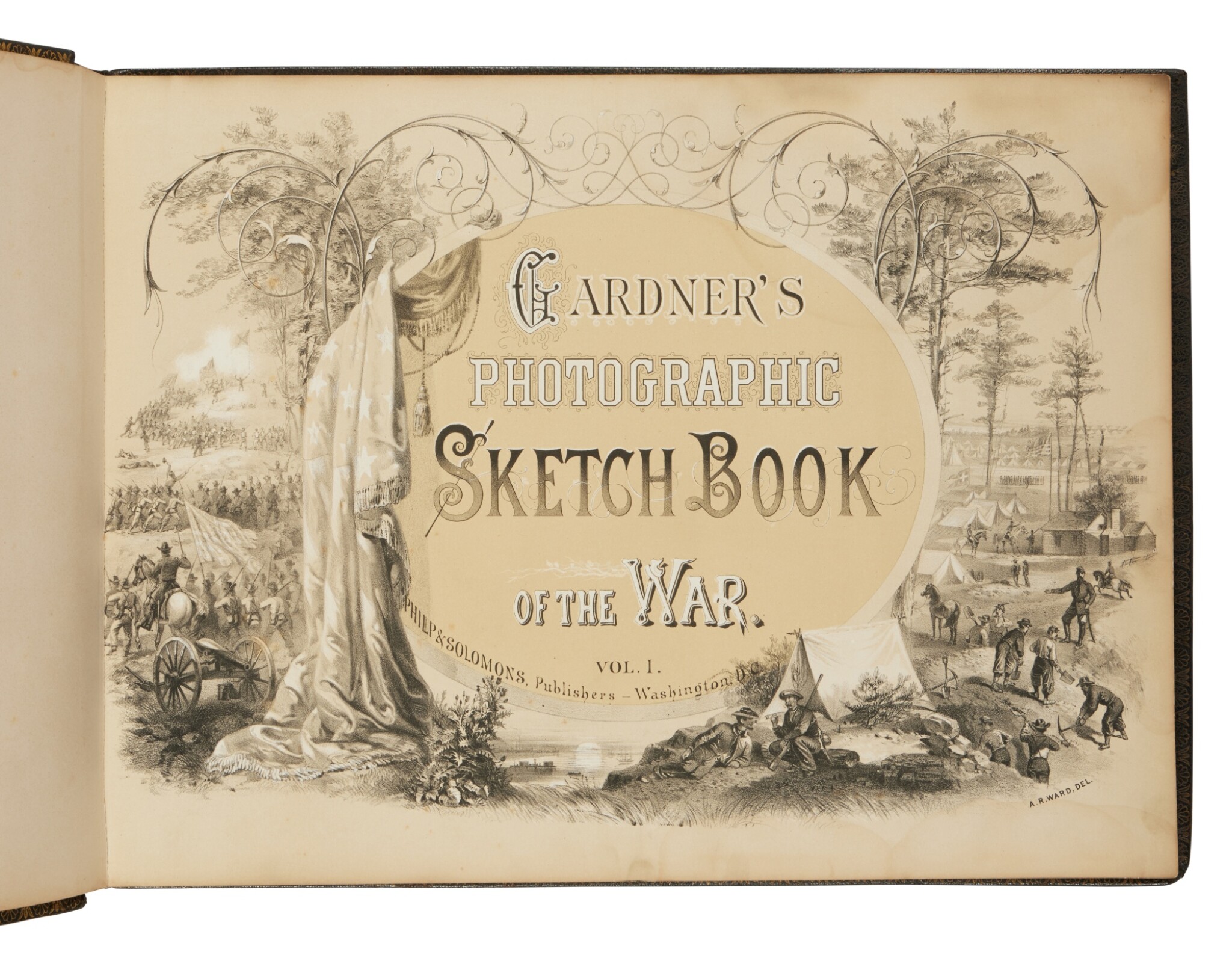 2 vols, oblong folio. 100 albumen photographs (each plate 6 ¾ by 8 ¾ in. or the reverse) printed by Alexander Gardner from negatives by himself, James Gardner, Timothy O'Sullivan, David Knox, John Reekie, William R. Pywell, D. B. Woodbury, W. Morris Smith, Barnard & Gibson, and Wood & Gibson, each on a two-toned mount printed with photographer's, printer's, and publisher's credits, and title, date, copyright, and plate number. In gilt-lettered black morocco with gilt-decorative borders and the publisher's gilt monogram, spines with raised bands in six compartments, tooled and lettered in gilt, all edges gilt; a dated presentation, in ink, in a contemporary hand on the front flyleaf.

In presenting the PHOTOGRAPHIC SKETCH BOOK OF THE WAR to the attention of the public, it is designed that it shall speak for itself. The omission, therefore, of any remarks by way of preface might well be justified; and yet, perhaps a few introductory words may not be amiss.

As mementoes of the fearful struggle through which the country has just passed, it is confidently hoped that the following pages will possess an enduring interest. Localities that would scarcely have been known, and probably never remembered, save in their immediate vicinity, have become celebrated, and will ever be held sacred as memorable fields, where thousands of brave men yielded up their lives a willing sacrifice for the cause they had espoused.

Verbal representations of such places, or scenes, may or may not have the merit of accuracy; but photographic presentments of them will be accepted by posterity with an undoubting faith.

Gardner’s Photographic Sketch Book of the War, the definitive collection of photographs of the American Civil War, is a landmark in the history of photography and in the history of the photographically illustrated book. Recognized from the start as a monument of its kind, the Sketch Book has been praised by historians and photographers alike, including Robert Taft, Helmut Gernsheim, and Beaumont Newhall. Comparing the Sketch Book photographs to the battle sketches that appeared regularly in Harper’s Weekly during the War, Newhall observed, "Gardner’s dead sharpshooter, his long rifle gleaming by his side, is not imagined. This man lived; this is the spot where he fell; this is how he looked in death. There lies the great psychological difference between photography and the graphic arts; this is the quality which photography can impart more strongly than any other picture making" (The History of Photography: From 1839 to the Present Day, 1964, p. 71). Four decades later, cultural critic Susan Sontag commented of the Sketch Book, "To photograph was to compose (with living subjects, to pose), and the desire to arrange elements in the picture did not vanish because the subject was immobilized, or immobile" (Regarding the Pain of Others, 2003, unpaginated).

This two-volume set of Alexander Gardner’s Photographic Sketch Book of the War is remarkable in that it carries a dated, personal presentation, in ink, on the front flyleaf: "To our dear sister Mary / From Sam and Kate / Jan. 1. 1867." The original subscriber of the Sketch Book offered here, with its early presentation, is likely to have been someone of means—someone eager to acquire the set within a year of publication, and someone with more than a casual interest in the conflict. Published by Philip & Solomons, the volumes became available to subscribers near the end of February 1866, and that they were an expensive purchase—at that time, $150 for the pair, or around $2,808 in 2022.

Although the projected edition of Gardner’s volumes may have been as large as 200, Anne Peterson, Curator of Photographs at the DeGolyer Library and an authority on the Sketch Book, has located evidence of only 90 sets, more than half of which are in institutional collections. In her ongoing census of the Sketch Book, Peterson notes that only a handful of copies with a documented, early acquisition date are extant. The Boston Athenaeum purchased a set in July of 1866, followed by the British Library in May of 1867, and the Library of Congress in 1868. Generals Grant, Sherman, and Meigs owned copies, as did Commodore Matthew Perry, although the dates of these acquisitions are unknown.

A detailed report for each plate is beyond the scope of this condition report; those wishing condition reports on individual specific plates are welcome to contact the Department. The strength and richness of the tonality of the individual prints varies throughout the volumes, from good to excellent. Occasional retouching is visible on some prints. Most plates exhibit edge-fading to a degree and, as is typical, the first and last plates in each volume tend to be lightest in tonality. Soiling, foxing, signs of handling, dampstaining, and tidelines are visible to varying degrees on most of the mounts but generally do not intrude upon the image. The text leaves are occasionally creased.

The covers are scuffed but otherwise generally clean. The spine is intact on both volumes. There is some rubbing at the joints and spines, notably on the first volume. The gilt-lettering and monogram retain their luster.

The marbled front endpaper is torn at the spine at the upper and lower edges.

There is significant dampstaining to the frontmatter and endpapers, including on the inscribed front flyleaf.

Plate 6 – The preceding text page has a small tear at the lower edge.

Plate 17 – In raking light, long scuffs are visible in the right portion of the image.

Plate 36 – There is some excess yellowed mounting adhesive on the image.

Plate 50 – There is significant rippling of the photograph.

The marbled front endpaper is torn at the spine at the lower edge.

There is significant dampstaining to the frontmatter and endpapers.

Plate 56 – The preceding text page is dogeared at the lower corner.

Plate 61 – The printed title is partially crossed out and annotated in pencil '50th US Engineers Winter of 1865 near Poplar Grove Church, Va.'

Plate 67 – The upper right corner of the mount is creased.

Plate 70 – The preceding text page is torn at the lower edge.

Plate 80 – There is insect residue on the mount near the right edge.

Plate 92 – The preceding text page has a minor tear at the lower edge.

Plate 99 – There are small abrasions to the emulsion at the upper edge of the image. Foxing on the mount intrudes upon the upper portion of the image.

Plate 100 – Foxing on the mount intrudes upon the upper portion of the image.